Will Patagonia’s ownership help save the planet and its retail business? 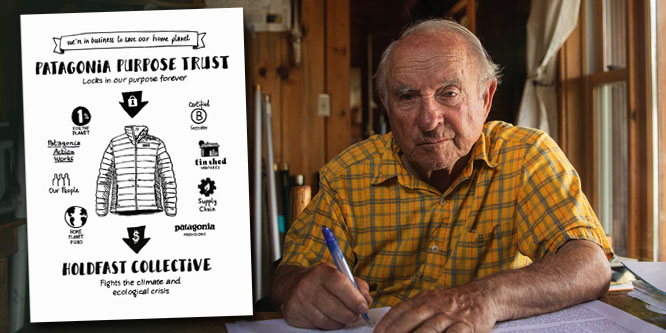 Patagonia founder Yvon Chouinard announced last week that he is giving away his company to combat climate change.

Mr. Chouinard and his family transferred ownership of the privately-held company, reportedly valued at about $3 billion, to a trust and a nonprofit organization, the 83-year-old founder said in a letter titled “Earth is now our only shareholder.”

Overseen by members of the family and close advisors, the trust owns two percent of Patagonia’s stock, but all the voting shares and will be tasked with protecting Patagonia’s existing values and independence. Patagonia expects to generate and donate about $100 million annually, depending on the health of the business.

Mr. Choiunard wrote of “reimagining capitalism” and said: “While we’re doing our best to address the environmental crisis, it’s not enough. We needed to find a way to put more money into fighting the crisis while keeping the company’s values intact. One option was to sell Patagonia and donate all the money. But we couldn’t be sure a new owner would maintain our values or keep our team of people around the world employed.

“Another path was to take the company public. What a disaster that would have been. Even public companies with good intentions are under too much pressure to create short-term gain at the expense of long-term vitality and responsibility.

“Truth be told, there were no good options available. So, we created our own.”

The 49-year old brand will remain a for-profit and continue to be led by CEO Ryan Gellert.

The maneuver nonetheless helps the Chouinards avoid taxes. Bloomberg wrote, “The deal is structured in ways that also bring the billionaire other perks, by letting him and his family keep control of Patagonia while shielding them from tax bills that could have totaled hundreds of millions of dollars.”

The elder Chouinards may also lose motivation without profit distributions. Ted Clark, executive director of the Northeastern University Center for Family Business, told The New York Times, “If you take all the financial incentives away, the family will have essentially no more interest in it except a longing for the good old days.”

DISCUSSION QUESTIONS: Did Yvon Chouinard have better options than to transfer ownership of Patagonia to a non-profit to fight the climate crisis? Do you see the move as potentially having a negative impact on the business?

Please practice The RetailWire Golden Rule when submitting your comments.
Braintrust
"Ultimately, this is Yvon Chouinard’s company, and he gets to decide how they move forward. I admire the intention."

"To fight climate change, we need change, and this is one brilliant way to move forward."

"Let’s recognize that one doesn’t do this kind of thing willy-nilly. To do so without tax and control considerations would have been stupid."

14 Comments on "Will Patagonia’s ownership help save the planet and its retail business?"

This move is very on-message for Patagonia and shows that Yvon Chouinard lives the principles his company espouses. From a consumer point of view, it strengthens the brand’s ethical stance and should be welcomed by its customers, many of whom are concerned with sustainability. So long as Patagonia remains commercially focused and management continues to deliver what shoppers want I don’t see any negative impact on the brand.

It is smart PR but let’s be clear. His family saved over $1 billion in taxes with this move AND he still controls the company. Altruism is a good cover story but capitalism is still very much at play here.

This is the story, most people don’t move beyond the headline.

It’s impossible to say if this was the best option for Patagonia and what impact this will have on the climate crisis. But what it is for certain is that it is one of the most unique approaches to contributing to the fight against climate change we have seen in a long time. In the short term, I see this move creating even more goodwill with customers who admire and align with Patagonia’s position on climate, but it also creates uncertainty about the future for the company, its employees and customers. Ultimately, this is Yvon Chouinard’s company, and he gets to decide how they move forward. I admire the intention.

Tax avoidance is as American as apple pie, so I hardly view that as a criticism. It just doesn’t happen on this scale very often. And avoiding taxes in order to structure a mechanism to flow $100 million a year into climate, sustainability and environmental issues sounds like a great plan.

Patagonia is paving the way for retailers, brands and consumers to rethink their consumption and impact on our planet. The message is on brand and exactly the shake-up our industry needed. Just as many fast fashion brands are being called into the spotlight, every brand needs to be held accountable for their retailing and production practices. The timing is perfect and Chouinard is legendary. Hats off to Patagonia.

Let’s recognize that one doesn’t do this kind of thing willy-nilly. To do so without tax and control considerations would have been stupid. I am confident that the structure challenged the lawyers and accountants.

The alternatives noted in the discussion are the ones most people/families take in cashing out. They were rejected for good personal reasons by family.

I bristle at Ted Clark’s comment: “If you take all the financial incentives away, the family will have essentially no more interest in it except a longing for the good old days.” Ted, there are people in the world who think about things other than money.

Considering we’re talking about a billionaire here who purposefully structured the transaction to save hundreds of millions of dollars while still promising a strong influx of income to him all the while retaining control, I’m not sure it’s the case money was not a primary motivator here.

At the same time, though, Chouinard is showing he does also care very much about the environment, so that even if the decision was a cynical money-first, environment-second move, environmental causes still make out very well in the end.

How do you plan for the future at a consumer brand that is a market leader in terms of their commitment to sustainability? Sell to a lesser brand? No. IPO? It would destroy the brand. Find a non-profit organization whose mission aligns with your own? This is a really creative take on succession planning. And one that stays true to the brand, and will no doubt generate even more loyalty from beloved fans. Well done Yvon!

Patagonia has been the leader and well ahead of the industry in terms of environmentally friendly practices and is one of the first to take on mass consumerism head-on. The move to give the company to a nonprofit to further its mission of positively impacting the climate crisis is a great move and will resonate with the younger generations; customers and employees alike. Purpose alongside profits will win in the long run.

Yvon Chouinard was visionary 50 years ago when he founded Patagonia as a purpose driven company. Today, he remains steadfast with the Patagonia Purpose Trust and the Holdfast Collective. Purpose driven means an unwavering commitment to the brand, the company, the customer and, true to Patagonia, the planet. To fight climate change, we need change, and this is one brilliant way to move forward.

The maneuver nonetheless helps the Chouinards avoid taxes…. A somewhat cynical take, it seems, although I guess it points out the difficulty of evaluating (what are ostensibly) “good intentions” moves.

As for the prospects for success, I’m in the middle: a trust running a company isn’t unprecedented, and I believe the results have been what you’d expect — a tendency toward “safety” over bold ideas — but the additional complication here is the trust is burdened, if you will, with running it for a rather amorphous goal. Happily there’ll be no interference from The Market, but it may not be easy.

Look, there are lots of ways the Chouinard family benefits financially from this move, but at the end of the day, they are doing really, really meaningful things with their business. I suspect this approach could become a model for other businesses to follow, and heartily applaud the creativity, ingenuity and authenticity.

Patagonia has been promoting their brand values for some time, making it very clear what they stand for and hope to see in the world. As long as this remains, not much should look our sound different on the horizon.

The keys to future performance will be staying first and foremost rigidly focused on quality products, marketing to brand values and building a complete CX strategy, unified at in-store retail and online. Good people in leadership and customer service cannot be overlooked going forward.

Braintrust
"Ultimately, this is Yvon Chouinard’s company, and he gets to decide how they move forward. I admire the intention."

"To fight climate change, we need change, and this is one brilliant way to move forward."

"Let’s recognize that one doesn’t do this kind of thing willy-nilly. To do so without tax and control considerations would have been stupid."