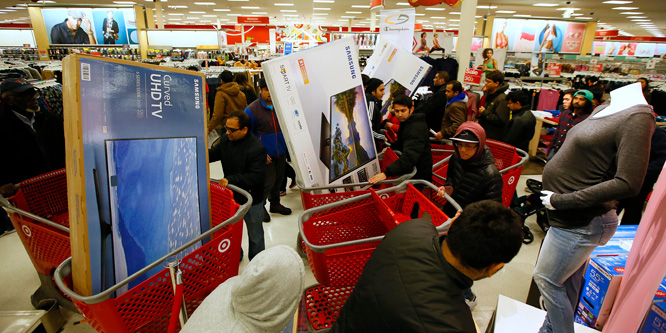 The holiday selling season is six days shorter and will include one less weekend this year. With only 26 days between Thanksgiving and Christmas, compared to 32 days in 2018, some retailers are making adjustments.

Target, for one, expects to spend $50 million more on payroll during the fourth quarter compared to a year ago because it expects less of a lull that typically occurs between the rushes of Black Friday weekend and the final weekend before Christmas. The retailer will have double the number of employees on hand to fulfill online orders in Target’s stores and will provide more help for peak weekend hours.

Walmart’s primary response to the shortened holiday season is rolling out its Early Deals Drop promotion on Walmart.com on Oct 25 — “earlier than ever.” Both Walmart and Target are also emphasizing their ease of shopping, including numerous omnichannel options.

RetailMeNot’s Holiday Insights Hub 2019 report found 54 percent of retailers planned to offer deeper discounts than they usually do due to the shortened holiday time frame, 54 percent would begin running deals earlier this year and 44 percent planned to call out the shortened time frame in advertising to shoppers.

Among consumers surveyed, 14 percent say they are stressed about completing shopping on time due to the shortened time frame, 28 percent will make their first holiday purchase sooner and 34 percent will start deal-seeking earlier in the season. Only one in three Americans in RetailMeNot’s July survey, however, were currently aware of the shortened selling season.

Speaking to Bloomberg, Craig Johnson, president of Customer Growth Partners, believes some retailers are using the compressed holiday selling period “as an excuse” and said the holiday shopping season statistically is November and December. He said, “The internet and 24/7 shopping has made those old formulas obsolete.”

DISCUSSION QUESTIONS: What sort of adjustments (if any) should retailers make this year for the shorter traditional holiday season? Do you largely agree that earlier promotions and online selling nullify the impact of the six fewer days?

Please practice The RetailWire Golden Rule when submitting your comments.
Braintrust
"No matter when Thanksgiving falls, there will always be 44 days between 11/11 and 12/25. Retailers who do not plan to that cadence risk leaving value on the table every year."

"The shorter holiday season will absolutely be used as an excuse for those retailers that report disappointing results."

"I see this as an opportunity to be more productive in a shorter amount of time."

I expect click and collect to become more important, especially after Thanksgiving, when shoppers start counting the days. If retailers reinforce this sense of urgency, customers should snap to attention. The shorter selling season could be positive overall with no need for overt compensation beyond promotional time shifts. Retailers will need to plant a sense of urgency early-on then reinforce it after Thanksgiving, when the rubber meets the road. Overall, retailers may benefit from this more consolidated time frame. It will allow them to get a clearer read on demand, earlier, if they play it right. Either way, this holiday season will serve as a great learning opportunity.

Agree. I see this as an opportunity to be more productive in a shorter amount of time. FOMO is real and asking someone to holiday shop weeks earlier could hurt profitability (ROAS) more than the upside.

The shorter selling season might be unhelpful for some discretionary categories where impulse buying is prevalent. However, overall I don’t see it as having an enormous impact on total spend: people will still buy gifts, food and other things for the various occasions; and the amount they spend will be largely governed by their confidence, finances and the quality of the offer in stores and online.

2013 was the last year Thanksgiving fell on the 28th, and it fell on the 27th in 2014. While how consumers buy certainly has shifted significantly in the past five or six years, retailers should be able to draw insights on what to expect from the past. I agree with Carol and Target that BOPIS is going to be a major factor for consumers purchasing in December.

Consumers always rise to the challenge. I think it makes it easier for employees to stay motivated especially the week after Thanksgiving when traffic typically gets soft.

What shorter selling season? Didn’t you know – holiday shopping starts with Singles Day (11/11) which also happens to be Veterans Day in the U.S. No matter when Thanksgiving falls, there will always be 44 days between 11/11 and 12/25. Retailers who do not plan to that cadence risk leaving value on the table every year.

The impact of six fewer shopping days will be difficult to notice, but it will increase the average store traffic a little across the holiday shopping days. The impact of fewer days is minimized by the trend in retailers starting the holiday deals earlier every year and the increase in e-commerce. The only adjustment that retailers may consider is adding more in-store staff to better service slightly increased store traffic.

Everyone knows when Christmas is, and there are millions of couch shoppers who’ve been selecting items to put on their wish lists for weeks now. I’ll suggest that Mr. Cornell’s plans for seasonal help are based on best practices, not on a compressed timetable.

There was a time when Black Friday was truly the kickoff to holiday shopping, and six less days between Thanksgiving and Christmas was a big deal. That time is now ancient history, with Black Friday promotions creeping well into early November. One could arguably say that Halloween is now the kickoff. A well crafted promotional calendar and a well balanced mall and e-commerce business should be able to offset any anomalies in the calendar. Let’s keep score. Who will perform well in spite of the calendar and who will blame the six lost days for soft holiday results?

The excitement of Christmas shopping is diluted when retailers begin promotions too early. A sale is only effective when there is some urgency to buy. For instance, a back-to-school sale on backpacks in June is not going to be enough to incentivize the buyer to purchase early.

As we talked about in a previous blog, one of the key factors to successful selling in a brick and mortar store is the entertainment element. If a store creates a pleasant and exciting experience, customers will come but not too early.

Online shopping is a fact of life and one-day shipping is the norm so to compete, stores must be creative in their presentations and customer service must be excellent. Six fewer days in the shopping season does not mean you should start promotions early. It means you need to focus on creativity and service within the six weeks preceding the holiday.

The shorter number of days means consumers will have to put the rollers on their shoes and get moving faster. Consumers seem to know how much time they have and react accordingly; including those who usually wait until the last few days.

I’d be shocked if the first two weeks BEFORE Thanksgiving are not much bigger than they were last year. Especially for online purchases. People will adjust, especially if retailers accelerate their holiday marketing.

These short holiday season years always affect retail results. While I read quite a few suggestions about how to beat this, they’re all attempting to confront the truth: Yup. It’s a problem.

It might be seen most clearly in the number of weekends between Thanksgiving and Christmas. Many shoppers rely on the holiday times to pace when they use those weekends. And in a year of four weekends instead of five, sales always suffer.

I don’t expect that online orders can make up for it. They might help, but shopping cart sizes in stores are always larger and that can’t be simply replaced.

The shorter holiday season will absolutely be used as an excuse for those retailers that report disappointing results. We will be hearing much more about this in January and February than we will between now and Christmas. There’s more than enough time to connect with shoppers and meet their needs.

Yes, earlier promotions and e-commerce will minimize the impact of fewer holiday shopping days in 2019.

Yet Deloitte found that 40 percent of shoppers wait until December to do the majority of their holiday shopping. As historic trends suggest, stores will be bustling in December (especially on Saturday, December 21), so retailers like Target are wise to maximize their teams of sales associates during this period.

Key success factors for the holiday sales season include:

Christmas is always on December 25th, so consumers have a clear drop dead shopping date. I don’t think the six days less will affect the big box stores as much as it will indies; these retailers will have to up their promotional game to stay in front of customers and get their fair share of holiday sales.

But I do not think that early promotions will make the holiday less significant. The golden quarter is still, and will always be, critically important to retailers.

The shorter season should not be a concern at all. We live in a commerce 24/7 world, so the length of the holiday season, as well as the significance of Black Friday is not as meaningful as it used to be. Retailers are taking a far more aggressive, proactive stance in October, which was traditionally all about Halloween. Yet now we are seeing holiday promotions, store setups, and advertisements far earlier than we have seen before.

Retailers have always had to be resilient, agile, and flexible enough to adjust for shifts in the calendar and selling season. With the lines blurring between the physical and digital worlds, BOPIS has emerged as a key differentiator to not only drive sales across channels, but to help to mitigate the last-mile challenges associated with a shorter holiday season.

Digital commerce provides shoppers with a convenient mechanism to “virtually” expand the shopping season, even in a year where Thanksgiving comes late. I see holiday merchandise displays already in place at some retailers — alongside Halloween decorations and candy. Those merchants have counted back from 12/25 to open a window of sufficient duration.

After a couple of strong holiday years in succession and with a contentious political season on the horizon, I can see how some merchants might want to prepare a palatable excuse just in case performance sags this year. Fretting about the “short” holiday season provides a cover story.

With the plethora of Pre-Black Friday sales happening earlier each year, I feel that retailers will capture those lost days by starting their campaigns sooner. Many shoppers are becoming more strategic with their spending and understand the nature of the holiday season better than before. Retailers are going to have to create a “laser focus” on their marketing strategies to capture their core customers’ attention during this shopping season. I am looking forward to watching how each retailer adapts and pivots during this season.

Overall seasonal performance relies far more upon the economy and consumer sentiment than when the holiday falls during the week. Market your stuff hard, and you’ll win.

Braintrust
"No matter when Thanksgiving falls, there will always be 44 days between 11/11 and 12/25. Retailers who do not plan to that cadence risk leaving value on the table every year."

"The shorter holiday season will absolutely be used as an excuse for those retailers that report disappointing results."

"I see this as an opportunity to be more productive in a shorter amount of time."