Will solar have its day in the sun at Target? 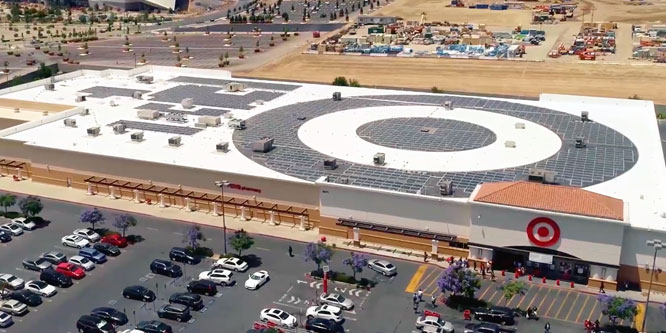 Target is testing out a new solar panel setup at one California location to see if it can successfully use the technology to power the entire store, and move toward becoming a fully renewable-energy powered chain by 2030.

In the parking lot of the store in Vista, California, about 40 minutes north of San Diego, Target put up carports with solar panels affixed to the canopies, according to CNBC.  The solar panels can purportedly generate enough energy to exceed the store’s energy needs by 10 percent and return the extra electricity to the power grid.

The Vista store location already has solar panels on the roof, which power a portion of the store. Target is taking other steps to make the location more energy efficient and environmentally friendly, as well, by implementing LED lights and low-emission refrigeration units. Target currently has solar panels on 25 percent of its 1,900 stores.

Among other retailers beginning to make use of solar are the Raymour & Flanigan furniture chain, which recently announced that it would install solar panels on-site to generate 90 percent of the power in three of its locations in New Jersey, according to trade publication PV Magazine.

Solar power adoption in big box retail has not, however, moved as quickly as advocates have hoped.

While both Home Depot and Kroger are using solar energy, solar panels are in place at only a small fraction of each retailer’s stores, according to CNN. Clean energy advocates are pushing for big commitments from large retailers like Walmart — which has some solar and non-solar green energy initiatives in play — to turn the tide towards solar.

Johanna Neumann, senior director for Environment America’s campaign for 100% Renewable, told CNN she suspected companies on the scale of Walmart, Target and Costco were waiting for a better business case. (The interview was conducted before Target’s announcement.)

Story was updated 4/15/22 to reflect Target’s ambitions to become fully powered by renewable energy — including both solar and wind power — by 2030, rather than “fully solar-powered” as initially reported.

DISCUSSION QUESTIONS: Do you see solar as being a sustainable way to power grocery stores the size of Target? How far do you see solar power going, and what is the best way for retailers to deploy solar panels to maximize efficiency?

Please practice The RetailWire Golden Rule when submitting your comments.
Braintrust
"If the technology allows it and it’s reasonably cost efficient, good for Target – I can’t see why you wouldn’t do it if it pays out."

"Using solar energy to power Target is a great move. There is so much dead space on the roofs of these buildings it makes perfect sense to put them to good use."

"Target is already using solar to power their curbside pickup areas; if they can make it work on their huge roofs, they should go all in."

13 Comments on "Will solar have its day in the sun at Target?"

Between this, the “zero” labels, and Target’s partnership with ThredUP, the retailer is clearly getting serious about the environment. Solar power is absolutely a viable sustainability move for retailers, and I hope this pushes others to consider solar and wind energy.

It’s not a question of if we should be converting to solar power in both homes and businesses, but how long it will take and at what expense. I’m currently looking into converting my own house to solar, and while I love living in a deeply forested area, it means a solar installation is going to be problematic. Big box stores don’t have a shade and proximity to trees problem. And their big footprint flat roofs just beg to be utilized for solar power. We can’t keep wringing our hands about climate change and then also keep burning fossil fuels at the current rate.

Using solar energy to power Target is a great move. There is so much dead space on the roofs of these buildings it makes perfect sense to put them to good use. After all, Target is quickly approaching nine square miles of roof space. Chains are certainly also considering geography in their rollout, as New England and Seattle stores have fewer sunny days. I support this initiative 100 percent. If they’re really going to put solar arrays in the shape of Target logos on every roof, this is a big win for their marketing team, too.

As some companies “wait…for the better business case,” the leaders that embrace sustainable energy and environmental responsibility – among other causes that are increasingly important to stakeholders – will win in the long term. The economic volatility alone in the last 75 days due to the Ukraine invasion and appropriate sanctions against Russia is making leaders investing in alternative energy sources gain ground. It’s not unreasonable to expect that to continue and companies like Target will continue to show that stakeholder capitalism has a more than compelling ROI.

Utilizing rooftop space to help generate power for the store and at the same time reducing their carbon footprint is smart for business. The good news is they can decide where to do this intelligently. With today’s GIS technology and aerial imagery it’s possible to remotely measure rooftops and forecast power production for that location based on exposure to the sun, seasonal daylight and historical weather patterns. Companies are able to see where these solar panels have the greatest potential and forecast their contribution to the location’s power needs. I strongly believe that adoption for this will grow exponentially as this technology improves.

Of course solar is a good way to go, but I’m not sure the right question was asked. Target is not a pure grocery store. Do I think you could solar power Target? As long as you buy enough batteries. That’s the dirty little secret I discovered when we tried to convert to solar at my condo in St Croix. You need batteries to store the power you’ve made, otherwise you just sell it back to the electric companies. Do I think solar is enough to power a traditional grocery store? Depends where and when, right? It might need a traditional electric boost. I live in Miami, and I have a couple of concerns 1.) I haven’t gone solar because I have a one-story house and everything becomes a projectile in a hurricane and will smash the panels. 2.) “Going green” is more than how you power the physical plant. It’s also what you sell. So we have a LEED compliant Staples store here, but no way are the contents being sold environmentally friendly. No… Read more »
0
|
0
-   Share

If the technology allows it and it’s reasonably cost efficient, good for Target – I can’t see why you wouldn’t do it if it pays out. If they think it will increase store traffic though, they will be sadly disappointed. We Americans are notoriously poor at supporting such efforts with our shopping dollars.

Target is already using solar to power their curbside pickup areas; if they can make it work on their huge roofs, they should go all in.

Gordon Moore in 1965 forecasted that the number of transistors in an integrated circuit would double about every two years. While it has slowed a bit, it is still progressing at a surprising rate. Solar is experiencing the same type of technological breakthroughs. In the last decade, the cost of solar has decreased by 85 percent. Will it drop by 85 percent in the next decade? Did you ever imagine your computer’s memory would be measured in gigabytes?

Solar will be common in powering the retail store itself, and It will generate additional power that will be sold back to the grid.

It may not be enough to power every store based on a limited number of sunny days in some areas, but it can help and should be a consideration for other brands. It’s nice to see a big brand like Target focused on environmentally friendly initiatives.

My Walmart is 2 minutes away. My Target is 20. Target continues to give me reasons to happily make the drive and give them my business — and this is another. Keep it up Target!

Solar can be a great way to power grocery stores and various other retailers. In San Diego, we have high schools, performing arts centers, and multiple retail banners with both rooftop installations and carport installations. It can be all done in the right location and if it makes sense financially.

After a while it becomes ho-hum. I think that it is important for retailers not only to make these moves but find ways to communicate the benefit in the store to their customers. Something credible that could really hit home would be to have a free cellphone charging unit that is a benefit from the solar power efforts of the retailer.

Solar is without a doubt a more ecologically responsible alternative for Target. But I’m curious:

Braintrust
"If the technology allows it and it’s reasonably cost efficient, good for Target – I can’t see why you wouldn’t do it if it pays out."

"Using solar energy to power Target is a great move. There is so much dead space on the roofs of these buildings it makes perfect sense to put them to good use."

"Target is already using solar to power their curbside pickup areas; if they can make it work on their huge roofs, they should go all in."