Will Target hit the bullseye or miss with its store remodeling plan? 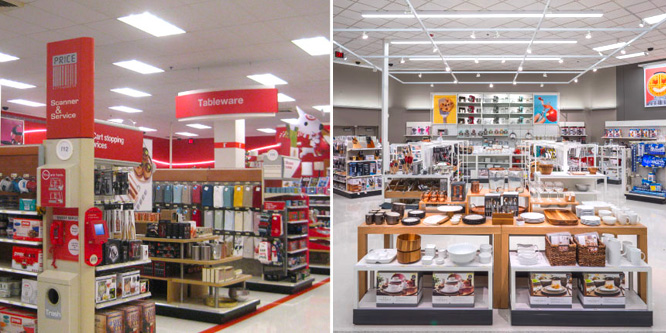 Target turned in a record performance last year and has followed that up with a great and even better-than-expected start in 2021. The retailer has no plans to rest on its laurels, however, as evidenced by an update issued yesterday on its multi-year plan to renovate existing locations to improve the shopping experience (in-store and online) for its millions of customers.

Target COO John Mulligan said on the company’s first quarter earnings call last month that the company would complete 34 store remodels by the end of the second quarter and more than 100 others by the end of the year. He said that more than 100 Ulta in-store shops would be completed in the second half and that Apple shops would be opened in others, without specifying a number.

“Beyond the direct impact on sales, these transformations create an ideal platform for all of the merchandise innovations and service enhancements that we’ll launch over time,” he added.

Target CFO Michael Fiddelke said on the same call that the store remodels, combined with big investments the retailer is making in improving its supply chain, will “support both replenishment and fulfillment” from Target’s stores.

The chain, which fulfills almost all its online orders in stores, has seen significant growth in Shipt same-day delivery, in-store and curbside (Drive Up) pickup. It has managed this feat while growing in-store traffic, as well. The Drive Up service has achieved the fastest rate of growth and generates the highest net promoter score (NPS) of any service among Target’s customers.

The retailer is also looking to expand the number of its locations, keeping stores at the heart of everything it does. Target opened 30 new locations last year, 29 of which were its new small format stores, and plans to continue opening between 30 and 40 new locations going forward. The small stores are tailored to meet the needs of customers living and working in cities, college campuses and densely populated suburbs.

20 Comments on "Will Target hit the bullseye or miss with its store remodeling plan?"

Target’s remodeling plans are forward thinking and compelling. Target is exactly right to think of their stores as “platforms” with the ability to adjust and flex to the changing needs of consumers. The integration of new products and services is what makes this really compelling. Ultimately a great shopping experience is one that satisfies the shopper – however the shopper individually defines it – and the intentional design Target is undertaking increases the probability of delivering one.

Store design is at the heart of Target’s brand message. It has always been known for clean, bright, well-organized stores as long as I can remember. Design enhancements like the Ulta and Apple shops make Target a more interesting place to shop (not just a big red-and-white box), but the company is smart to learn from its deliberately paced rollout of these changes.

Target’s changes to its store layout and product offering are based on changing customer buying behaviors and brand preferences. Omnichannel shopping experiences are changing the ways shoppers interact with stores and brands like Target are adapting to new customer expectations. The Apple and Ulta in-store shops will increase store traffic to Target stores and drive incremental sales.

I did a comparison between my local Target that has yet to be remodeled and several in the area that have. The difference is night and day.

The older version Target is essentially a clean vanilla box with exceptional product and very little specialty merchandising. The remodeled stores are beautifully merchandised and just plain fun to shop. The kitchen and home areas are what department stores used to be.

The Target Syndrome, where you go in to buy a single item and walk out with a cart full of things that you hadn’t intended to buy, will be alive and growing in the new stores.

Target has demonstrated over the past several years it can anticipate what customers are looking for, and this is the latest iteration of that. Store remodels are key to driving that fun, engaging experience that shoppers crave and helps keep them loyal to Target. By differentiating the in-store experience, Target can help ensure its physical store footprint remains meaningful, especially since stores are at the center of its e-commerce fulfillment model as well.

We did two studies (2,500 folks each) in the past year and although the majority of those surveyed say that online shopping will be their primary form of shopping going forward, they still ranked the importance of “in-store experience” very high. In-store experience was listed as; store associates, way finding, check out, assortment and of course, store design/ambience. Given the strength of those studies, I’d say Target’s move is not only excellent, but necessary to stay ahead of those that don’t and to keep today’s shopper coming back.

Target’s remodel aligns well with the new world of omnichannel retail. They’ve picked the right in-store brands and partners like Ulta. Their brighter space with more elbow room plays well post-pandemic, and they’re optimized for BOPIS. It would be interesting to get onto a new Target store’s roof to see if there’s a drone port up there, too. I believe the best single store source is Target by a wide margin.

Sooner or later, all retailers are going to have to figure out efficient and effective product pick-up areas. I think all the elements of store design are great.

I welcome Target improving its planning and inventory management. That’s probably going to have the biggest impact of all. The company has been trying forever, but it never seems to get the inventory balance quite right at an SKU level.

The remodels are clean and simple and tech-forward. From the outside bullseye design and the merchandising space inside, there is more defined space for pickup/online ordering. Micro departments are delineated (they also tell stories of product, sustainability, etc.) but carry the same overall color scheme of the store to keep the concept cohesive.

Target has been paying attention to what the customer wants and has developed one of the best and most nimble design teams for a multi-vertical retailer. At every juncture over the past five years they have been among the first to test – small format stores, e-commerce, same-day shipping, innovative brand partnerships, white label product lines, ship from store, BOPIS — all well before COVID-19. Target was even the very first pop-up concept in the U.S. back in the 1980s. There is a reason they are consistently on the top 10 list of retailers in the U.S.

Target is certainly on a roll. I’m lucky enough to live in the Twin Cities where these remodels are mostly complete, and the stores look fantastic. The atmosphere is modern and updated, the assortments are focused and on point and, most importantly, the stores are very easy to shop. The expanded capacity to stage BOPIS and curbside pickup, with bigger storage for temperature-controlled items for example, has allowed Target to increase overall capacity and efficiency in delivering these high demand services, and to expand the number of SKUs they’re able to offer to their customers. Target has done a masterful job pivoting their business model during the pandemic, they demonstrate a laser sharp focus on their guest and are not afraid to make significant operational changes to meet their needs. They continue to build on their strengths and put more separation between themselves and their competition.

T1 is just a few blocks from my house – containers with construction supplies are lined up in the outer lot for this summer’s work, and the dust has barely settled on the e-commerce tweaks they installed last year! Their commitment to continuous updates keeps the experience fresh and my mind alert to new discoveries each time I walk in the door.

As consumers spend more at fewer stores, Target’s refresh gives it an edge for convenience, speed and sensory appeal.

Target never rests, and that’s part of the secret to their success. They’re always two steps ahead. I’d love to be privy to their planning process.

My local Target happens to be one of the stores undergoing a huge remodel. The scope of the project is impressive. One-third of the parking lot has been given over to containers housing all the equipment and material needed for the project. And yet the store is open and humming along. What I will be most anxious to see will be how they treat their owned brands — those proprietary brands doing over $1 billion each. I get the Apple shop, but highlighting their own brands is what gives them true distinction and differentiation. Target is not just the modern department store, they are becoming the model modern retail experience.

I really don’t see how anyone can think this will put Target behind the curve. As previous remodels showed, there is a very strong link between creating a compelling and engaging shopping experience and producing an uplift in sales. Of course, if Target was only investing in stores there may be cause for concern – but it isn’t, it’s equally investing in online and multichannel. Finally it is worth noting Target’s attitude: with significant success already in the bag it would be very easy to become complacent — that they’re not doing that speaks well of management.

Best Buy and Walmart have also said reformatting their stores to support curbside and in-store pickup will continue to pay off, so Target is in good company in that way. The edge Target has always had is that people genuinely enjoy the browsing/discovery aspect of the experience they create. So allowing the Ulta and Apple store within stores to shine with new fixtures is a brilliant way to draw less habitual shoppers in while playing up the experiential side habitual shoppers already love.

In the age of growing online grocery, the future of physical retail is experiential. I have always thought Target were a class apart in creating a welcome atmosphere for shoppers. It is not very surprising that they continue to raise the bar on that and are creating a platform that could bring products and services together to, hopefully, drive a differentiated experience for the customer of the new era.

Just a few years back (pre-COVID-19) Target announced a major investment in store remodels to improve their grocery presence and BOPIS capabilities – setting the stage for phenomenal results when COVID-19 hit. This is a natural progression for retail winners who are recognizing that 80 percent or more of sales still occur in-store, rethinking new store-within-a-store concepts like Disney, Ulta and Apple and capitalizing on fulfillment lessons learned.

I always remember what Walmart did when they remodeled their stores. They listened to the customer and rather than change every store, they only updated a few (can’t remember the exact number). The response was positive. Customers liked the store better. The impact on sales was … NOTHING! Good to know before changing every store. I’m sure Target is taking the same approach. If not, I hope they’re reading our experts’ comments on RetailWire!