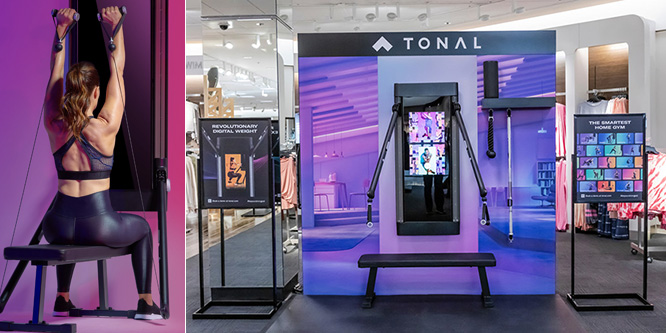 Nordstrom released news earlier this week that it has struck a deal with Tonal, the smart home gym and personal trainer device and service, to open 40 of the fitness brand’s shops in 20 states across the U.S.

Nordstrom and Tonal will roll out the 50-square-foots shops this month and offer Nordstrom shoppers the opportunity to see a demonstration of the tech in-store and to engage in a workout.

Lori Marten, vice president and divisional merchandise manager for Nordstrom, said the retailer understands that “customers are looking for inspired workouts that elevate their wellness ambitions.” She expects the new Tonal shops to help fill that need.

“Our goal is to help customers discover the latest active gear for style, performance and everything in-between, and we look forward to making it easier than ever to discover everything in one place so they can look and feel their best,” Ms. Marten added.

The retailer announced that fourth quarter sales in its “Active” category had grown by double digits.

Nordstrom joins many other retailers and consumer-direct brands that have looked to cash in on the at-home fitness and athleisure renaissance that coincided with pandemic lockdowns and new work-from-home routines.

Lululemon, the yoga-inspired retail chain, announced last June that it had reached an agreement to acquire Mirror, an in-home fitness startup featuring a wall-mounted device that streams live and pre-recorded classes. The deal, finalized last year, followed a $1 million investment that Lululemon had made in Mirror in 2019.

Calvin McDonald, Lululemon Athletica CEO, said on the company’s third-quarter earnings call that his company expects Mirror to generate more than $150 million in sales revenue for the full fiscal year.

He said that Lululemon had launched a dedicated Mirror tab on its website during the quarter that included a link to purchase the device. Lululemon is also now including Mirror in its email campaigns.

Lululemon also began its planned rollout of Mirror shops inside its stores at 18 locations. The goal is to test and refine the selling experience before the chain rolls out the concept to several hundred stores this year.

DISCUSSION QUESTIONS: Do you think in-store Tonal shops will help Nordstrom position itself as a destination for athleisure products and fitness? Will more retailers and/or consumer-direct brands follow the lead of Nordstrom and Lululemon in making deals with fitness tech companies?

Please practice The RetailWire Golden Rule when submitting your comments.
Braintrust
"This is absolutely on trend and will attract a lot of attention in the stores. Now we'll see what Nordstrom does with that new attention."

"Female technical athleisure apparel is the new couture, so to speak. Apparel designers are keen to evolve this category right in step with the fitness tech companies."

"I believe Nordstrom is better suited — no pun intended — than Lululemon to enter the fitness technology arena."

I like the way Nordstrom’s is turning high-end fitness into a fashion accessory. And while I’m not sure this will deliver a ton of incremental sales, I think it’s an interesting play for Nordstrom. The fact is, if someone is really serious about fitness they probably don’t think of Nordstrom. As retailers search to expand their offering into new categories, I definitely see more consumer direct brands pursuing relationships with retailers like Nordstrom.

It’s a good addition and gives Nordstrom a chance to bolster its credentials in the booming athleisure and wellness markets. However to be successful it needs to be part of a wider strategy to build out an offer around these themes. It’s no good just sticking someone else’s offer in a huge department store and hoping it will have success. Especially so when in many malls where Nordstrom has stores, consumers have easy access to Lululemon, Peloton and a whole raft of other fitness retailers.

The in-store Tonal shops will definitely increase consumers’ perception of Nordstrom as a place to shop for atheisure merchandise. Many brands have pivoted to take advantage of the growing trend of at-home exercise that was driven by the pandemic. Many people, including myself, have learned that we can achieve a comparable workout at home without going to a health club. With the added convenience of exercising at home, I see this become a long-term trend that will negatively impact the health club industry.

To me, this is more about improving their “fitness cred.” It’s a broader trend to improve differentiation by showcasing more exclusive offerings, attracting new customers and giving new reasons to visit their stores.

Whether Tonal shops in Nordstrom will enhance Nordstrom’s brand in the athleisure space will have much more to do with Nordstrom than Tonal. In my opinion. how Nordstrom manages the adjacent assortments will ultimately determine their brand equity in these categories.

It’s a start – but like Lululemon, why not just buy the brand and create functioning mini-studios in the stores (like they’ve done with their cafes/restaurants). This trend is huge and it could create greater loyalty and more consistent traffic than a 50 square foot space.

It is risky for a retailer to pick a winner in an emerging space like this. Lululemon has much higher margins to play with, similar to Under Armour’s connected tech investments.

I think it’s low risk for both sides. Picking winners in a new category is difficult — such is the case in connected fitness. Nordstrom doesn’t have the margin of a brand, hence stores-within-a-store make sense. They can get paid to offer a new product that appeals to their health-conscious consumers.

If it’s different from what other stores are offering it can be better, and it promotes a healthy active lifestyle image that many Nordstrom shoppers aspire to.

I don’t mean to pooh-pooh the fitness craze as I have been a gym rat since I got out of college. But I wonder, when the pandemic is over and we are all free and clear, will we start seeing all this fitness equipment on the curb?

I believe that while many folks will swarm back to their gyms once the pandemic is over, many more will continue with the home gym — provided they have the space for it. Why would you ever want to go back to the gym if you can do the same in the safety of your home?

It’s not the fitness equipment that will be tossed to the curb, but the gym memberships.

The partnership with Tonal is a move by Nordstrom to meet its goal of increasing concessions from 5 percent to 30 percent of its business model. The Tonal shops will add to the experience of shopping in Nordstrom but will not become a destination for athleisure products. The partnership seems more beneficial to Tonal by expanding its footprint. Nordstrom’s appeal is directed at fashion apparel goods and a great shopping experience. Tonal adds to the latter. A broader strategy would be to incorporate Zella (the Nordstrom Made line) into the experience with Tonal. Perhaps having fitness demonstrations in the store will add to the experience.

Female technical athleisure apparel is the new couture, so to speak. Apparel designers are keen to evolve this category right in step with the fitness tech companies. I think Tonal is smart for Nordstrom. A new high-level immersive experience for the in-store Nordstrom shopper. Online, an innovative merchandising strategy to launch Nordstrom as a relevant leader in the quasi-new female technical athleisure consumer marketplace.

It’s an interesting move by Nordstrom. I’m not sure a Nordstrom athleisure shopper is expecting to find exercise equipment in the store, but maybe that’s the point. Nordstrom may be doing this to alter their customer’s perception of the brand as a source for all things athleisure, athletic, exercise, and wellness. It feels like a bit of a stretch for Nordstrom but, then again, I give them credit for trying something new and bold. This will be interesting to watch and see if they expand it to more stores or if it ends up fading away.

I love the idea — now let’s see how execution goes. This is absolutely on trend and will attract a lot of attention in the stores. Now we’ll see what Nordstrom does with that new attention. They are typically exceptionally good at execution so I expect this to be a win for them.

Yes, it will absolutely enhance their fitness credibility to their coveted affluent consumers. Per the press release, Tonal has 90 percent share of the intelligent fitness market and now have access to Nordstrom in key markets. They say follow the money but I think it is also important to follow the data. As consumers make the decision to invest in Tonal, it also creates an opportunity for investment in hundreds of dollars of clothing. It will be interesting to see if this partnership extends to the access for Nordstrom to advertise on Tonal or to learn collaboratively about the affluent fitness consumer for their mutual benefit.

This move does update Nordstorm’s image, and these fitness brands reach to the same demographic. However there is a disconnect in shopper intention – am I going to Nordstrom for my fitness needs?

This is a perfect example of how the business model and product content of department stores should be, and sometimes is, evolving. I’ve watched over the past several years as Nordstrom keeps taking more and more fixtures off the floor and spreading the remaining fixtures farther and farther apart. They’ve installed a large BOPIS/Customer Service area at the front of one store where a shoe department used to be.

Nordstrom has recognized that the nature of their relationship with the customer is changing. They have space to invest in new businesses as portions of their existing business moves online. So taking a step into the wellness, fitness, athleisure business makes abundant sense.

That looks like a promo, not a real gym in a mall. Where is shower?

I believe Nordstrom is better suited — no pun intended — than Lululemon to enter the fitness technology arena. You would be hard pressed to find another premium retail brand that could do this.

It’s a smart move by Nordstrom and Tonal. As stated Nordstrom’s active category doubled in the 4th quarter and I’m certain the numbers for men’s and woman’s suiting and formal are atrocious — all a function of the pandemic.

Tonal is an affinity brand for Nordstrom’s core consumers and like all new technology it will benefit from having a showroom at Nordstrom. Conversely, it strengthens Nordstrom’s growing active category and brands and aligns with the branded shop-within-the-store concept (like Suitsupply).

Even without the pandemic, this would have been a smart move by Nordstrom to strengthen the relationship with their core consumers as the demographics shift.

Braintrust
"This is absolutely on trend and will attract a lot of attention in the stores. Now we'll see what Nordstrom does with that new attention."

"Female technical athleisure apparel is the new couture, so to speak. Apparel designers are keen to evolve this category right in step with the fitness tech companies."

"I believe Nordstrom is better suited — no pun intended — than Lululemon to enter the fitness technology arena."