Will Walmart’s Baby Savings Day grow up to be a big retailing deal? 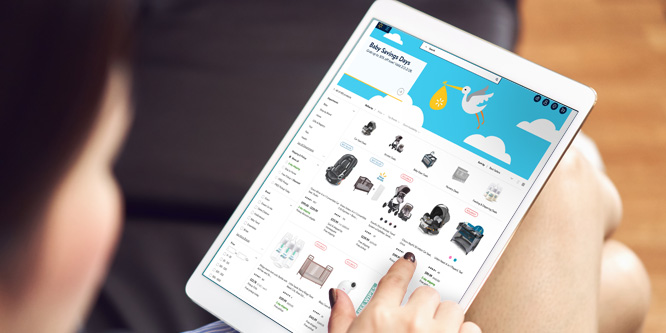 Earlier in February, Walmart quietly launched a new retail holiday that’s being described by some as a Prime Day for babies.

The chain announced that February 23rd would be its inaugural Baby Savings Day, featuring discounts on cribs, formula, car seats and other baby-related supplies lasting from 10:30 a.m. to 4:30 p.m. in most of the chain’s stores, according to The Motley Fool. Walmart has also announced additional deals on baby goods online throughout the entire month of February.

The timing of Walmart’s Baby Savings Day may be significant, as it coincides with a month-long discount on baby gear at Amazon that was widely publicized throughout the parenting blogsophere earlier in the month.

At least one report about the first Baby Savings Day indicated that the chain had not made good on its promise to parents. Shoppers were greeted with only limited signage and promotion outside — some balloons and a demo table — according to Fox 10 Phoenix. Visitors complained of few if any deals, little more than a reusable Walmart bag containing some coupons. Some said better deals were available on Amazon. It is not clear, though, how much the efforts varied from store to store, given the large number of locations participating.

With more than a million Millennials entering motherhood each year, according to Pew Research, babies are big business. And recent shakeups in the baby products space, including the closure of Babies “R” Us alongside its parent chain Toys “R” Us, have led to a couple of big-name retailers besides Walmart beefing up their assortment of binkies and buggies to build a baby base.

Earlier this year, for instance, Target launched about 30 new private label baby essentials, with most of the brands being priced below $10, according to CNBC. This pricing puts the products 30 to 40 percent cheaper than the national average.

And even before Babies “R” Us went belly up, retailers were looking at ways to become baby supply destinations. Discount grocer Aldi, for instance, launched a line of private label baby products in 2016, which it promoted with a 12-date tour offering sample products at parent-friendly street festivals throughout the U.S.

DISCUSSION QUESTIONS: Will Baby Savings Day have a significant effect on Walmart’s share of the baby products category? Considering the comparisons to Prime Day, are you concerned about Walmart’s ability to execute consistently across its thousands of locations as well as online for a promotion such as this?

Please practice The RetailWire Golden Rule when submitting your comments.
Braintrust
"Perceptions matter. This year’s event didn’t deliver as promised; next year’s has to be amazing or it will fall off of the customer’s radar."

"With Babies “R” Us gone, parents have a huge missing resource gone from their lives..."

"The challenge is how do we curate the store for the eye and pocketbook of the shopper, not the convenience of the buyer."

12 Comments on "Will Walmart’s Baby Savings Day grow up to be a big retailing deal?"

I doubt that Baby Savings Day will have a significant effect on Walmart’s baby category – especially the way it was so poorly executed. But let’s not forget, Walmart wrote the book on how to compete in retailing – I wouldn’t throw the baby out with the bathwater because of one poorly executed promotion. There’s no doubt that Walmart will recalibrate and continue to make advances in the category.

I am continually amazed at the amount of gadgets considered necessary to raise a child these days. As a new grandmother, I bought most of them. Executed properly, Walmart’s Baby Savings Day has the potential to be an anticipated annual event. But it has to be done right both at store level and online, and that’s a big task for Walmart.

Perceptions matter. This year’s event didn’t deliver as promised; next year’s has to be amazing or it will fall off of the customer’s radar.

With Babies “R” Us gone, parents have a huge missing resource gone from their lives — a friend told me as much this week. Walmart (and every other retailer in this category) need to get smart fast about how to fill that gap, but in a way that delivers it in a more elevated strategy. The devil’s in the details, however — here’s hoping that a stronger team gets behind planning, marketing and executing this platform next time!

It’s one thing to say, “Let’s take on Amazon.” It’s quite another thing to then do it in an amateur fashion. I suspect/hope this was a big learning moment for Walmart. For some reason they rushed and executed poorly. Walmart can’t let that happen again.

I think, no I know, there is some call for damage control here. This is what happens when a business tries to mimic what a competitor does. If a retailer tries to offer the same/similar experience to their customers that the competitor has already instituted, the promotion must have qualities that have not been seen before to hold their customer’s enthusiasm and love for the store. No empty promises. Walmart got some bad press on this and now needs to recover. And I hope every retailer remembers; when you mimic and follow competitors’ actions, the competitor is actually running your business. So make it bigger and better and certainly not stale news while you definitely have the merchandise and in-store efforts clearly planned to make the celebration come to life.

Walmart’s focus on the baby business is a good move however I, for one, don’t see a baby savings “day” as a huge hit. Baby needs and purchases come all throughout the year and the new mother to be can’t really time her need for that new crib to just February. My suggestion to Walmart is to beef up the baby department and have some special activities and deals for the new or about-to-be parents that go on continuously. Then make sure there are specials and hoopla in baby goods on days such as Prime Day. As a mother, grandmother or grand aunt, such as I am, I need to make my purchases when the baby comes. And that’s my 2 cents.

Watson’s the Hong Kong Drug chain has a store for mothers and babies. In Brazil there is a store for allergy sufferers. All based on the idea of facilitating both the sale and the relationship. Walmart could curate a baby/mothers department bringing together clothes, diapers, formula, strollers — everything in the store for babies — and call it a Walmart Baby Savings Center. Tie it to Walmart.com and you might have a monster. The challenge is how do we curate the store for the eye and pocketbook of the shopper, not the convenience of the buyer.

Based on some of the reactions from consumers that were underwhelmed and disappointed with the discounts and promotions they saw at Walmart on “Baby Savings Day,” it probably was a not a huge success. Families with children are a prime customer segment for Walmart and disappointing them risks losing their loyalty. Successful execution programs and promotions is imperative to meet customer expectations and delight them — which is essential for loyalty.

Another “retail holiday.” Just what the world needs … not!

Okay, maybe I’m being cynical. There’s certainly demand for the items, and as noted, something of a wreck in the supply train; but I think the demand side may actually be a problem. Most of the goods mentioned are staples that you’d buy all year long, or they’re things you only need “when you need ’em.” So I’d question the logic of setting aside a day for them. But we’ll see.

Creating a continuous community space (physical and digital) for the baby category makes much more sense than manufacturing a single savings (holi)day.

There are many reasons for the demise of the “R” Us group. What is obvious and rarely investigated in depth is the consumer aspect of the business. Baby showers, first birthdays and the first four or five Christmas seasons are about the total extent of heavy investment. E-commerce with its free shipping, product availability and low prices gutted the Brick & Mortar sales for most of these items.

A third aspect rarely discussed of this scant market place is that it resides in the land of “hand me downs.” The only bright spot in the market is developments in electronic learning and observation devices and the enhancements being expanded through the Internet Of Things. Walmart will do okay with the commodities in this business, but it will likely not add to the long wait times in their checkout lines.

In ten years, when I cringe at “Baby Savings Day,” the same way I cringe at other Hallmark holidays, I’ll fully accept the strategic genius that is Walmart. The program is low-lift, not resource intensive, and cuts the competition … while “Baby Savings Day” sounds questionable, it’s efficient, smart, and likely effective.

Braintrust
"Perceptions matter. This year’s event didn’t deliver as promised; next year’s has to be amazing or it will fall off of the customer’s radar."

"With Babies “R” Us gone, parents have a huge missing resource gone from their lives..."

"The challenge is how do we curate the store for the eye and pocketbook of the shopper, not the convenience of the buyer."