Will Walmart’s latest test ‘pave the way for autonomous delivery’? 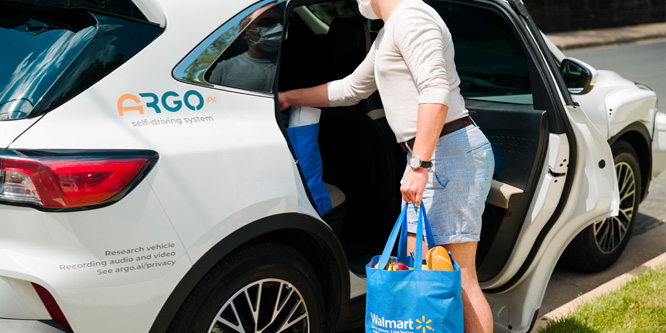 Walmart and Ford announced yesterday that the two companies are working together to launch an autonomous vehicle delivery service in Austin, TX, Miami and Washington, D.C.

The program is not Walmart’s first program testing autonomous vehicles, but it is the first to be done on a multi-city basis. Ford will supply Ford Escape hybrid vehicles controlled with Argo AI self-driving technology. Ford is a financial backer of Argo.

“We’re excited to expand our autonomous delivery efforts in three new markets alongside Argo and Ford,” said Tom Ward, senior vice president of last mile delivery, Walmart U.S., in a statement. “This collaboration will further our mission to get products to the homes of our customers with unparalleled speed and ease, and in turn, will continue to pave the way for autonomous delivery.”

Later this year, Walmart will make the service available to customers within defined areas in the three cities and plans to expand over time. Consumer expectations around deliveries,  particularly the growing need for speed with next-day and same-day options, is a driving force behind the retailer’s autonomous vehicle push. Walmart is looking to develop insights into how the use of self-driving technology affects the customer experience and its role in optimizing logistics and operations.

The retailer expects to benefit from groundwork laid by Ford and Argo in Austin, Miami and the nation’s capital. The two companies have been operating in Miami and Washington, D.C. since 2018 and started in Texas’ capital city a year later. Walmart worked with Ford in Miami in 2018.

“Our focus on the testing and development of self-driving technology that operates in urban areas where customer demand is high really comes to life with this collaboration,” said Bryan Salesky, founder and CEO, Argo AI. “Working together with Walmart and Ford across three markets, we’re showing the potential for autonomous vehicle delivery services at scale.”

The pilot with Ford and Argo is just one of several that Walmart has pursued.

The retailer has worked with Nuro in an autonomous delivery test in Houston. Nuro was the first company to be granted permission to operate fully automated vehicles on public roads in Arizona, California and Texas.

DISCUSSION QUESTIONS: Are artificial intelligence systems learning at a fast enough pace to convince you that autonomous deliveries will be viable within the next decade? What do you see as the likely future role of autonomous delivery vehicles at Walmart, in particular, and in retail more broadly?

Please practice The RetailWire Golden Rule when submitting your comments.
Braintrust
"Autonomous vehicles for delivery will mean retailers won’t have to worry about driver availability shortages or driver-caused slowdowns."

10 Comments on "Will Walmart’s latest test ‘pave the way for autonomous delivery’?"

The pace of evolution is breathtaking and I do believe that autonomous deliveries will become viable within the next decade – assuming regulations to control activity can be sorted out. This will be complicated. But the demand for home delivery will only increase – pandemic or no pandemic – and so the business case for autonomous delivery will only become more compelling as we go forward.

It is great to see autonomous vehicles tested in a real-world environment. There are a lot of hurdles to to plan for and it will be interesting to see how successful the test is for Walmart. Autonomous vehicles have been tested by other companies and we haven’t seen an acceleration in use so I assume the tests haven’t been successful or there isn’t a compelling ROI case yet. It is definitely an interesting space to watch.

Autonomous vehicles are one of the potential answers, and one piece of the puzzle. Depending on the location (rural, suburban, downtown) the next 10 years will see drones and autonomous vehicles taking center stage. Both have been in the pilot/concept phase for long time, but are still five to 10 years away.

Segmentation by product type and urgency will drive the choice as well – low weight and urgent items via drones and bulky ones via traditional methods.

Neighborhood fulfillment centers also are an important piece of the puzzle, for under 10 minute deliveries.

Coming back to Ford/Walmart, they are making sure they are placing the bets and will not be left behind. There is no certainty that autonomous vehicles will be a significant carrier of groceries in 10 years.

I see the future, and it is here — today — on our streets! The companies pushing the technology for autonomous vehicles and deliveries are getting closer and closer to a tipping point where this becomes normal and not something being tested in just a few cities. I predict within five years we will have moved from testing to actually using this in virtually every market that meets the criteria of autonomous delivery vehicles.

A key indicator for me in regard to AI is the growing popularity of the use of Siri and Google Assistant by consumers worldwide. Both are powered by artificial intelligence and get smarter with use, day by day. There is no question that AI systems are learning fast and it is vital that companies like Walmart run these pilot programs to give emerging tech companies, like Argo and Nuro, a controlled real-life scenario to develop products that will become mainstream within the next decade. Kudos Walmart, and rock on!

This makes sense for both sides. Walmart potentially gets ahead of the competition when it comes to autonomous delivery but for Ford it offers a form of test bed for their technology to prove it at scale while also building credibility in the eyes of consumers. This credibility can then be used to sell autonomous offerings to other organizations.

As the bar of grocery related convenience continues to rise, Walmart are potentially getting very much ahead of the curve.

Autonomous vehicles for delivery will mean retailers won’t have to worry about driver availability shortages or driver-caused slowdowns. This takes the human error element out of delivery, which is a major step. I do believe this will change the delivery game within the next few years.

It is interesting to see the auto industry and the retail industry coming together to solve the last-mile challenge. As much as the evolution in the AI systems is important for the viability of autonomous delivery, it is more important that the people are able to trust that these vehicles will not cause any harm or havoc. Over the long term, autonomous vehicles will be able to drive the last-mile delivery costs down due to less reliance on drivers.

The key point here is “defined areas.” Let’s see how this trial works out there first; I have doubts about widespread adoption.

Braintrust
"Autonomous vehicles for delivery will mean retailers won’t have to worry about driver availability shortages or driver-caused slowdowns."