Would a Not-Amazon.ca-like effort help indy retailers compete with the online giant? 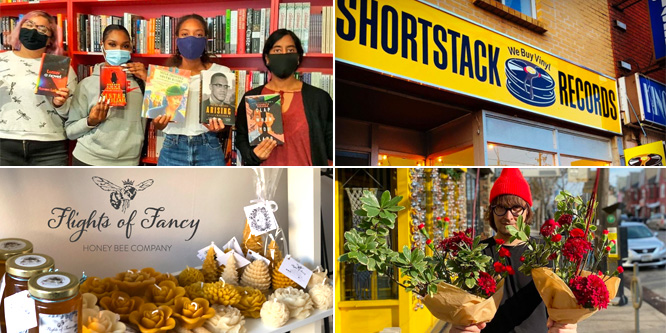 A website with a provocative domain, Not-Amazon.ca, has seemingly overnight become a go-to directory to reach more than 4,000 independent stores across four Canadian cities. The success is more surprising considering it was created by a social media manager as a side project with no plans to make money.

“Hell no! It’s all volunteer baby!,” the 27-year old founder Ali Haberstroh answers in the FAQ section on the site on whether Not Amazon makes money.

The site’s inception began on Nov. 22, the day before Toronto went into a second partial lockdown, when Ms. Haberstroh built a Google spreadsheet with categories and links to local shops offering curbside pickup and deliveries to remind herself to shop locally. She shared her list on Instagram and then decided to turn it into a website. She purchased the Not-Amazon.ca domain for $2.99 Canadian.

The domain name reflected her frustrations that big boxes and Amazon.ca had thrived during the pandemic as Toronto’s mom and pops faced extinction. All the shops offer nationwide shipping, curbside pickup and local delivery.

“Jeff Bezos has made enough money this year,” Mr. Haberstroh told Toronto’s NOW magazine. “My goal with this whole thing is to make it almost impossible to use the excuse that shopping with Amazon is more convenient.”

She further told The Guardian that she wanted the site to mimic Amazon in “having everything in one place.”

Not Amazon has expanded beyond Toronto to Calgary, Halifax and Vancouver and earned significant media coverage. Many articles include interviews with shop owners attesting to spikes in online traffic since being featured on the site. According to a Jan. 2 New York Times profile, the website has garnered more than half a million page views.

The site is now submission-based with thousands of businesses waiting for Ms. Haberstroh’s approval. More cities are planned to be added.

Not Amazon came along at a time when numerous surveys have shown that consumers are eager to support local businesses significantly impacted by the pandemic and a minor backlash has been seen against big boxes and major online sellers that have done well during the crisis.

DISCUSSION QUESTIONS: Would a website such as Not-Amazon.ca work in the U.S.? Is it possible and does it make sense for independent retailers in the U.S. to collaborate on a national basis?

Please practice The RetailWire Golden Rule when submitting your comments.
Braintrust
"A website that acts as an aggregator for local merchants is a great idea. "

"I think Ali Haberstroh is amazing! Half a million page views since November 2020, when she transformed a spreadsheet into a small, local business marketplace in a pandemic!"

"It seems to me that this has been done here already, and since I can’t remember the name of the website that tells you how well it worked."

13 Comments on "Would a Not-Amazon.ca-like effort help indy retailers compete with the online giant?"

While there might be some interest in this, at a basic branding level, a retailer should be building up their own website, their local connections, and should collaborate locally. This is essentially trying to build a brand in a crowded market where consumers won’t really know what they are getting other than a listing page of random merchants. This reminds me of the 3/50 project from a decade ago that seems to have run its course.

In theory, yes, small businesses should be building up their own website. In practice, many small businesses do not have the time to do such a thing. Building your own website and engaging in brand outreach takes more effort than using a Wix template and starting a Facebook page. It involves things like SEO, targeted ads, etc, etc, not to mention the internet infrastructure that is likely to be involved. This concept is a good one. It is the ecommerce equivalent of the Japanese bumblebees that ball up to take down the giant invasive wasp. One platform where small businesses can team together to create one cohesive directory/marketplace is a good thing and certainly has a place in the market, and actually in some cases, is a better idea than trying to be a one man band and take on retail titans alone. My one gripe with the website is that it’s called, “Not Amazon,” which is just branding mistake 101, since you have your competitor’s name in your website even if it’s painted in… Read more »
1
|
0
-   Share

As much as I love living in Arizona, Ali makes me proud to also be a Canadian. Good for you Ms. Haberstroh! I love this idea and it would be a great platform supporting the Buy Local movement.

I have no doubt this will fill a niche of those who, like the founder, think “Jeff Bezos has made enough money.” But that doesn’t sound like a sustainable shopping experience.

In the end, their success is a matter of being able to fulfill shoppers needs. Can they offer what Amazon offers (or for that matter Walmart or Target)? Can they get me what I want the next day or in two days? Is it easy to return? Can I purchase something for $3.99 and not pay $5 for delivery?

There is a certain appeal that smaller, local stores have relative to the national chains. Buy Local has put a giant exclamation point on that feeling and gives Not-Amazon.ca a real reason for being. A website that acts as an aggregator for local merchants is a great idea. Amazon will still have a formidable presence, but this might give smaller local merchants some critical mass that will elevate their competitive profile.

It seems to me that this has been done here already, and since I can’t remember the name of the website that tells you how well it worked.

Indies have worked together before and during the pandemic with “Hops” – blog hops, website hops, Facebook Live hops, sharing customers who hop from one site to another. It’s such a great way to attract new customers it will continue far into the future.

It all depends on the category and the execution. Bookshop.org does this for independent bookstores and specifically targets Amazon. And the indie booksellers I know seem to feel it is moving the needle in their direction. But let’s face it, there is a lot more to Amazon than just inventory and there is already a significant “Buy Local” movement in most major cities. So could something like Not-Amazon.ca work in America? I guess, if it combined a “values proposition” with a value proposition.

I think Ali Haberstroh is amazing! Half a million page views since November 2020, when she transformed a spreadsheet into a small, local business marketplace in a pandemic! Not-Amazon.ca demonstrates the power of how local folks feel about their little guy/gal businesses. Where customer engagement and satisfaction are measured by strengthening local communities around shared product interests, while at the same time investing in the future of local retailers. An emotional tradeoff beyond the reach and convenience of one-day shipping featuring hourly shipment tracking alerts.

Great idea, don’t count them out and look for others to copy. In the beginning, no one thought that Craigslist would survive.

While it would be a good addition to the landscape, the reality is that anything you buy from Amazon, Walmart, Target etc. (even from a marketplace vendor on their site) is a low risk transaction backed by those gold standard names. If returns, remediation and refunds aren’t backed by the marketplace I think it will have a more limited appeal.

Rather than seeking ways to differentiate themselves from the retail and digital giants, independent retailers should focus on what makes them unique and authentic, and on one-to-one relationships with their valued customers. At the surface, a Not-Amazon.ca effort could backfire, and the independent retailers should concentrate on their brand, the experience they offer, and what binds them to the local communities they serve.

Independent retailers now have an outstanding platform in Shopify to help extend their digital reach and enable them to provide agile fulfillment options during these uncertain times. An anti-Amazon strategy is not the way to go when customers are already returning to their downtowns and community stores.

Independent retailers are amazing: they resisted the rise of department stores in the 1800s and of big box retailers in the 1900s — among others thanks to their adaptability and focus on a very specific, local community. Internet is a tough nut to crack though because it has created a giant shopping mall where being heard is challenging and expensive. Many had no or a sub-par website moving into the pandemic and, just like big box retailers 10 years ago, are struggling to define their online strategy. They still hold a key advantage that this initiative might be able to leverage though: they are much closer to their local customer than Amazon will ever be, both from a physical and from a marketing perspective. The next few years will be extremely insightful.

First things first: does it (even) work in Canada? The site is less than two months old so we don’t have a lot to go on. But assuming it does, keep in mind why Amazon “works.” Largely, it’s because of uniform policies. Indeed, most people probably think of Amazon as just one big company, rather than a virtual department store of owned and (essentially) leased departments. Independents by their nature tend to resist conformity (I suspect it’s no small part of why they aren’t part of Amazon at present, although of course there are many other possible reasons).

Braintrust
"A website that acts as an aggregator for local merchants is a great idea. "

"I think Ali Haberstroh is amazing! Half a million page views since November 2020, when she transformed a spreadsheet into a small, local business marketplace in a pandemic!"

"It seems to me that this has been done here already, and since I can’t remember the name of the website that tells you how well it worked."