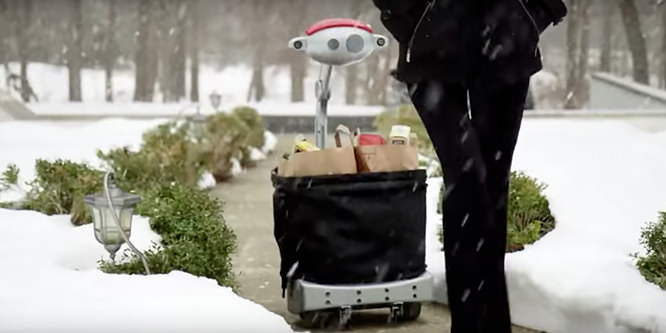 Walmart is testing a robotic shopping cart capable of helping customers shop, check out and even motor out to the parking lot without being pushed by a human.

At the Bloomberg Technology conference last week, Wendy Roberts, CEO of Five Elements Robotics, acknowledged that her company is working on a project with the “world’s largest retailer” that was later confirmed to be Walmart.

Last December, Five Elements Robotics introduced Budgee, “the friendly robot that follows you and carries your things.” Budgee can follow its owner via a transceiver that the owner carries or wears. The cart weighs 22 pounds, can carry up to 50 pounds, and folds up for easy transportation and storage.

The Walmart cart prototype presumably would scan a customer’s shopping list and then take them on the best route to pick up merchandise around the store, although exact details aren’t being revealed.

Wrote Will Knight, senior editor, AI, for MIT Technology Review, “While robot shopping carts might be a little unnecessary, it makes a lot of sense for Walmart to try to understand how automation may disrupt its business just as much as e-commerce already has.”

At retail, advanced robotics have largely been tapped to help warehouse workers perform repetitive tasks such as goods delivery, pick and pack, and surveying. In early June, Walmart confirmed plans to test the use of flying drones to handle inventory at its warehouses with an eye to potentially using them for inventory checks in-store.

The tech-cart experiment comes amidst the hype around driverless cars, even as consumers remain skeptical. According to a recent survey by the American Automobile Association, 75 percent of drivers are afraid to get into a fully automated vehicle due to safety concerns. Some, particularly men, feel such cars would “take the fun out of driving.” Like other surveys, younger generations were found to be more open to trying them than older ones.

DISCUSSION QUESTIONS: Would driverless shopping carts enhance the shopping experience in a store like Walmart? Do you expect consumers to have reservations similar to those expressed about driverless cars?

Please practice The RetailWire Golden Rule when submitting your comments.
Braintrust
"It won't be an overnight success, but it's not entirely far-fetched."

"Machine intelligence, artificial intelligence, and deep learning are at the heart of what the future holds not only in today’s R&D, but tomorrow's."

11 Comments on "Would ‘driverless’ carts enhance shopping in stores?"

The inventions of the shopping basket and cart have already proven to increase basket size by making it easier for shoppers to collect more items on a single store trip.

An assistive robot like this would need to be unobtrusive and responsive, but with those characteristics it could definitely improve the experience of big box shopping. It won’t be an overnight success, but it’s not entirely far-fetched.

OK — so it may be cool and may even create a trial bump if rolled out. Hard to believe it would ever pay out, which is what Walmart should be worried about. Honestly, we could all use the exercise (however minimal) that pushing a shopping cart entails.

Are you kidding me? Why don’t we invent driverless robotic couches so shoppers can lie back and not have to move at all! Stephen has it right, if we can’t even push a cart we’ve reached a point of degeneration I’ve never imagined. I can’t wait for the next series of pictures of Walmart shoppers.

Robotic shopping carts may work in environments in which the walking distances are long and parking lots are large. However, the cost of putting these devices in stores can’t be cheap and it would take a long time for them to pay for themselves in incremental sales or even in customer loyalty.

While having a driverless shopping cart might be a neat novelty item, it’s hard to see how it would bring value to a retail business. Although I would be interested to see how this plays out in warehouse setting where it could potentially save a lot of time and money. A major selling point for retail stores is the human interaction and a driverless shopping cart seems to further remove the customer from that interaction.

Interesting to think about, neat to build. But no ROI will make it a dud.

Walmart will most likely learn some stuff about how to use robots in the shopping experience, but will it create an ROI? My answer is NO. In fact, it will cost sales. Just think about the fact that the cart takes you on the shortest path and no impulse purchases are allowed.

This is an example of a solution looking for a problem. Driverless cars are one thing, but shopping carts are not necessary and would do much to impede the standard traffic flow in a store (these are larger than standard carts and move slower), plus their impact in a standard-size aisle appears to be greater given their slower speed. Plus the safety issues for infants and small children (would you put one of these in a cart like this?), or what would happen if a young child suddenly runs in front of a cart … would it stop in time? This use of robotics raises too many issues in light of the small advantages it offers.

Machine intelligence, artificial intelligence, and deep learning are at the heart of what the future holds not only in today’s R&D, but also for tomorrow’s successful business models. Whether it’s driverless cars or carts, the direction is to learn more about applications of this new frontier in computing and intelligence and, just as importantly, on the human-machine interaction. I see Walmart taking steps to ensure that their existing scale and relevance continues into the next decade on an even higher trajectory. While we may put on our practical hats and snicker at the notion of driverless carts, the upside here transcends the experiment and will provide important learning for Walmart upon which they can differentiate their brand and the shopping experience. What I find riveting is that for a company that represents the status quo more than any other in retail, Walmart is actively pursuing the potential of disruptive technologies in order to maintain its leadership. How well it learns and infuses these initiatives into a new company DNA will determine its future success and… Read more »
3
|
0
-   Share

Seems like retailers HAVE to seek out crazy tech to make their investors happy. Unfortunately, most of what I’ve been reading about are classic examples of tech products desperately in search of a reason to exist. (I came out of tech. That’s the way the great many engineering operations work — they build what they can then hope it finds someone who cares.)

If Walmart was leading with this as a targeted idea for certain kinds of customers (like to help vision impaired shoppers) then I’d believe them. But it sounds far more like they’re just leaping onto the “driverless” bandwagon and hoping someone cares.

Pretty sad to see. What do consumers really want right now? Good product, well merchandised in a store they like to shop in. A combination of innovations there that are surprising, fun, interesting along with the staples well displayed, easy to find, and smartly priced.

I am filing this idea under the heading of “No ROI Guaranteed.” The issue with motorized carts as I learned when I took part in testing motorized carts for a Japanese startup is that the carts are a constraint. Some people walk fast and some walk slow; carts go one speed. Also, everything from weather to kids wreak havoc on the carts causing the need for constant repairs. Instead of motorizing carts, a better idea is to make carts more vertical. In test after tests that I conducted across multiple store formats, no other design had a bigger impact on the shopping experience than making carts more vertical as well as making sections of baskets detachable to allow a consumer to wander away from their cart to retrieve items. Another item that I tested was a screen that fits into the cart that displays a consumers exact location in the store. I designed the system so that a consumer could download a shopping list and the software would design the optimal route for the consumer… Read more »
0
|
0
-   Share

Braintrust
"It won't be an overnight success, but it's not entirely far-fetched."

"Machine intelligence, artificial intelligence, and deep learning are at the heart of what the future holds not only in today’s R&D, but tomorrow's."