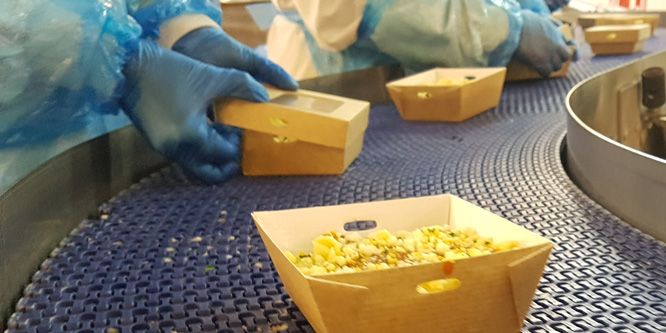 When it comes to food safety innovation, not many industry experts would consider Amazon.com a leader. The online retail giant is working diligently to change that opinion as it strives to do in fresh foods what it’s done in books and dozens of other categories.

Carletta Ooton, Amazon’s vice president, health, safety, sustainability, security and compliance (wow, that’s a mouthful), outlined the company’s approach to food safety at the 2018 Food Safety Summit, held last week in Chicago. Ms. Ooton described Amazon’s innovation as a mission critical element for the retailer, one that has the support of every level of the organization, up to and including CEO Jeff Bezos.

During her keynote, Ms. Ooton shared a few case studies to explain the company’s food safety strategy. One of the examples showed how the company uses physical process control in the deli slicing operation to reduce the risk of food borne illness and contamination. All steps — from the unwrapping of the bulk meat or cheese to the individually packaged orders being prepared for delivery — are scanned, and the data is collected to track shrink dates and alert workers to any potential issues.

A second case study involved the use of machine learning for detection and assessment. Amazon uses natural language processing to detect customer sentiment found in 16 million emails, phone calls, chats, product reviews and social media posts on a weekly basis and uses the findings to alert managers of potential contamination or other issues. For example, a series of negative product reviews allowed Amazon to detect a food safety issue and block a product 57-days before it was recalled by the manufacturer.

Ms. Ooton said Amazon views food safety as a non-competitive issue, insisting the company is working with its suppliers and others to strengthen the recall process and reduce weak links in the supply chain. She wouldn’t discuss the food safety activity at Whole Foods, the chain bought by Amazon last year, saying the systems of the two companies have not been integrated.

DISCUSSION QUESTIONS: Do you see Amazon’s innovative approach to food safety providing the company with another competitive advantage? Can competitors emulate Amazon’s food safety procedures? What do you think the combined Amazon-Whole Foods food safety operation will look like?

Please practice The RetailWire Golden Rule when submitting your comments.
Braintrust
"I guess now that Amazon has so much at stake with grocery, they have decided to not simply comply, but go all-in in typical Amazon fashion."

"This is not so much competitors needing to emulate what Amazon is doing, but rather Amazon having to catch up. "

"...has me wondering, will Amazon use technology to absolve humans from the responsibilities of everyday life under the guise of deli ham?"

Amazon is doing what’s necessary to meet consumer expectations about food safety. This is good for the company and for the industry. Competitors should be equally transparent about their food safety procedures. This could become a competitive advantage for Amazon if other retailers don’t respond.

Amazon has the processes, data and analytics to make a huge difference in food safety, as well as freshness. As in so many areas, if Amazon can execute on new standards of food safety it raises the bar for the rest of retail. If there is one thing that trumps low price, it is quality food that has a reputation for safety. In that sense, Amazon’s food safety procedures are the right thing to do, and a competitive advantage. However, no one is immune from food contamination issues. One massive outbreak and Amazon will scramble for reputation and loyalty like anyone else. The recovery advantage for Amazon is that with their data and systems they may be able to react faster.

Fascinating, given that Amazon avoided registering some of their fulfillment centers with the FDA for more than 10 years. According to a recent Marketwatch article, “Amazon has told FDA investigators over the years that it believes it doesn’t need to register, the reports show — prompting, in essence, a nearly decade-long stalemate.”

I guess now that Amazon has so much at stake with grocery, they have decided to not simply comply, but go all-in in typical Amazon fashion.

Fresh and safe are THE critical success factors for food retail success and, this being so, Amazon will assure that these are not stumbling blocks in its march toward global domination. The information value chain of data, statistics, information, knowledge and wisdom will undoubtedly guide Amazon’s directions as it inserts itself into the food supply of households, businesses, restaurants and other finished food providers.

I believe the initiative is a great idea, I believe it’s doable, but based on the Amazon PR machine and Amazon being almost entirely hype regarding Whole Foods, I’ll believe it when I see it.

Amazon is masterful at throwing big ideas out that the press chokes on as it tries to swallow them down so quickly, even though so much is spin and fluff. BTW – How are those dirigible warehouses coming along?

To date, less than 1 percent of Whole Foods merchandise has lower prices — far from 1 percent. And as a twice-weekly Whole Foods shopper, we see the bare shelf spaces and hear the complaints from employees we know.

So I invite Carletta Ooto to reach out to me when Amazon really has something to show for this, not just talk.

Trust and transparency have become the minimum customer expectation these days. Especially as it relates to food — where it is sourced from and the all-important health and safety regulations. Amazon is wise to stay ahead of this curve, as consumers have raised their concerns and, in general, the level of health consciousness has risen.

Other retailers will be very wise to follow Amazon’s lead.

This is not so much competitors needing to emulate what Amazon is doing, but rather Amazon having to catch up. The Global Food Safety Initiative has been led by major retailers and manufacturers since at least 2008 and the latest food safety effort is a global consortium of the largest retailers and brands leveraging the blockchain and machine learning capabilities. So this is more Amazon trying to make a big press splash as usual rather than joining a global, innovative effort that’s already moving down the track. It nevertheless is always good to see an organization take this initiative seriously.

Right on, Ralph! Amazon’s PR prowess is powerful … hoping that it will raise the visibility and scale of successful efforts already underway.

I am sure that Amazon are genuine in their drive to improve safety in fresh foods and there are some great aspects to their work in using Big Data to identify issues faster and therefore drive quicker recalls. However, the biggest issue with fresh foods is still the control of inventory, shelf life and the maintenance of temperature within the supply chain. This may lead to widespread issues but more often results from small local issues of poor operational standard and inventory management. Getting this aspect right is vital to not only safety but also efficiency and profitability of the retailer. Too often retailers look at their short life products as impossible to manage by automated systems and leave this task to their local management, busy people who are not experts in inventory management and not the ideal people to be doing this role. Centralizing this operation can save the company in inventory, wastage and improve customer service all of which improve the bottom line. What it also does is help to ensure that freshness… Read more »
1
|
0
-   Share

Food safety will never become an advantage for Amazon. They must do something to fight back against the negative perceptions that naturally arise when a massive international behemoth starts slicing ham.

Perhaps this is a smart PR offensive. But when I attempt to shift my personal interaction with the individual slicing my ham at Kroger to the idea of factory/fulfillment slicing at Amazon, the cognitive dissonance is anything but mild.

Retailers should recognize this and let Amazon go attempt to solve their problem — but they should not let this PR effort cause them to make changes.

The advantage here, pardon the pun, is Amazon’s ability to take a “fresh look” at the end-to-end needs of food safety. Working with or around existing systems and processes is the norm for most retailers, which sometimes stifles innovation as it’s hard to get your head around considering something completely different. Maybe starting from scratch is a good way to go.

Is it really “innovative” to rely on technology as the premier defense in the detection of food safety issues? The fact Amazon can “detect public sentiment in 16 million emails, phone calls …,” etc. per week, is stunningly impressive! As I eat my processed, controlled deli ham, I can’t help but hope the human serving the ham is still accountable for the safety of the ham. Which has me wondering, will Amazon use technology to absolve humans from the responsibilities of everyday life under the guise of deli ham?

Amazon is using data to better manage food safety. Amazon has a distinct advantage because of their data, and parlaying this into changes in products, operations, systems and processes, will enable Amazon to create new inroads into food safety, customer satisfaction and the retail systems built around this.

Now that Amazon owns a grocery chain and is growing home delivery of groceries, food safety is an imperative.

While food safety is extremely important, it is table stakes in the grocery segment. Amazon’s focus on food safety may not necessarily drive more customer loyalty, but it will help them reduce the number of health violations and food safety incidents and respond quickly to manufacturer recalls. In todays wired economy news of recalls travels quickly (I am avoiding Caesar Salad after the recent romaine lettuce scare).

It is all about protecting customers and the brand so this will be top of mind for Amazon as well as their competitors.

Amazon has shown in the past that they can be extremely successful with innovative approaches. With the technology and big data they possess, they are definitely able to set a new standard in food safety, if they do it right.

Although only briefly mentioned here, I find it fascinating that Amazon was able to identify and act on a food safety issue two months before the manufacturer officially recalled the product. When considering Amazon’s massive review collection and stellar customer service, they just might be the right party to lead this fight. I’m not sure that this will amount to a competitive advantage, but few (if any) retailers can rival their reviews. I see this more as another reason for consumers to trust and buy from Amazon.

Braintrust
"I guess now that Amazon has so much at stake with grocery, they have decided to not simply comply, but go all-in in typical Amazon fashion."

"This is not so much competitors needing to emulate what Amazon is doing, but rather Amazon having to catch up. "

"...has me wondering, will Amazon use technology to absolve humans from the responsibilities of everyday life under the guise of deli ham?"