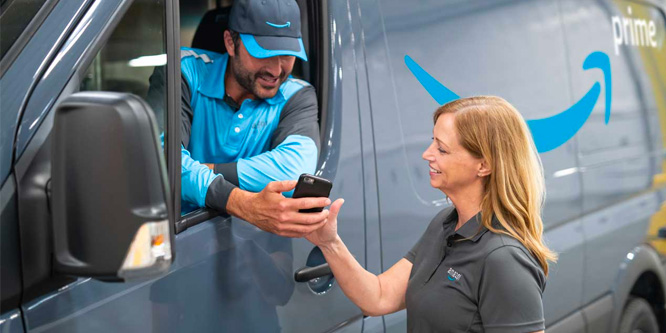 Forget drones for home deliveries of online orders. That was the consensus of a variety of industry experts I spoke with at the recent NRF Big Show in New York. Many however do see opportunities for direct-to-consumer sellers to use alternative service options outside of FedEx and UPS, as well as technologies such as autonomous vehicles and delivery robots to conquer the challenges of the last mile.

A few, not surprisingly, said to look to Amazon.com as the leading indicator for where the industry is headed. A couple of breaking stories in recent days may provide some insight.

The e-tail giant, according to a Wall Street Journal report, is trying to undercut FedEx and UPS in an attempt to attract more third-party sellers to its Amazon Shipping service. Specifically, Amazon is offering to pick up orders from merchants’ warehouses and deliver them directly to the homes of consumers without tacking on additional fees for peak periods during the holidays or on weekends. Nor will Amazon add fuel surcharges to protect margins as FedEx and UPS do.

John Haber, CEO of Spend Management Experts, said fees tacked on by the two parcel delivery services can add up to 30 percent more to shipping costs.

Last summer, Amazon introduced its Delivery Service Partner program, which recruits entrepreneurs to start and run their own companies to deliver orders placed on its site. At the time, Amazon claimed that owners, who it would help with financing, technology and training, could earn up to $300,000 in annual profit operating a fleet of up to 40 delivery vehicles.

In other Amazon news, the company announced that it is running a pilot to test the use of autonomous sidewalk robot technology for making deliveries to customers’ homes. The test in a neighborhood in Snohomish County, WA will start with six Amazon Scout robots. The devices, which are about the size of a small cooler, will be used to complete deliveries to customers in the test area.

Initially, Amazon plans to have employees walk with the robots to make deliveries during weekday daylight hours. Amazon, which developed the technology in-house, said the robots have been designed to safely and efficiently navigate around pets, pedestrians and anything else in their path.

Amazon, in some ways, is late to this game. The e-tailer’s pilot joins a growing list of retailers and restaurants testing sidewalk robots for making deliveries in neighborhoods, on college campuses and other locations.

DISCUSSION QUESTIONS: How do you see the battle between Amazon and the major carriers for last mile deliveries shaking out over the next several years? Which of the autonomous technology now being tested is most likely to succeed?

Please practice The RetailWire Golden Rule when submitting your comments.
Braintrust
"The thing with Amazon is, they’re not afraid to throw a bunch of crazy ideas at the wall to see which ones might stick. "

"Arguably one of the most consistent areas of backlash Amazon faces from its consumers is in fulfillment. "

"Simple. Amazon “buys” the USPS and then innovates mail delivery in an efficient way, acquiring the last-mile delivery capability for its packages as well of course."

Cutting out the middle-man is likely to save money and give Amazon more flexibility over schedules and delivery options. However, this benefit will only accrue over time. As much as it makes sense to do this in urban areas, it is unlikely that Amazon will make a move on trying to service the American hinterland. Order densities and volumes, along with long travel times between deliveries, in many parts of the country do not justify such an investment. Amazon may find technical solutions to this – such as self-driving vehicles – but this remains some way off. The danger for the traditional delivery firms is twofold. Firstly, they are likely to lose business from Amazon; this will be slow at first but will accelerate as Amazon rolls out more of its own delivery services. Secondly, if Amazon starts offering delivery to businesses, it will likely do this at a reduced rate. This leaves delivery firms with the unattractive prospect of losing share in their most lucrative and profitable markets, while at the same time having… Read more »
7
|
0
-   Share

I am not sure why there is a battle and why there has to be a winner, other than the consumer. Major carriers are in business to make sure that shippers can satisfy their customers (intended recipients). Amazon – I thought – is in business as a shipper. As such they will use commercially available carriers and may, through their vast R&D, come up with innovative methods of delivering. Some of these methods may be emulated by other shippers (Amazon’s true competitors) and other carriers. Did I miss a battle?

This is more than a cost-savings or profit enhancing strategy. This is to control the experience. In addition to the 20,000 vans that Amazon has ordered, they also have contracted for 50 cargo planes as they build out their hubs in three airports strategically located (near Fort Worth, Cincinnati and Chicago). Years ago Jeff Bezos said Amazon shouldn’t have customer service issues, but once the package left the warehouse, there was no control over the experience. The investment that Amazon is making in logistics, which includes planes, vans, drones, sidewalk robots and more is about keeping control of the experience they provide their customers as much, if not even more, than trying to find a less expensive solution.

The thing with Amazon is, they’re not afraid to throw a bunch of crazy ideas at the wall to see which ones might stick. When everyone else demands a 50-page business case and three-level deep ROI analysis, Amazon is busy trying all kinds of things, learning from those and iterating multiple times – before anyone else gets one new idea off the ground.

So when it comes down to it, I don’t think it matters what Amazon tries or which ideas succeed. I think the prototypes and tests that are rolling on the streets today will look nothing like the ultimate answers to last-mile fulfillment (I’m betting on Star Trek replicators myself!). But no one will get to that end result unless they take the first step, and Amazon and a few startups are really the only ones out there trying anything, and for that, they deserve the leg up they will undoubtedly get.

In my experience as a Prime member for many years, delivery of Amazon orders from UPS is the most reliable. The Amazon Prime vans consistently drop at the wrong address and fail to tuck a package out of view. Visible boxes left in front of closed garage doors is a major contributing factor to theft, especially when a walk to the porch is shorter. To me, it signals a real lack of interest in solving the critical last-mile issue. there’s no way to track down who owns the Prime van franchise!

Simple. Amazon “buys” the USPS and then innovates mail delivery in an efficient way, acquiring the last-mile delivery capability for its packages as well of course.

Sounds like a great idea, but will they pick up the huge legacy costs for the retirees? That alone is enough to give anyone pause, as the pension plan keeps the USPS in the red, with no end in sight.

As I have noted many times on RetailWire, Amazon’s mission is to satisfy consumer need/wants better than anyone else. That means Amazon has to do two things increasingly better than anyone else to continue to grow their share of spending: Amazon must be closest to the consumer at the moment an item is needed or wanted, sometimes even before the consumer is aware of the need (think of the evolution of the “1 click” to “subscribe and save” to “voice ordering”). Amazon must satisfy that consumer’s need faster than anyone else. This happens when the item is in the consumer’s hand and, in the case of many categories, assembled and usable (which is why Amazon is also contracting entrepreneurs for furniture and electronics installation and assembly, not just delivery). Reducing and removing friction in the demand satisfaction cycle is all Amazon cares about, it is the whole of their work — whether that friction is a minimum order size or item requirement, the order process itself (from “1-Click” to “Subscription”) or the limitations of their… Read more »
3
|
0
-   Share

I don’t like the word “undercut.” “Undercut” implies cost and the delivery is all about cost. It is about efficiency throughout the supply chain. If you improve the last mile what are the possible improvements you can make prior? You may save money, yes. But you may also save time. You may also handle inventory more efficiently.

In the next several years, many alternatives will be tried and introduced. But the delivery needs are so varied that many will be adopted for specific geographic, population and customer needs.

Arguably one of the most consistent areas of backlash Amazon faces from its consumers is in fulfillment. Amazon’s aggressive investment strategy in logistics is an effort to provide a solution to the consumer rather than take on UPS and FedEx directly. In the coming years, as Amazon’s own delivery experiences are honed and it can offer a cheaper, faster and more reliable service, why would consumers opt for other routes?

I think the title says it all: multi-pronged approach. And that’s exactly the right approach to take from a retailer standpoint. There’s such a variety of terrain, product sizes and consumer preferences there’s undoubtedly going to be a number of successful autonomous delivery methods. Given the investment and interest in the space, the consumer is sure to be the winner in this game.

Amazon has not hidden its intention of vertically integrating into shipping services. The have already invested massively in delivery vehicles and airplanes, as Shep Hyken mentioned, and I wouldn’t be surprised if they acquire a large shipping company. Relying on a lot of third-party delivery services is risky, as Amazon loses control over the quality of services.

I wonder whether the “Amazon Scout” can solve the problem associated with people not being home. There is still an element of friction when a customer has to balance between when they are home and when the delivery will take place.

They’ll build out companies like Web to Door (SPRV) to do their last mile delivery.

Braintrust
"The thing with Amazon is, they’re not afraid to throw a bunch of crazy ideas at the wall to see which ones might stick. "

"Arguably one of the most consistent areas of backlash Amazon faces from its consumers is in fulfillment. "

"Simple. Amazon “buys” the USPS and then innovates mail delivery in an efficient way, acquiring the last-mile delivery capability for its packages as well of course."