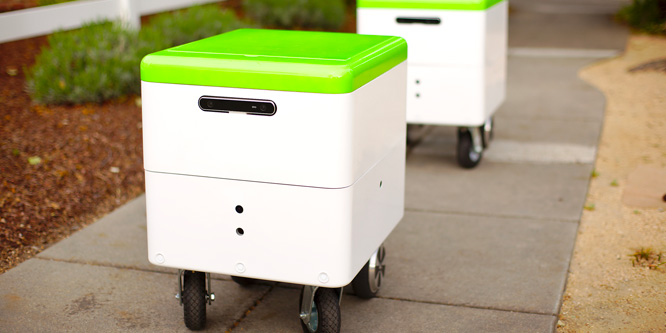 There is nowhere the pizza guy is more popular than on college campuses. But he may be getting a run for his money from a delivery robot stocked with healthy snacks that will be rolling around the grounds of one private university.

At the University of Pacific in Stockton, CA, PepsiCo, in partnership with Bay Area-based robotics startup Robby Technologies, has rolled out an autonomous delivery robot known as the “snackbot,” according to USA Today. Students using the snackbot app can order snacks for delivery to one of 50 locations around the campus. The snacks available are all part of PepsiCo’s better-for-you snack portfolio, Hello Goodness. By PepsiCo’s account, it is the first brand-developed delivery robot currently active in the U.S.

While the brand/startup relationship between PepsiCo and Robby Technologies may be unique, many tech startups have been getting serious about robot-based delivery for the last few years. Since 2017, there has been a spate of news on autonomous or semi-autonomous delivery robots hitting city streets in the U.S. and abroad.

Some municipalities have been friendly to innovation in the autonomous delivery vehicles space. Others, like San Francisco, have expressed concerns about the potential complications and dangers of robot-clogged sidewalks and have taken steps accordingly.

In December of 2017, the city began discussing limitations to restrict robot tests to industrial zones. But by March the city began easing up the restrictions, favoring a pay-for-permit based model and allowing tests on specific city streets, according to Curbed.

University campuses, though, could be an environment where autonomous delivery robots can roll around with a smaller chance of causing an incident than on a crowded city street.

Regulation from individual municipalities hasn’t stopped some big players in delivery and other areas of technology from continuing work on robotic innovations.

For instance, Postmates announced the rollout of its cute, cartoonishly-designed autonomous delivery robot called Serve, according to Digital Trends. Serve moves at walking speed, is enabled with a touchscreen and should be in operation in 2019.

And Segway Robotics, famous for its personal transport scooter, recently announced the creation of its Loomo Delivery robot, an autonomous vehicle with three shelves meant for carrying take-out orders, parcels and the like.

DISCUSSION QUESTIONS: Do you expect robot deliveries to become popular on college campuses? Do you expect to CPG companies such as PepsiCo to become active in trying to lock down this market or will it primarily be retailers that fill the niche?

Please practice The RetailWire Golden Rule when submitting your comments.
Braintrust
"The best type of organization to do this is the one who comes up with the best solution for the market…these are still very early days."

"Sure, robot delivery isn’t about practicality yet, but what college student wouldn’t want a ‘grammable tech experience along with their egg rolls?"

"If anywhere – college campuses are a great place to start. Students have disposable time, energy, and the excitement to experiment with new apps and processes. "

14 Comments on "Will PepsiCo’s robots replace the pizza delivery guy on college campuses?"

I wonder what the loss or vandalism rate on these campus robots are – I’d bet pretty high. Autonomous is a broader societal trend and as such, it’s not surprising that CPGs, retailers and many other organizations/industries are experimenting with this technology. I doubt that this is an either/or proposition between CPGs and retailers – the best type of organization to do this is the one who comes up with the best solution for the market…these are still very early days.

The problem I see with all the robotic delivery systems developed today is that yes, it’s cute and exciting at first but it puts much onus on the customer, so I don’t know how this will be received long-term by customers. The subliminal message here is “customers we care so little about you and only want your money; we’ve even gotten rid of the driver who used to deliver our products with a smile.” I see customers after a while getting turned off by this. As for PepsiCo and college campuses, it’s true that they offer a niche opportunity that is less crowded and easier to manage, so it’s hard to say how successful they’ll be. There is also the issue of theft and vandalism to the devices which I can see unfortunately happening for kicks. So there is a lot to consider. What’s sad is in the end, how much are these companies really saving on drivers? The insurance for robotic vehicles is probably higher than human-driven cars and if you do frustrate the… Read more »
1
|
-1
-   Share

If anywhere – college campuses are a great place to start. Students have disposable time, energy, and the excitement to experiment with new apps and processes. The only downside is that students are also quite mischievous. A group of engineers (I am one) might find it interesting to test the upside-down capabilities of the robot — for example. That probably won’t work out very well for the double-cheese pizza. Key message: expect some hiccups.

I think it is still too nascent and too untested for a large corporation to try to take over this market. There is still too much risk here. However, it is primed for smaller players to run trials, find the niches that work, then start to grow and cross the chasm into mainstream acceptance. It will be exciting to watch!

As Mark noted, vandalism and loss are likely to be high; if not of the robots themselves then the snacks contained within. As such, I wonder how much of this is a serious test case rather than an effort to align the brand with tech innovation.

College campuses are an easier environment in which to deploy this technology than downtown urban areas. College populations are receptive to this type of innovation and technology. It has to work.

Will robot deliveries be popular on campuses? I expect there will be a great deal of hype initially surrounding the concept then reality will set in. That reality will include all the issues mentioned by other who have already commented. Other issues that were not mentioned are weather- and campus size-related. The technology would seem more suited to areas that don’t get snow and where the campuses are reasonably compact.

If the issues are worked out, then I would expect companies such as Aramark that run the c-stores on campus to handle the robot deliveries. They are already there and have an infrastructure to source and stock the products, plus they also operate the dining services.

Any robot delivery will attract attention from the get-go simply because people want to check it out. What does it all come down to? The food, price and convenience. If the kids don’t want healthy food then regardless of how it’s delivered, it will not be a hit. And that’s my 2 cents.

I am not sure that this particular alternative will take the day, but autonomous delivery is the future. It is being tested in several markets by both retailers and third-party providers. Though there has been some bizarre push back.

I believe that the opening for autonomous automobiles will be autonomous delivery systems. Once people get comfortable with the ability of these cars to navigate safely, they will be better equipped to understand how a car can do it.

Colleges campuses are an ideal environment to test and perfect delivery robots. The reduced traffic issues and tech savvy consumers (students) that will enjoy the entertainment of having their snacks delivered by robots will help make it more successful. There will surely be some challenges, as noted by others above (mischievous students and theft), but it is still probably the best environment for research and development testing.

As consumers get accustomed to ordering products from robot delivery services and the systems get perfected, both CPG and retailers will expand the use of these services. However, it will likely be a long time before we see delivery robots as a ubiquitous delivery method.

Autonomous everything is the way of the future. Well, maybe not everything but, in the area of delivery, it is a natural progression of technical capabilities. The key for any company that chooses to go humanless (Is that such a word?) with any aspect of their business will be to understand how to balance technology with human-to-human interaction. The risk to any brand that takes the human factor out is losing a personal connection. It reduces the brand’s offerings to a commodity. Brands will have to find ways to use technology and still create brand loyalty.

Right now robot delivery services are still a novelty. As such, being one of the first to implement puts companies on the cutting edge and can generate interest on college campuses—where students don’t want to lay down their (parents’) hard-earned dollar without good reason. What a cool way to begin forming life-long relationships with future professionals about to enter the workforce?

Sure, robot delivery isn’t about practicality yet, but what college student wouldn’t want a ‘grammable tech experience along with their egg rolls?

College campuses and other semi-private communities (company campuses, etc.) are a great place for robot deliveries to cut their teeth. Understanding usage and the broader interactions with humans in environments like these will give insights into how they might be used in more general public spaces. Every retailer and brand should be experimenting in this area — with most all emerging tech, companies have to start early or they’ll be left behind.

I encountered one of these delivery robots a few weeks ago — not Pepsi, but similar to the picture here — and from that encounter I have a number of observations. They’re cute, but:

So in conclusion, I think we’ll see a lot of these, but I won’t bet on them sticking around long.

No. Where is the increased customer service and customer presence using a robot? Not on college campuses, so why test there? This is especially sensitive where markets have less-mature audiences (read college campuses) compared to professional buildings. The place to start with this service is in large corporate buildings on corporate campuses (Apple, Cisco, Dell, Starbucks, etc.). Also, why are the foods being limited to healthy vs. non-healthy foods? Offerings should reflect the foods which reflect local demand and can offer the rapid turns that this model requires.

Braintrust
"The best type of organization to do this is the one who comes up with the best solution for the market…these are still very early days."

"Sure, robot delivery isn’t about practicality yet, but what college student wouldn’t want a ‘grammable tech experience along with their egg rolls?"

"If anywhere – college campuses are a great place to start. Students have disposable time, energy, and the excitement to experiment with new apps and processes. "