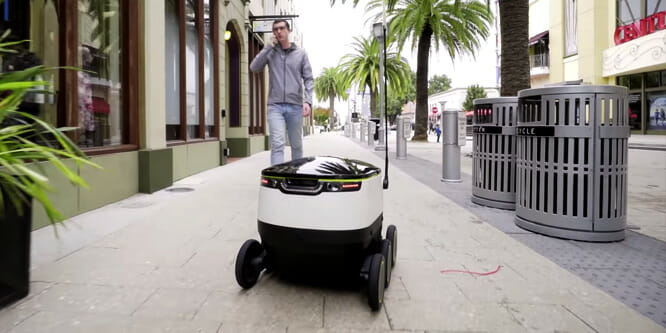 It’s not difficult to imagine a near future in which knee-high autonomous robots zipping around cities to deliver packages will be a common sight. But as wheeled delivery drone tests have become more common in San Francisco, the city has grown concerned about robots clogging up the sidewalks.

The San Francisco Board of Supervisors voted to enact rules that place strict limits on robot delivery startups, according to the San Francisco Chronicle. Advocates have expressed concerns that children or elderly pedestrians may be struck by the robots.

In the current iteration of the rule, delivery startups may only have three robots a piece, and the city will only allow nine robots total. Robots are also confined to industrial areas, require a human monitor at all times and cannot exceed a speed of three mph. An earlier proposed version of the regulation would have banned the robots entirely.

The rule has proven controversial, with tech startups and robotics advocates concerned that the limitations will stifle the development of important new technology.

Self-driving cars have faced similar scrutiny amid the enthusiastic push to refine the technology for delivery. Uber, for instance, has been working hard at leveraging fully autonomous vehicles, most recently striking a deal to buy 24,000 self-driving Volvos as soon as the technology is ready for production according to The New York Times.

But as recently as this month, federal legislators have been going back and forth on guidelines over autonomous vehicles because of, among other things, potential safety concerns, The Hill reported.

There has been an analogous legal back-and-forth over airborne drones as well. A recent FAA measure would require a carrier certificate for delivery drones, just one major hurdle to airborne delivery drone legality in the U.S., according to Bloomberg. The majority of drone flight testing is occurring in the U.K., where there are fewer restrictions.

DISCUSSION QUESTIONS: Will autonomous delivery drones become a regular sight on sidewalks nationwide, San Francisco’s regulations notwithstanding, within the next decade? How do you see the controversy over drone delivery — on sidewalks, streets and in the air — being resolved in the U.S.?

Please practice The RetailWire Golden Rule when submitting your comments.
Braintrust
"The balance between public safety and encouraging development is delicate."

"I think it is past time that we try to regulate these technologies on a one-off basis."

"Using a street or sidewalk free of charge seems to require legislation if we want the quality of our cities to improve and not devolve..."

13 Comments on "San Francisco limits robots on its sidewalks"

It seems inevitable that some form of autonomous delivery will happen, however I doubt that it will occur within the next decade. The balance between public safety and encouraging development is delicate. Public safety should always take priority over development and it’s not hard to image the potential issues autonomous delivery systems on public sidewalks could cause. I suspect that the controversy on drones in all forms will evolve slowly as legislators grapple with the multitude of issues these systems create.

I saw a delivery robot in San Francisco last year, and pedestrians gave it a wide berth. I can’t imagine one on the streets of midtown Manhattan, with hundreds of people on the sidewalk of any given block. It’s going to take a while to figure out how these devices will fit in and where they’ll make the most sense.

Completely agree, Cathy. This is going to happen, and it’ll be interesting to watch our various adaptations as it does.

We are treading dangerous waters with autonomous delivery drones. The sidewalks and the skies can become dangerously overcrowded if numbers and speed (and even time of day) are not regulated. This is going to be a politically-divisive argument. I know where my vote will be; go San Francisco!

Originally deliveries were made by one person, with one vehicle, to one location. Then there was the realization about group deliveries by one person and in one vehicle for the purpose of cost effectiveness. I don’t see why the same approach would not happen with autonomous vehicles — one vehicle, multiple drop-offs with nobody present. Assuming all the health and safety matters are resolved.

Just to give this some context, after a quick online search, apparently Amazon alone, in 2016 on Cyber Monday, shipped over 200 million items! Imagine the cost of all those autonomous vehicles and then the swarm of them heading down a street near you, I cannot see it happening or being allowed.

The model would look more like a UPS or FedEx truck today — one (presumably self-driving) delivery truck driving from stop to stop with one or two package-handling drones to unload and deliver at each stop. To your point, use the best vehicle with the most consolidation along the shortest route.

Look at what Amazon has brought to major cities every day with an explosion of delivery vans and what Uber and Lyft have brought with ride-sharing services. City streets were never designed for these and sidewalks weren’t either. Using a street or sidewalk free of charge seems to require legislation if we want the quality of our cities to improve and not devolve into a Blade Runner-esque world.

It seems inevitable that we will see more and more drone and robotics technology via automated services, such as cars and delivery vehicles. While I can envision this happening in cities and suburbs across the nation, it’s hard to predict how people will react to them in person.

In already crowed city sidewalks and streets, such as midtown Manhattan, it seems quite difficult to expect these drones to work flawlessly and not cause major disruptions. It will require careful cooperation between the tech startups driving these concepts, major tech companies who want to buy and use the technology and governments concerned with protecting citizens.

There are no easy answers and caution seems to be the right move for now.

I think it is past time that we try to regulate these technologies on a one-off basis. If autonomous technologies — whether in the form of drones, vehicles, robots or whatever — are going to be part of the installed urban and suburban landscape of the future, we need to have a more inclusive, integrated and comprehensive approach to how we think and manage them. The problems with robots for example is that — to reduce problems — they need to be taller, and therefore more visible and move at the speed of pedestrians. If you can’t solve for visibility and speed, we shouldn’t have them at all. Or maybe we need to start building streets with automaton paths in the same way we accommodate cyclists. Whatever the right answer is, it won’t be found in dealing with each of these innovations in isolation. Taking a more comprehensive view — from an urban planning perspective — also might help engineers and designers build machines that can better adapt to human interactions.

Those entities that own the autonomous delivery vehicles will manage them so as to not interfere with society. This will not be a problem in the foreseeable future in any city. And if and when it does become a problem, sensible remediation will take place as it always does.

While they may be able to handle a limited number of people and other delivery vehicles, when the sidewalks become crowded, who has the right of way? The delivery vehicle whose owner promised that meal or item would be there by X or the human beings? I think my vote is clear.

Quite simply, we have no idea what’s going to happen. Sometimes a new technology e.g. “cars” catches on, and sometimes something like personal helicopters just don’t. The reasons for each are often though not always clear in the long-run, but less so initially.

As for drones specifically, I would say at the moment it’s 99% hype with little practical/cost-effective application … and that’s even before self-defeating ideas like human-monitors. That may change in the long-term, but not at the pace enthusiasts are predicting.

Braintrust
"The balance between public safety and encouraging development is delicate."

"I think it is past time that we try to regulate these technologies on a one-off basis."

"Using a street or sidewalk free of charge seems to require legislation if we want the quality of our cities to improve and not devolve..."