Amazon takes the next step in CPG auto-replenishment 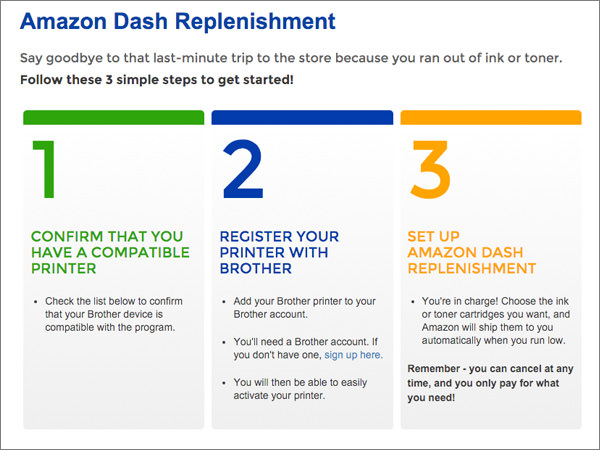 Since the debut of the Dash button, it’s been clear that Amazon is trying to find ways to make itself a necessary channel between wired consumers and CPG brands. Recently, however, Amazon may have found the way to pull customers into its replenishment ecosystem without requiring that they press a button. Some companies are rolling out connected devices that auto-replenish their necessary CPG components through Amazon when a customer runs out.

Buttonless replenishment built into IoT devices may be a better bet for Amazon than the Dash button. Though Amazon has revealed no official numbers on consumer adoption, response to Dash buttons in the media have been mixed. Called a “gimmick” by outlets such as VentureBeat, a main criticism is that the buttons lock the customer into buying one brand. In the case of automated ordering for water filters, customers may be less concerned about brand and may be more content to have the ordering take place in the background.

Automation by device and by button are not the only two modes of CPG replenishment that Amazon has been exploring. A study by 1010data found that Amazon’s Subscribe and Save program, which allows users to set up regular recurring orders of CPG products, drove CPG e-commerce growth by more than 20 percent in 2015.

Other CPG manufacturers have been getting involved with Amazon to varying degrees to take advantage of the e-tailer’s growing presence in smart homes. In October 2015, for instance, Campbell created an Amazon Echo “skill” (the term for functions on Amazon Echo) that allows users to automatically receive recipes that include Campbell Soup as an ingredient, according to Ad Age. At the AWS re:Invent conference, Campbell showed off a version of the Echo featuring the company branding.

Please practice The RetailWire Golden Rule when submitting your comments.
Braintrust
"For those that are Prime addicts, it’s definitely a convenience to have Dash buttons or self ordering devices, but others just might see it as an overreach. There is the issue of being locked in to one brand and not being in the loop for price increases."

"Eventually we need a standard "IoT replenishment message" that allows consumers to configure their preferred retailer and brand. But until then, Amazon will continue to own this space."

This concept is really interesting and sounds great on paper, but I think it’s going to be a mixed bag. For those that are Prime addicts, it’s definitely a convenience to have Dash buttons or self ordering devices, but others just might see it as an overreach. There is the issue of being locked in to one brand and not being in the loop for price increases.

Echo adds convenience and a better level of control for very little effort, so my bet is it’s a more of a long-term win. I pity the brick-and-mortar retailers on the sidelines watching this unfold with their jaws hanging open.

The downside is that once one brand has been selected there’s no penetrating the firewall whether it’s through Amazon or an IoT device. It could revolutionize detergent aisles in grocery stores as POP and coupons become unable to influence trial.

The more Amazon can connect directly to consumers, the more products it will sell. Enabling auto-ordering through the Internet of Things is the next logical step in this evolving process. CPG manufacturers like it because the orders are brand-specific. Amazon likes it because it gets the sale. Presumably both the CPG company and Amazon gather data on each sale. For the consumer, it’s one less thing to think and/or worry about. The products just arrive.

The downside for consumers is that they lose the ability to compare prices or change brands — something they might be willing to sacrifice for convenience.

The downside for new brands is that they will find it harder to successfully break into the marketplace.

The Dash Replenishment Service and Echo, like Subscribe & Save before them, are creating recursive moments of truth — individual decision points that lock households into a specific retailer, category, brand or SKU.

Amazon has first-mover advantage here, but as other retailers follow the stakes of competition will be raised from items and baskets to subscriptions and replenishment systems.

While the concept of automated replenishment is not new, connected devices make the potential more interesting.

We are early in the IoT-driven automated replenishment model. Such a model feeds into the evolving definition of convenience and frictionless commerce. As long as it delivers on those terms, adoption will accelerate. Process or technology glitches that manifest into overstock or out-of-stock situations at home will derail that momentum. As will any price increases that are not perceived as commensurate with the new value equation.

Amazon’s efforts here will help make the automated replenishment model mainstream. Maybe not today, but sooner than you expect, and it will boost supply chain efficiencies from manufacturer to pantry.

Smart devices are going to become more ubiquitous, period. Those featuring automated ordering will, commensurately, become more prevalent where feasible. The challenge will be to enable the consumer to adjust or override the automation factor. Amazon will definitely benefit from this emerging technology as it will become the easiest place from which to procure these types of items. Let us remember that customer service also includes ease of use and convenience. If it’s easy to use and it makes their life easier, they will buy it from Amazon. It’s not just about being hugged every time you walk into a store.

Smarter devices to simply alert consumers (and continue to alerting them), rather than automatic ordering (and forcing consumers to only take one brand) is a superior solution to enhanced replenishment. Replenishment doesn’t have to be automatic if the device simply alerts the user, regularly, prior to needing the material replenished.

I use Amazon to automatically replenish my fridge water filter. It works well but it is every six months, so even if I know I am paying a premium, it is okay. However, the issue I see for things like printers with high volume of replenishment is that consumers don’t want to feel like they are locked into a price set by the manufacturer. I don’t get a sense of how consumers feel about auto replenishment helping them versus the CPG sales.

This is definitely the wave of the future, and Amazon is on its way to locking out all other retailers. Eventually we need a standard “IoT replenishment message” that allows consumers to configure their preferred retailer and brand. But until then, Amazon will continue to own this space.

Yes, I think this is the future. I bet 80 percent or more of CPG product purchases are triggered by the need for replenishment. Consumers would love to become unburdened regarding shopping for paper products, coffee, laundry detergent, pet food, etc. because they ran out. Marketers will embrace it because it builds brand repeat rates and shortens purchase cycles.

This is the future, and the future is NOW! I love what Amazon is doing. The Dash button simplified the ordering process. Just push it and the merchandise shows up. Now you don’t even have to do that. Someone once referred to this type of technology causing the “Lazy Economy.” I guess you can be lazy, but I think it just frees our minds up to do something else — like read a book (that you bought from Amazon).

If you want to think like Amazon, think 10 years out. What will we have? I believe there will be little or no self-ordering of products that are used regularly. Food and various staples will be ordered from smart-refrigerators and smart-shelves. Laundry will be done automatically when it is needed (including folding). Let you mind expand to everything in your household.

Then back up and see how to get there in the interim. That is Amazon! And yes, all will be automated and whoever is the access point will win.

This is just so right on … but if you’re a mass merchant, this has got to scare the hell out of you. From a consumer point of view, or if you just have empathy to this whole thing — how great is this? Just auto-ship me the goods I use all the time and don’t make me shop for something I HATE shopping for (all studies indicate that no one likes shopping the center of the grocery store, especially young people).

This does remind me though of how long it’s taking for the center of the bell curve consumer to come around to online shopping. It may take a while, but once you get used to the convenience and ease, you won’t be going back.

Amazon may be taking the first step but perhaps it won’t be long before we see a new network service called the automatic-order router (a-oR). This a-oR can be based on industry standard RESTful APIs that will enable retailers and solutions providers to resolve the plumbing issues of auto-orders. The hubs that handle the orders and the connections to the supply chain might even add value for consumers by aggregating auto-orders and bidding out for the best price. Suppliers could subscribe to the a-oR. Remember QRS (Quick Response Services) this can be DRS — Demand Response Services. The various trade associations can take the lead along with enterprise solution providers to create auto order standards at the device level (appliances, etc.) or consumer goods. I can see setting my retailer or DRS provider as part of the installation of an appliance or when I can get a product I purchased from a retailer. An enterprise company like SAP can add more value by creating auto-order supply chain optimizations and routing to service providers. Demand Side Automation —… Read more »
0
|
0
-   Share

Braintrust
"For those that are Prime addicts, it’s definitely a convenience to have Dash buttons or self ordering devices, but others just might see it as an overreach. There is the issue of being locked in to one brand and not being in the loop for price increases."

"Eventually we need a standard "IoT replenishment message" that allows consumers to configure their preferred retailer and brand. But until then, Amazon will continue to own this space."