Are Americans ready ‘to get back to back to the sport’ of Christmas shopping in stores? 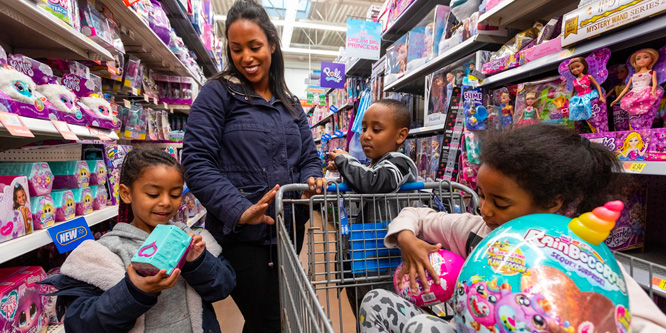 New research shows that Americans are shifting more of their Christmas shopping to stores this year rather than placing orders online.

Eighty percent of consumers plan to shop online this year, down from 85 percent last year, marking the biggest shift to stores since the pandemic began, according to The NPD Group’s annual holiday purchase intentions survey.

NPD also reports that 2022 will be the first year  that consumers expect to make more of their holiday purchases in stores (46 percent) rather than online (45 percent). The research firm said this finding was supported by September in-store purchase receipts, which grew one percent year-over-year, while online sales were flat.

“After more than two years of heavy online shopping, consumers are ready to get back to the sport of shopping,” Marshal Cohen, chief retail industry advisor for NPD, said in a statement.

Fewer than 75 percent of consumers say they are planning to shop pure play e-tailers this year, down from 79 percent in 2021. There may be a continuing shift to omnichannel retailers with 16 percent planning to pick up orders from stores compared to 14 percent last year.

NPD expects mass merchandisers to be big winners this holiday season as consumers look to stretch their dollars during a period of high inflation. Forty-four percent plan to shop for the holidays at mass merchants, up from 42 percent in 2021.

“Impulse and self-gifting are an integral part of the holiday mix; without them, it is hard to achieve growth,” Mr. Cohen said. “Success this season depends on the ability of retailers to leverage promotions and exciting products that play to feelings of shopping cheer. Increasing in-store shopping levels will deliver greater benefits to retailers that can entice consumers into buying on impulse.”

Research from SlickDeals published in May points to the role that impulse decision-making plays in retail sales.

Sixty-four percent of Americans told SlickDeals that they have increased their impulse buying in 2022. The average person spends $314 a month on items whose purchase was not pre-planned, according to the study. Fifty-two percent said they are making impulse purchases equally online and in-stores.

DISCUSSION QUESTIONS: Do you expect to see a significant shift back to shopping in stores over the balance of the Christmas shopping season? How can retailers promote impulse purchases in stores and through their various pickup services?

Please practice The RetailWire Golden Rule when submitting your comments.
Braintrust
"This year will begin a push back to normalization with stores trying to show how they can give the shopper a better experience than the convenience of online shopping."

12 Comments on "Are Americans ready ‘to get back to back to the sport’ of Christmas shopping in stores?"

All indications are that consumers are heading back to physical stores, but I wouldn’t call it a significant shift. I’d call it an adjustment from the pandemic highs of online. This holiday season, retailers must focus on converting the shoppers that are visiting their stores. Having an understanding of store traffic trends will enable retailers to allocate their labor to the stores with the strongest shopper demand. Retailers should also focus on transaction processing – keep the lines moving fast. Overall, this should be a good holiday season for retailers despite the persistent inflation.

Shoppers are definitely wanting to get back into stores. Simultaneously, they have truly grown accustomed to the ease and convenience of shopping online. At a behavioral level, they are truly conflicted to the point of cognitive dissonance. Brick-and-mortar retailers that can create a shopping experience that satiates both emotional needs could do well!

Shopping is theater and the store is the stage. Going to shop in person for Christmas is part of the fun of the holiday. Between sales in stores, decorations, Santa’s elves, etc., retailers make shopping in stores over Christmas time feel like a movie. With the pandemic winding down, in-store is back in vogue. I see this trend continuing throughout the holidays and beyond. And the idea that more shoppers plan to pick up orders in the store suggests even more impulse shopping this season.

The pandemic left us with all kinds of fatigue. And now online holiday shopping joins that list. In-store holiday shopping can actually be a lot of fun. “Explore + Experiment + Execution = Experience” is my mantra. So if the retailer is executing well, then the explore + experiment opportunities for the shopper are abundant. And the experience for all can be memorable.

Stores are going to be cutting back margins to move product this year incentivizing customers to come back to their stores more than ever. This year will begin a push back to normalization with stores trying to show how they can give the shopper a better experience than the convenience of online shopping.

I think we are at the point where those who enjoy the excitement of holiday crowds, packed stores, full parking lots, and endless lines will be delighted to return to what they love. And those who enjoy the quiet experience of opening a laptop, doing all their shopping from home while sipping a beverage, and watching a game will probably loathe the idea of going back to a store this time of year. I don’t think we will see dramatic shifts in behaviors one way or the other; I think the patterns are more or less established now. This year will look a lot like last year.

I think there will be quite an upswing in footsteps in stores this season. It is like we are going to discover a new freedom and comfort for shopping in retail stores, after a couple of years of COVID-19-induced fear of shopping.

Holiday shoppers have a choice this year to stay home or get out and participate in the game of bargain hunting. The best news is that the choice is back.

Other than due to COVID-19, Americans never left Christmas shopping. Online has proven it is not the adversary it once was thought to be. Who else saw the news: “Amazon Becomes World’s First Public Company to Lose $1 Trillion in Market Value”? I’ve said it all along, don’t bet against brick-and-mortar — it is the hub everything else connects from.

They may complain, but people like shopping in stores. The excitement of shopping during the Christmas season will be welcomed by all. Online shopping will decline slightly as a result.

No one in my family has been to a store during the holidays in 5-6 years. We hated it when had to go, now we have options. For us, shopping at the holidays is a horrible experience that we avoid. And we’re not alone. Just sayin’, “welcomed by all” should be “welcomed by some.”

I expect people to return to the stores after two years of COVID. However, I don’t know if it is a trend or a behavior change. Throw away the last two years, compare expected foot traffic to 2019, and look at the pre-pandemic trends.

I bet in non-inflation dollars, retailers’ revenues will decline.

Braintrust
"This year will begin a push back to normalization with stores trying to show how they can give the shopper a better experience than the convenience of online shopping."