Are Apple’s classes getting in the way? 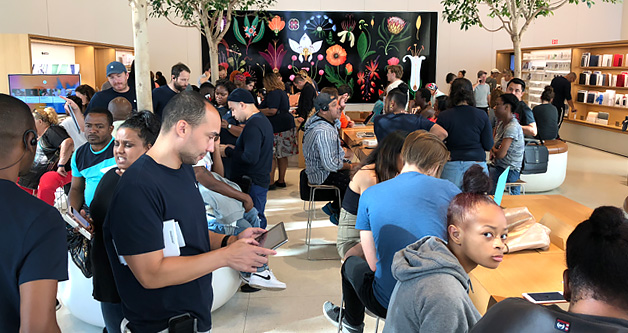 In event planning, too much of a good thing — guests — can have serious repercussions. That’s a problem that the Apple store is running into as customer desire to take advantage of the retailer’s tech classes has outpaced the space in their mostly mall-based locations.

Increased customer awareness and more in-depth class content since the rollout of the “Today at Apple” learning sessions has led to bottlenecks, as described by 9 to 5 Mac columnist Michael Steeber. Customers visiting the store in search of support end up competing for space with people taking the classes, and the chatter necessary for customer problem solving works at cross purposes with the learning environment. The article points to Apple’s more spacious standalone stores as being better able to accommodate both sides of the business (though the Apple store is still largely reliant on mall locations). It also points out a potential path forward in some of the successful learning experiences Apple has held outside of its stores, such as off-site Apple-led training at a museum in Barcelona.

Shifting to learning events at off-site locations, however, could have an impact on store sales.

The “Today at Apple” initiative was launched under the guidance of then-senior vice president of retail Angela Ahrendts as part of a broader initiative to turn Apple’s stores into “town square” environments.

The strategic shift in focus was attributed, at least in part, to flagging device sales. By late in Ms. Ahrendts’ tenure, Apple had reached a point of saturation with its die-hard customers. Furthermore, new devices being released were no longer as revolutionary as those launched the previous decade.  Some products, like last year’s $1000 iPhone X, have also gotten prohibitively expensive.

Ms. Ahrendts’ once celebrated tenure at Apple has recently gotten criticism as some have noted flagging customer service and difficulty purchasing. Ms. Ahrendts, who left the company in April, dismissed her critics in a recent Bloomberg interview and touted “Today at Apple” as one of her great successes.

In January, Apple announced the introduction of 50 new sessions in a press release.

DISCUSSION QUESTIONS: How can Apple mitigate the conflict between shoppers and learners given the limited space within its stores? Do you see hosting classes as off-site locations or creating a separate physical store concept for “Today at Apple” as viable alternatives?

Please practice The RetailWire Golden Rule when submitting your comments.
Braintrust
"When one looks at the many retailers struggling to try to find ways of generating store traffic, one has to agree that Apple’s problem is a nice one to have. "

"Classes sell products! Apple is definitely savvy enough to figure out how to deal with the abundance."

"This is a challenge that will be leap-frogged with technology."

13 Comments on "Are Apple’s classes getting in the way?"

Learning IS shopping. Learning IS the experience. Learning IS engagement in its purest form. Wanting to learn more IS loyalty. Prioritize the learning. Apple will learn how to manage everything else.

Jeff Sward is right. Classes sell products! Apple is definitely savvy enough to figure out how to deal with the abundance.

Agreed — I don’t see a conflict here — they are different sides of the same coin and they reinforce each other. To separate learning would separate the Apple stores from a major component of what makes them special, some of the community aspects. Separately, there’s always opportunity around new formats and learning what else might work (or work better) as retailers.

When one looks at the many retailers struggling to try to find ways of generating store traffic, one has to agree that Apple’s problem is a nice one to have. Yes they have some issues to deal with but, knowing Apple, they are most likely already looking at ways by either changing the scheduling of their classes, limiting attendance, and/or shortening the length of the classes. They may opt to hold more courses off-site, but they lose the impact of other customers seeing the class which might inspire some to sign up as well as those taking the class to after the course go shopping for more Apple product immediately. In an industry that changes rapidly with new ideas and concepts, Apple has been able to maintain a strong presence and massive success, and it is doubtful that it will change any time soon.

This is an issue. The classes were really built around Apple’s newer flagship stores which are configured for interaction and engagement. Some of the traditional mall-based stores are relatively small boxes which do not have the capacity host a lot of classes or big sessions. The solution is relatively simple: Apple needs to flex what it offers and class sizes by location.

Another issue that arises from crowded stores is the difficulty in finding Apple associates to serve. This is partly mitigated by the presence of a greeter or host, but it is becoming an increasing problem with guests uncertain of who to ask to undertake basic tasks like pay for an item. This is another area Apple needs to review.

There’s no shortage of increasing space in the majority of Apple’s mall locations, and Apple could look to leverage adjacent available space when their leases come up for renewal. At any rate, I’m sure in the most affected sites this could create a look at a redesign. All in all this is a good problem to have, and one for retail operations to manage.

This is a challenge that will be leap-frogged with technology. A lot of these classes are already going online as videocasts, live or taped. In the meantime, to satisfy those shoppers with the desire for community that’s offered by the Apple store classes, malls have plenty of space available. Standalone units are typically larger than the mall stores and don’t have the same issues.

As I walked into my Apple store, my first impression was that it was going to be a long and agitating visit to purchase a cable (I had no idea of what I needed). Surprisingly, one of the associates almost immediately acknowledged me. I told him I was surprised given the footprints in the store. He told me he was the on front line made to intercept those who entered. There was a packed house … I was out in 12 minutes. I think Apple is vigilant in watching this and implementing solutions.

The hubris of “we can do what we want and customers will wait” leads me as a longtime Apple user to avoid the stores whenever I can. Be brilliant on the basics. #strategicmiss

Greeters at the door can help steer people to the right areas for shoppers and learners. The challenge is having the right physical space for each group. Apple does a good job of scheduling people into sessions so this problem can be mitigated somewhat by these online appointments. Separate facilities could be used but they may be confusing to the attendee to find and the sales effects of the attendees attending classes in the stores will be lost. The fact that Apple has this challenge supports the idea that the classes are very successful. Apple should keep them going and adjust to the demand as best as possible.

This is a good problem to have – and a bad problem to have. Any company loves when their ideas are successful. But if it’s too much success, it can get in the way of business-as-usual. Such is the case with the overcrowded classes and stores. If it makes sense (financially) to have off-site locations or a separate store concept, then what are we waiting for?! Or consider limiting the number of people in the class and offering an online alternative for the overflow. That overflow can be at a nearby space at the mall with the in-store class being streamed to that location. (Unfortunately, finding empty space at a mall is typically not an issue.) It still gets the “learners” to the mall and the store. At the same time, it doesn’t overcrowd the store and upset other customers.

Arguably, Today at Apple is designed to foster greater brand loyalty than it is to encourage on the spot product sales. That stores are running out of space for the demand generated by these classes is a great problem to have, so long as it is well managed by store staff.

I’ve been in plenty of Apple Stores where the crowd seems excessive — frankly, who hasn’t been in an Apple Store like this? Amazingly, every time I’ve seen this, I’ve been quickly helped by an associate whether I was looking to buy an accessory, or get support for a product. Every time I expect the visit to be a long one, I am pleasantly surprised how quickly I get what I need. Apple seems to have this managed, however, perceptions are important so perhaps this is an opportunity for store remodels and growth to create larger spaces. Something tells me Apple can afford the higher lease costs!

Maybe have dedicated hours for the classes and make sure these hours are advertised? It is a good problem to have, but personally I would be very distracted if I get caught in a situation where there is jostling for space between people who want to purchase and people who are there to learn.

Braintrust
"When one looks at the many retailers struggling to try to find ways of generating store traffic, one has to agree that Apple’s problem is a nice one to have. "

"Classes sell products! Apple is definitely savvy enough to figure out how to deal with the abundance."

"This is a challenge that will be leap-frogged with technology."