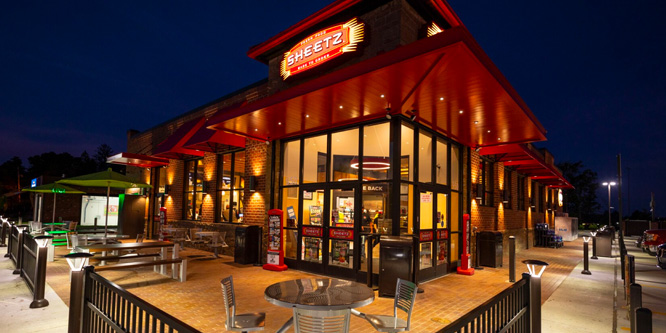 Gier Oil Co. is the family-owned operator of more than 50 Eaglestop convenience store locations in the Missouri area.

The article further detailed a number of other regional gas station/convenience store hybrids echoing similar sentiments. Iowa-based Kum & Go, a 400+-store chain, is finding fuel less relevant and has been developing food offerings meant to be fast-casual quality.  Small gas station/convenience store Neon Marketplace is trying to court the customer who would pick up breakfast at Starbucks. Convenience stores also report experiencing increased food-related traffic during the pandemic. Casey’s for instance, has experienced an unprecedented increase in fresh-made pizza sales.

Since the mid-2010s or slightly earlier, convenience stores have been adding restaurant-like features to their operations in response to shifting consumer demand.

One of the biggest global convenience store chains has gone as far as to launch a test store concept that it has used to determine, among other things, how to best bring restaurants into its stores in new U.S. markets.

In 2021, 7-Eleven had eight of its Evolution concept stores open throughout the U.S., according to Franchise Times. The chain at that time announced its intention to open 150 restaurants that year.

The advent of electric cars may also be causing convenience store operators to anticipate an impending sea change and seek alternate business channels outside of fuel. Even some major convenience store players who do not sell gas appear to be taking steps to embed themselves in the new fueling infrastructure for electric cars.

DISCUSSION QUESTIONS: Do you think it is true that convenience stores are becoming primarily “restaurants that sell gas”? How do you see traditional c-store product offerings changing in the years to come?

Please practice The RetailWire Golden Rule when submitting your comments.
Braintrust
"There is a significant opportunity for convenience stores to change the narrative and become a one-stop shop for customers on the go. "

21 Comments on "Are c-stores mostly becoming ‘restaurants that sell gas’?"

We have worked in this industry for years and have watched the evolution of convenience stores. Customer care has always been a top priority, so has developing food offerings that rival neighboring establishments. “Restaurants that sell gas” is a good way to describe today’s c-stores. Department stores could be next, have you seen the size of some of these stores? Huge!

That would be very European, where many major department stores feature restaurants – often very good ones. Think Harrod’s in London, Ka-De-We in Berlin, Bon Marche in Paris, etc.

Here in the city, Macy’s has several restaurants. Bloomingdales as well. Nordstrom’s restaurant is actually a destination. Saks offers a “Parisian dining experience.”

Macy’s State Street (Marshall Field’s former flagship store) has some good restaurants, but the pickins in the suburbs are slim.

The depachikas in Japan are likewise sublime — can’t wait until we can travel there again. Macy’s shut down all the basement food halls that Dayton’s had installed here in the Twin Cities, grumble grumble. Guess we have to make do with a visit to Kwik Trip.

For most convenience stores, cheaper gas is a tactic to get the people to walk into the store. The profit margins are not in selling gas, but other products. C-stores becoming restaurants that also happen to sell gas is the logical extension.

But I am not so optimistic about c-stores’ ability to execute. For one, restaurants are a different competence. Even in locations where onsite restaurants are operated, food is mediocre at best. Instead of an owned restaurant, perhaps partnering with chain restaurants. If the location is big enough, creating a mini-food court might work better.

Convenience retail will need complete reinvention to remain relevant in the future of electric vehicles. Evolving their food offerings is a logical move, but not if they choose food products that compete with the fast food industry. The meaning of convenience has changed for consumers in today’s world of rapid delivery, working from home and the ability to charge an electric vehicle at home or at any local shopping center. C-stores will need more than just better food options to hold their place in the community. Better to leverage their advantage of location deep within communities to offer partnership to larger national retailers to improve the range of goods and services available to the neighborhood, and act as a pick-up and returns hub for other online and offline retailers.

Which is what chains like Family Mart, 7-Eleven, and Lawson’s have done in Japan, Taiwan, and elsewhere. They’ve truly become the essential one-stop shop for each city block. I’d love to see a deep dive on their logistics operations and how they navigate often very tight roadways and neighborhood delivery windows, while providing exemplary service.

I can see convenience stores selling food with a place to sit and eat, though not with a restaurant layout. But I am told that for every gallon of gas that a customer pumps should bring one dollar in sales inside the store. Can a convenience store make a real restaurant work? Maybe so if in our hurried culture they can be quick, fresh and good. You think the stores will have to upgrade and have kitchens so that the health departments will approve? I think so, if they they plan to call their foodservice area a restaurant. I can see the space challenges of incorporating seating areas as well. There will be challenges, but I am sure someone will come up with some good ideas to make convenience store restaurants speedy and good.

There are premium prepared foods, organic options, and other healthy alternatives to the usual candy and soda offerings. This represents a significant revenue and margin opportunity for convenience stores. The consumers and markets have shifted, and the demand is there for healthier options.

I have worked and consulted with c-store chains for over 20 years. The evolution of these chains has been amazing to watch. “Restaurants that sell gas” is very representative of today’s suburban c-store. Has anyone visited a Buc-ee’s? Based in Texas with stores in Florida, Alabama, Texas and Georgia, it’s a one-of-a-kind experience extravaganza! The average footprint is 50,000+ square feet. When you drive up, you simply can’t believe how big they are. Each store has 100 gas pumps for cars, with gas priced 10-30 cents cheaper than any closest competitor. Inside, the food and gift sections are “ginormous.” The Texas barbecue sandwiches are nothing short of mouth-watering — most delicious sandwiches you’ve ever eaten. Makes you wanna buy a whole lot more. And the line of cars waiting to enter is unbelievable. Who would have thunk a c-store could attract such a following? So, is there upside for c-stores in the future? You bet there is!

Our clients in the c-store space are very definitely focused on innovating and broadening their offerings in food, as fuel sales continue to decline overall. I would challenge the description “restaurants that sell gas,” however, as most c-store brands are taking a multi-pronged approach to their food offerings – from “built to order” at Wawa, to Fresh Food, Fast at Circle K as a couple of examples. These operators understand the need to serve customers quickly, safely and with the freshest, most personalized options possible. The leading brands are aggressively pursuing a model representing the convergence of prepared foods, fast food and fast casual, creating their own distinct category of food service.

I think they are slowly becoming those. However the purpose many of them still serve is to let customers grab a Coke, Snickers, coffee and gas.

Obviously it’s smart for the channel to think about what happens when the next car people purchase is a hybrid or EV. What drives traffic then? Food? It better be great because there are plenty of options, not to mention delivery which expands the options further. In my view, it has to be more than a restaurant/food offer.

At some point we will be over-retailed and the consolidation that panelists mentioned will expand. Similar to what we see on a turnpike. Starbucks, Chipotle, etc. Retailers like EG have a great approach as do Hy-vee, Fast & Fresh, etc. With those retailers, the store doesn’t feel anything like a c-store, it almost feels like a neighborhood hub with beer taps, food, drink, expanded alcohol offering, BOPIS lockers, etc.

I’m curious to see how it plays out and what changes other channels make to adapt.

“The days of smokes and Cokes are coming to an end.” Now it is smokes and Cokes, hot dogs and pizza and anything else that will continue to destroy the healthy diet of America. I have to believe that even McDonald’s is healthier than the convenience store fast food restaurant.

The importance of foodservice for c-stores continues to grow. A good foodservice offer has evolved from a “nice to have” into a “need to win.” There are many chains and independents that already have great foodservice offers. They include companies such as Rutter’s, Sheetz, Wawa, CEFCO and 7-Eleven’s new Evolution locations just to name a few. In these and other chains the foodservice offers rival that of many QSRs. The transition to becoming more “restauranty” will continue.

Convenience stores are well-positioned (figuratively and physically) to emerge go-to retailers across the retail landscape. Properly deployed, they will not only become “restaurants that sell gas” and provide electric car charges, but also a gathering community hub. Cannot wait to see this transformation unfold!

Sorry, but I don’t buy it, and I won’t buy it until some actual numbers are presented, or at least something beyond Mr. Siron’s proclamation(s). Part of my reaction may be due to the fact that very few c-stores here in the Bay Area actually sell gas, so I don’t see the description of current operations (even) being accurate, though I recognize this may not be true nationally. So, while I don’t have difficulty picturing co-branding and hybridization growing, I don’t see it becoming the rule.

Look at Royal Farms on the East Coast. Their fried chicken is legendary, and there are plenty of other delicious reasons to walk in. Smaller, dingier stores can’t compete.

C-stores have the real estate needed to become a preferred destination for consumers. If they capitalize on the trends — EVs, more food away from home — they will be rewarded.

Yes. The old c-store template is now becoming a restaurant that allows for recharging of electric vehicles and hybrid vehicles. Why these? Because the tax incentives alone will cost the operator of this new electric focused c-store nothing to install high speed charging stations. This makes for a captive audience for 20-30 minutes which means tremendous increases in food, drink, and other premium convenience store high-profit items, as well as becoming a location to recharge your phone or computer, buy new electronic accessories, use these (with fast, high-speed, wireless).

Braintrust
"There is a significant opportunity for convenience stores to change the narrative and become a one-stop shop for customers on the go. "