Are feedback requests worth it, even when they’re annoying? 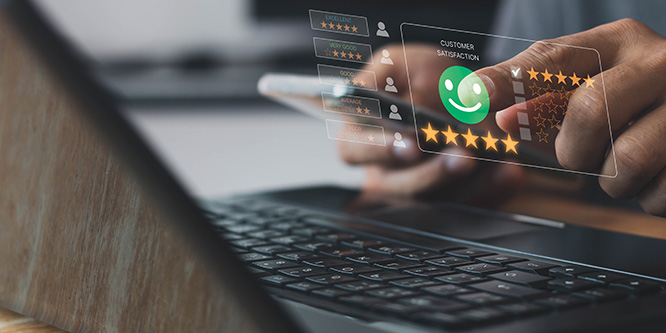 A university study finds requesting feedback from online users can favorably influence their behavior, even when they disregard the requests.

The researchers led by France’s INSEAD said most consumers consult reviews and ratings before purchasing a product or service, but a wide majority don’t leave their own reviews. If prompted to “rate their experience,” most similarly click “No thanks.”

The study explored the question, “If most users do not reply, what is the point in asking them for feedback?”

The researchers collaborated with an international website to explore how feedback requests influenced the likelihood a user would upgrade from a “freemium” model offering a basic, free service to a “premium” model with additional features for a fee.

The study found consumers who declined to rate a website when prompted were significantly more likely to upgrade from free to paid services than those not asked to provide feedback. Moreover, those declining to give feedback were as likely to upgrade as those who left a rating.

Researchers concluded that feedback requests can be a subtle way of signaling that a company cares — even for the non-feedback providers. The researchers wrote in a press release, “Even if the request is automated, consumers are more likely to believe that someone is listening and that the company wants to provide a positive experience.”

The favorable view comes despite numerous articles and studies over the years exploring “feedback fatigue” from requests that brands often make post-purchase.

A New York Times article from 2012 documented how the “onslaught” of online customer satisfaction surveys was driving declining response rates over the last decade.

A Wall Street Journal article from 2020 cited studies suggesting repeated surveys cause customers to delay purchases or make them reluctant to return.

Andrea Godfrey Flynn, a marketing professor at the University of San Diego School of Business, told the Journal, “It’s hard to break the instinct that, like in our interpersonal relationships, the more we can communicate with each other, the better that’s going to be. It’s hard for it to sink in that it can actually drive your customers away.”

DISCUSSION QUESTIONS: Do you find online customer feedback requests to be more positive than negative to the online shopping experience? Do you see enough value in prompting customers for feedback even though most don’t reply and some are annoyed by them?

Please practice The RetailWire Golden Rule when submitting your comments.
Braintrust
"Getting feedback can be a very useful thing -- but for goodness sake be discerning and make it about a meaningful customer experience."

"The research from INSEAD is indeed interesting and likely encouraging to merchants and brands who thrive on customer feedback. But I can see a fine line here."

"I stopped providing feedback when the surveys got longer than two or three questions."

15 Comments on "Are feedback requests worth it, even when they’re annoying?"

Perhaps life is different in France, but I am highly skeptical of this study. Nothing irritates me more than the continual barrage of feedback requests from stores, websites, and service companies. The constant barrage tells me, as a consumer, that the company isn’t really interested in the feedback. There’s a cry wolf effect – by asking so often the feedback becomes meaningless.

Do I find online customer feedback requests more positive than negative for the online shopping experience? For me, they are a huge interruption and annoyance.

Be assured that if I have a negative experience I will comment on it without prompting.

Online product reviews are super helpful in making a decision, especially, if you’re looking for a quality mechanic in a new city or interested in buying a high-end item that is purchased infrequently (think kitchen appliances, jewelry, furniture, vehicles). These reviews can highly influence consumers’ decisions. To this end, every online company ought to seek feedback even though many customers will not provide it, and those that do tend to be on the extremes — either very positive or very negative.

I’m totally with Doug on this issue. No matter how mundane my purchase from Home Depot, for example, I start getting automated feedback requests. “How were the nails you purchased?” I bought those “sliders” for furniture and must have had a dozen requests for feedback – including a picture of what I’d purchased in case I forgot what they looked like. Getting feedback can be a very useful thing — but for goodness sake be discerning and make it about a meaningful customer experience. I’m waiting for the chance to give feedback on the requests for feedback! Oh, and for the record, the sliders did slide.

I stopped providing feedback when the surveys got longer than two or three questions. A classic example is you provide a rating on the scale offered and then there are five questions asking why you gave that rating. Like Gene, if I were unhappy you’d know it.

The research from INSEAD is indeed interesting and likely encouraging to merchants and brands who thrive on customer feedback. But I can see a fine line here. This finding has uncovered an implicit or derived behavior where no response may not actually be bad. That insight could cause some marketers to stray from the original intent of a survey (feedback) and seek an implicit benefit (brand favorability). The potential fallout from that, true feedback fatigue, could, in the end, do more harm than good.

This is certainly something for merchants and brands to keep in their tool kits and leverage strategically. However their marketing practices should continue to be lead by honest intent and brand integrity. If the intent is for feedback, then act with integrity and truly seek feedback; not just perception.

I find them – in the main – to be poorly designed. Many have some form of rating system (usually stars) and a mandatory comment box. My suggestion would be to simply make the comment section optional and anonymous. That would make responding less cumbersome, easier, and should encourage a response while still giving you the data you need and providing “objective” content for existing or potential customers.

The best feedback requests are an extension of a company’s operational and product strategy. They are simply designed so the customer intuitively feels that in 2-3 questions their captured responses will actually be used to improve the next experience.

Asking for feedback about the product when it has just arrived and before I have used the product means that I don’t respond. If I really like or dislike a product or service I will respond. If it just fulfills expectations I will not leave feedback on the forms that require a certain number of words before responding. Answering a lot of questions when I want to say “performed as expected” is not worth it.

I think most experts here agree that they personally find feedback requests annoying. The study itself is interesting in that it concludes that simply offering the opportunity to give feedback improves customers’ propensity to buy or upgrade. This may warrant more digging into. There is always a concern that the segments who take the time to give feedback mat not be representative of the larger group.

The research suggests that by offering a feedback opportunity, consumers have a proclivity to transact or upgrade. Much of the discussion shares our personal experiences of being annoyed by feedback options. It would be interesting to dig deeper and understand if the negative feelings follow end-of-call options, or a follow-up text, which often triggers charges. Perhaps there is a framework for grouping categories that warrant feedback and others that simply annoy shoppers.

Customer feedback is tricky as it always suffers from “survivorship bias.” You get to ask questions about the experience someone had who transacted — and keeping this short and meaningful is tricky.

What you miss out on is those customers who never transacted — you are not able to determine why they chose not to spend their money with you.

The article has some good points but misses many. Some thoughts here:

1) Agree with Kai that post purchase feedback is problematic. After all, accuracy depends on delay from purchasing, and may include customers who had no other choice, and moreover misses those who browse but don’t buy – why not!

3) We think the only valid way to get actionable feedback is at the point of experience. This includes browsers and shoppers, overcomes the accuracy/latency issue, and if done right (i.e. on their terms) with an anonymous option, in less that 1 minute, with a device and input they choose and with appropriate questions.

Braintrust
"Getting feedback can be a very useful thing -- but for goodness sake be discerning and make it about a meaningful customer experience."

"The research from INSEAD is indeed interesting and likely encouraging to merchants and brands who thrive on customer feedback. But I can see a fine line here."

"I stopped providing feedback when the surveys got longer than two or three questions."