Are holiday gifts in the workplace an untapped retail opportunity? 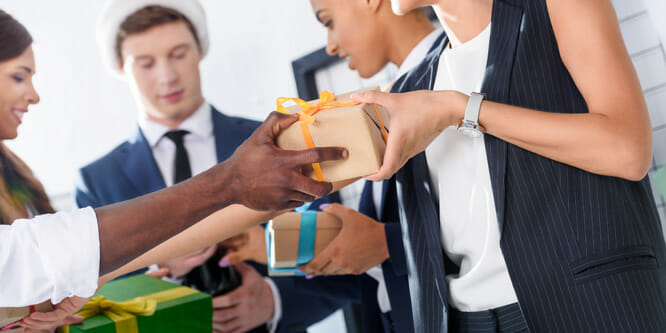 The results were similar to last year’s findings. Of the workers who plan on spending on their co-workers or bosses this holiday season, 34 percent are planning to spend $10 or less on each gift, 59 percent will spend $11 to $50, and six percent will spend $51 and above.

From the other side, 55 percent of employers surveyed are buying gifts for workers this year — up from 46 percent last year and 33 percent in 2008. CareerBuilder credited the increase to the strong economy and solid corporate profits.

The internet is full of advice for giving gifts to co-workers and supervisors, but the practice seems to come with more challenges than buying holiday gifts for friends and family.

Gifts to avoid include alcohol, flowers or perfume that may carry inappropriate innuendo. And an awkward personal gift can hurt the recipient’s feelings in a work setting or even harm the giver’s career.

“We live in friendlier office times where people are more involved in each other’s personal lives,” Lizzie Post, co-author of Emily Post’s Etiquette 19th edition, told Forbes. “We always suggest personal in nature, but appropriate for the office.”

Keeping in line with the expected price range was also a common piece of advice. Monster Career Expert Vicki Salemi told CNBC, “Don’t be extravagant by giving someone a trendy gadget that would be $200 and make the recipient feel uncomfortable.”

In some situations, workers should buy a smaller gift, such as such as a box of chocolates, for everybody in the office to avoid anyone feeling left out.

For bosses, the general advice was to team up on a gift. Karen Thomas, Connecticut-based, etiquette coach, told Moneyish, “Collectively you can all chip in and get something for your boss, but to buy something individually would look like brownnosing.”

DISCUSSION QUESTIONS: In what ways could retailers be more helpful to employees and employers giving holiday gifts? What are the largest pain points in the office gift exchange process?

Please practice The RetailWire Golden Rule when submitting your comments.
Braintrust
"When shoppers are under pressure to get something — having some helpful tips, hints and suggestions can be a saving grace."

"Talk about holiday stress! Nothing like trying to find the “perfect” gift for a co-worker that does not offend and break your budget."

"I agree with several others that curated assortments specifically suited to office exchanges feels like an appropriate way to be helpful."

12 Comments on "Are holiday gifts in the workplace an untapped retail opportunity?"

Retailers should add a holiday season section to their websites. This should include holiday shopper helper guides, where the consumer can click on gift ideas for parents, a boss, coworker, spouse, son or daughter.

When shoppers are under pressure to get something — having some helpful tips, hints and suggestions can be a saving grace.

Talk about holiday stress! Nothing like trying to find the “perfect” gift for a co-worker that does not offend and break your budget. The biggest thing retailers can do is to curate appropriate assortments by age and gender, in some reasonable price ranges.

The season of giving with a difference gets a whole lot easier if retailers get in the spirit of helping to organize opportunities around good causes. It also helps the retailers build their brand on something other than product and price.

Retailers could provide suggestions for workplace giving within appropriate price points for Secret Santa activities, bosses providing gifts for employees and other gifting situations. Currently individuals have to spend time and energy trying to find appropriate gifts within specific price points. Customers would appreciate retailers providing assistance for this activity.

When I used to work in an office the favorite gift was actually scratch tickets. Hard to mess up, an element of risk and an opportunity for reward. Anything else becomes a candidate for the trash heap.

But I have a better idea. In my two companies, I did not permit in-office gifts. If employees wanted to give gifts to friends who they worked with, they had to do it out of the office, but outright gift giving to supervisors or subordinates or colleagues in the office was not permitted.

Since inequality of gifting, inappropriateness of gifting and general lameness of gifting due to spending limits haunts the holiday office gifting process, I’d recommend a, “Holiday Secret Giver” program where employees would draw names of their fellow coworkers and a link to that coworker’s favorite charity. They would then give a contribution to that charity in the giftee’s name. The amount of the contribution would be equal in all cases — say $10 to $20. This way, instead of gifts you really don’t want but can’t get rid of, each employ would have a stress-free way of acknowledging their coworkers, celebrating the season and doing a little good for the world along the way.

I agree with several others that curated assortments specifically suited to office exchanges feels like an appropriate way to be helpful. I especially like Chris Petersen’s suggestion to include gifts connected to charitable contributions.

Workplace gifts represent two opportunities. First is the opportunity to include products for a targeted event, like bridal shower gifts, with a list of best selections in a manner that makes it easy for customers to purchase and have delivered. Second would be the opportunity to be a disruptor and see if there is a market for corporate gifting that extends to employee recognition and birthday celebrations, etc.

While consumers address these needs in a variety of ways, there is no consolidated service that makes it easy.

Adding a section online and/or in-store dedicated to fun office gifts is a huge market that retailers are missing! Even offering some literature in-store or gift guides online would be super helpful for busy office workers who don’t have the time to browse or get creative.

What’s the largest pain point? Time. I was at a car dealership last December when a woman came in carrying an armful of gift baskets. She was targeting the salespeople who hadn’t had time to shop yet, and she sold them all. Rich and I have always recommended that retailers create a “Top 10 List of Holiday Gifts” by consumer category for what they sell. Gift giving can be hard to figure out — who needs another Executive Dartboard? A selection of co-worker gift suggestions just makes sense.

Based on all the cautions, perhaps they can offer specials on that (soon-to-be) bestseller “Lawsuits for Dummies.” OK, as my Scrooge-like roll continues, I think this may just be another one of those (many) times where there isn’t much of an “opportunity.” Though based on the price points mentioned, dollar stores, Walmart, et al. may come up with some ideas.

There is a lot of angst associated with buying gifts for colleagues, be they peers, bosses, or subordinates. It’s also inconvenient. But online retailers can provide an advantage for thoughtful professionals who end up rushing to crowded malls or simply buying from Amazon by default.

Advantages include workplace-sensitive recommendations, popular items, and time savers like gift wrapping and tags pre-filled with the recipient’s name. The gift may not be an item at all but rather a donation to his social cause that may be eligible for company matching.

Presents-for-coworkers can be better marketed as a unique shopping occasion distinct from traditional gift occasions. With these occasions, it’s the thought that counts, and stress-avoidance and convenience that wins.

Braintrust
"When shoppers are under pressure to get something — having some helpful tips, hints and suggestions can be a saving grace."

"Talk about holiday stress! Nothing like trying to find the “perfect” gift for a co-worker that does not offend and break your budget."

"I agree with several others that curated assortments specifically suited to office exchanges feels like an appropriate way to be helpful."