Are Old Navy’s issues more about demand than supply? 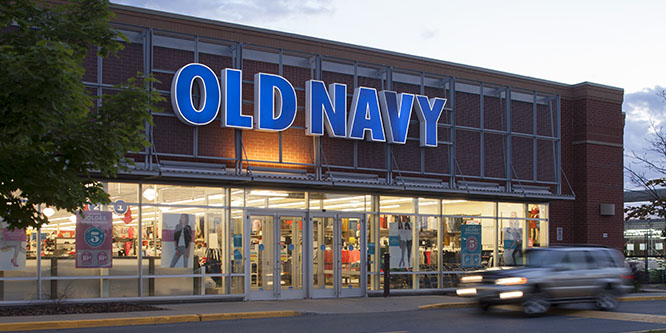 Shares of Gap Inc. plunged 18 percent on Friday after the mall-based clothing giant announced the exit of Old Navy’s CEO, Nancy Green, and lowered its guidance.

Gap CEO Sonia Syngal said in a statement, “As we look to seize Old Navy’s potential, particularly amidst the macro-economic dynamics facing our industry, we believe now is the right time to bring in a new leader with the operational rigor and creative vision to execute on the brand’s unique value proposition.”

Ms. Syngal, who led Old Navy for four years before being promoted to CEO in March 2020, will work closely with Old Navy’s team as a search for a successor launches.

Citing “macro-economic dynamics as well as the execution challenges” at Old Navy, Gap’s first-quarter sales guidance was lowered to a decline in the low to mid-teens. Gap also cited a need to increase promotions at Old Navy.

Old Navy, the second largest U.S. apparel brand after Nike, had been the darling in Gap’s empire amid Banana Republic’s struggles and that of its namesake chain. A planned spinoff of Old Navy was canceled in early 2000 that some attributed to fashion miscues, including missing the wide-leg pant trend and not stocking enough playful looks. Competitive pressures from discounters and off-pricers as well as a shift away from fast-fashion were also possible contributors.

The current problems are being attributed to port congestion and factory closures that have led to understocks. Fourth-quarter same-store sales were flat at Old Navy compared with 2019 levels.

On its fourth-quarter analyst call, Ms. Syngal said customer preferences had undergone a “pretty radical” shift from “cozy and active and fleece” for much of the pandemic to dressier, back-to-work styles and wide-leg jeans. Logistic bottlenecks have slowed efforts to rebalance assortments.

Inflation also risks reducing the overall spend of Old Navy’s lower-income customers. Jinjoo Lee wrote in The Wall Street Journal that, “Old Navy’s affordable, family-friendly clothes ought to be precisely the kinds of products that inflation-squeezed households will be seeking out today. If they can’t find what they want at Old Navy, they will go elsewhere.”

DISCUSSION QUESTIONS: Do you see Old Navy’s current problems as a short-term blip or requiring a longer-term fix? How would you access the strengths and weaknesses of the chain amid the inflationary climate and competitive landscape?

Please practice The RetailWire Golden Rule when submitting your comments.
Braintrust
"As consumers shed their sweats and sustainability enablers like ThredUP onboard more retail partners, Old Navy’s niche is wearing thinner by the day."

"I would be tempted to say the problems are shorter-term, but you don’t fire the CEO if that’s what you believe."

"Old Navy’s blip is just that. A short term challenge that they will overcome as they spend more time determining what the customer is looking for."

17 Comments on "Are Old Navy’s issues more about demand than supply?"

I see Old Navy’s current problem as a combination of both short and long term issues. There’s no doubt that Old Navy (and other apparel retailers in particular) have taken it on the chin with supply-chain issues. With so much of their product manufactured overseas, it’s not hard to see why. Old Navy still has a place and, prior to the pandemic, it was performing well. Overall, and notwithstanding the immediate challenges, I do think Old Navy can find success again — but it won’t be easy given the headwinds.

Given the current economic climate and inflation pressures, Old Navy should be in a prime price-point segment of retail. With affordable apparel prices and a fairly loyal customer base, Old Navy is in a good position to weather this storm. The key for Old Navy is to be at the forefront of new fashion trends.

Old Navy’s blip is just that. A short term challenge that they will overcome as they spend more time determining what the customer is looking for.

Shoppers are more fickle and price conscious than ever before. This is clearly a product assortment issue in addition to an ongoing supply chain issue.

For the most part, Old Navy gets it. It’s inclusive and representative. They missed the mark on a few trends but that will pass.

The supply chain hasn’t seen the end of disruption and all retailers are still navigating the impacts of factory closures, capacity constraints and longer lead times. This is not just an Old Navy problem.

Old Navy is essentially a fast non-fashion player and as such is quite vulnerable. As consumers shed their sweats and sustainability enablers like ThredUP onboard more retail partners, Old Navy’s niche is wearing thinner by the day.

Well, they said it right — they need operational rigor and creative vision. At a time when lower-priced fast fashion should be in vogue, Old Navy is not. They have lost their touch in terms of staying in tune with consumer needs and desires and need to gain back trust. Their stores are messy and not as inviting as they once were. However their model works, just look at the growth of Shein.

The past five years of upheaval and change at the head office are catching to all the brands under the Gap umbrella. Old Navy has a rare opportunity to align their products and price point with where the consumer sits in these volatile economic times. And Old Navy’s brick-and-mortar network is a tremendous advantage over their online only competitors. If they can stabilize their leadership, get their physical stores organized to support e-commerce and find workarounds for supply chain glitches, they could do very well.

Old Navy is the strongest of the Gap brands, in my opinion, because of its marketing positioning. (My most recent visit to a Gap store produced sticker shock.) It is accessible. Its sizes are consistent. Build on the basics and enjoy success.

Old Navy’s problem is merchandising agility. When you are reacting to changes in buying behavior, then you better be fast in execution. It is more effective to use early signs to anticipate the demand shift and position yourself to win. Overall, I see more positive than negative for Old Navy and the parent company Gap, especially with their successfully timed and assorted Athleta division.

The death of Old Navy is wildly exaggerated. They will bounce back. They have amazing brand equity that operates practically at the subliminal level. Whenever I see one of their commercials begin, I immediately know it’s them based on the energy and colors. I am also seeing a product shift in Banana Republic, perhaps a back-to-the-future move to capture some of their old panache.

That being said, Old Navy can’t afford to miss the boat (pun intended) on fashion trends. In fact, they need even more lead time than ever in order to stay ahead of the ongoing supply chain slow down.

Quoting from the discussion, Ms. Syngal said: “customer preferences had undergone a ‘pretty radical’ shift from ‘cozy and active and fleece’ for much of the pandemic to dressier, back-to-work styles…”

Understanding what Old Navy has stood for since its inception, do I detect a contradiction?

I would be tempted to say the problems are shorter-term, but you don’t fire the CEO if that’s what you believe. So, I suspect the board of directors thinks the problems are structural. To be honest, I don’t understand why — as Cathy said, it’s an inclusive, accessible brand, but clearly there’s something we don’t see in that troubled corporation.

Reminds me of Mickey Drexler getting the boot after a couple of tough years. Tough years that came on the heels of what now might be considered the zenith of Gap’s position in the market. Only to be followed by several non-merchant CEOs who never quite figured it out. Old Navy experienced some softness but I’d have to look at a couple years worth of comps and profitability to understand the real validity of booting the CEO. Especially after reading the amount of press that is supportive of Nancy Green and her contributions to the business.

There is no one issue with Old Navy — they are “old.” Seriously, they are tired. They were the full price outlet of their day and now they don’t seem to have a lane. You don’t think of them as fast fashion, or style icons or even the basics destination. I am sure supply chain issues and inflation have exaggerated their challenges. With increased threats of a recession Old Navy could reign again, but they need to couple operations with marketing.

Despite Ms. Syngal’s brave face, unexpected leadership departures are seldom good news; and in the case of the GAP group — while it’s hardly in the Sears or even JCP camps — the perception of <rudderless will only grow.

There is an overall macro effect that is affecting almost every retailer and wholesaler across the board. This will hopefully subside as we exit the pandemic and things start to return to normal. Missing a trend or being late can happen to the best retailers but are usually not fatal, that said missing them consistently is. I think that Old Navy is a great brand and with high inflation, one that people will gravitate to as it continues. This is an opportunity they can take advantage of if they regroup and execute well.

Old Navy is having issues because while their price point is correct, their client base is fragmenting: There is a trend away from fast fashion wear for environmental concerns, Existing fast fashion fans now have options from the social media driven brands, and the supply chain issues means Old Navy can’t respond as quickly as before to address new trends.

The challenges in Old Navy’s supply chain have obviously put it at a disadvantage. However, the fact that they have been able to retain their sales despite these obstacles illustrates that this is only a short-term issue that can be overcome with time. If it had been a serious issue, Old Navy would not have been able to compete with its strong competitors who had already overcome supply chain challenges. They have been able to survive this turmoil because Old Navy knows its consumers well and serves them accordingly, which is actually their greatest strength.

Braintrust
"As consumers shed their sweats and sustainability enablers like ThredUP onboard more retail partners, Old Navy’s niche is wearing thinner by the day."

"I would be tempted to say the problems are shorter-term, but you don’t fire the CEO if that’s what you believe."

"Old Navy’s blip is just that. A short term challenge that they will overcome as they spend more time determining what the customer is looking for."