Can a grocery store teach its customers to love to cook? 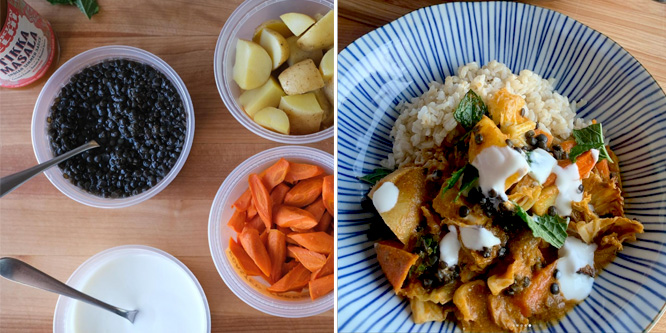 A grocer in Utah is opening a store that aspires to focus on meal prep instead of just selling groceries, guiding customers to cook creatively with a limited number of locally produced ingredients.

Marcellus Foods, which plans to open its first store in Salt Lake City, UT, early in 2023, will carry only about 80 prepared ingredients, such as meats, vegetables, grains, vegan proteins, sauces and spices, according to the Salt Lake City Tribune. This is less than both the 290 that Eve Cohen, founder, says customers on average purchase per year, and the 35,000 that the average grocer stocks. The products will come from local farms, orchards and producers.

The grocer plans to offer cooking suggestions and “formulas” for putting together meals, rather than traditional recipes, in a way meant to help teach people to cook to their own tastes depending on their skill level. A digital platform will be in place to help customers use the ingredients. Long-term, the store’s founders see Marcellus Foods as becoming part of a nationwide network of what they call “human-scale local food processors.”

Cooking at home experienced a big bump in popularity at the beginning of the pandemic when lockdowns nationwide prevented people from going to restaurants.

A number of surveys that came out earlier this year, however, point to waning interest in home cooking compared to the pandemic peak.

The “U.S. Grocery Shopper Trends 2022” study by the Food Marketing Institute (FMI) showed the number of Americans who “like” or “love” cooking dropped year over year from 46 percent to 41 percent. Six in 10 home cooks reported being burnt out on cooking in a Jennie-O study and 70 percent said they were bored of cooking the same meals over and over.

While a limited, localized selection could set a grocer like Marcellus Foods apart, other grocers have deployed cooking-focused content strategies before. In 2019, Publix debuted online, interactive cooking classes led by a live chef. Others, like Whole Foods, have offered cooking classes in-store.

DISCUSSION QUESTIONS: Will a grocer with a stripped-down inventory, dedicated to helping customers with meal prep, succeed in the long run? What are the chances of such a concept catching on nationwide?

Please practice The RetailWire Golden Rule when submitting your comments.
Braintrust
"This is a great idea that more grocers should implement."

"I don’t know about the claim of eliminating 85 percent of the time and effort but love the concept."

"I like this idea a lot, but I worry it will be expensive – isn’t this just like the Whole Foods hot bar?"

13 Comments on "Can a grocery store teach its customers to love to cook?"

Easy to put together meals are great. And, as noted, will help people be more successful cooking in their homes. But the headline “love to cook?” More like it makes a chore I don’t like a bit easier to accomplish.

Man, I hope so. This is a great idea that more grocers should implement. I am sure there are many men like me who would like to cook more but never really learned. The reasons are many. Mine is that my wife happens to be a great cook and so is my daughter. A program like this would make it much easier for me to at least try. I happen to be the only man in my family among my siblings and my son who can’t cook. Perhaps when I retire?

It’s a smart way to invigorate novice and fatigued cooks, and inspire culinary creativity. Elevating a daily chore into a passionate pastime will give this grocery model lasting appeal.

Great digital experiences have lowered consumers’ patience threshold on nearly every topic, regardless of if it’s reacting to a mobile app or cooking dinner. Toss in the YouTube learning effect (watching “how-to” videos for nearly anything) and you have a set of very good dynamics that naturally cater to upside potential for Marcellus Foods.

Apparel stores show the customer how to dress, how to assemble outfits, how to mix and match, and how to roll with the seasons. So much of our personal growth is a function of exposure to the right “how to” moments. Learning is best achieved when it’s fun and entertaining. And learning can be a great loyalty builder. So absolutely grocers, teach me. I love my marinated and grilled chicken, but enough already!

While I like the concept (and I hope it does well), I can’t see customers shopping there on a consistent basis. Retailers like H-E-B and Wegmans have long been doing this with their in-house demonstrations (with the meal ingredients right outside the cooking station) even suggesting wine and possible dessert options to accompany meals. Those retailers are also complete shops so there is no need to drive to additional locations to finish their shopping trips.

I always say I prefer to “assemble” rather than cook. This is really just assembling a meal since the “ingredients” aren’t “ingredients” after they’re prepared. I like this idea a lot, but I worry it will be expensive – isn’t this just like the Whole Foods hot bar?

I don’t know about the claim of eliminating 85 percent of the time and effort but love the concept. Of course, I love to cook and so does my wife. But I believe the trend toward customers being less likely to cook at home is due to sheer demand on time or lack of time to prepare plus all the cookbooks in the world still require creativity to prepare a properly balanced meal. You simply get tired of cooking and want a break. This concept speaks to freshness, healthy eating, overcoming that boredom we all run into and so much more. Plus, it is attractive to several target groups – empty-nesters, young married couples with no kids and upper income households. I think I’ll reach out to Marcellus Foods and see if I can offer wine services to complement every meal choice!

With today’s demand on time and priorities, cooking is low on the list.

With 46 percent of shoppers in our latest Feedback Group national study opting to eat more often at home instead of at restaurants as an inflation coping strategy, helping customers learn how to put meals together in a way that works for them makes sense. A good idea that more grocers should evaluate!

Will this grocer succeed? In the short term, yes. They will have strong initial interest from a culture that is looking for the next cool thing, wanting to try out new experiences, and in a geographic location and culture where this kind of “new” thing will be popular. However in the long run they will fall victim to customers needing to take the extra time to go to another store to complete their regular shopping and the difficulty of keeping the experience new, interesting and relevant enough to justify the time investment by their customers.

This is a winner over the long term if it’s targeted correctly and remains engaging.

What’s great about meal prep as a focus for grocery is, not everyone wants to cook in the traditional sense or has time with 8-10 ingredients, at 1 hour or more. Meal prep can be a healthy alternative, and can close the gap in between buying food from the deli and traditional recipes.

There are other independent grocers who have done well mixing in meal prep for many years as part of their focus on great tasting food. And so Marcellus should do well.

This is an amazing initiative. Few of us, or our children, were taught to cook at school and the advent of convenience foods means that skills become more and more scarce. People are sometime scared to experiment — anything that encourages people to cook — seeing it is easier than they thought is good.

Could it catch on? Possibly if the financial benefits are highlighted — cooking yourself is so much cheaper than alternatives. Consider aligning this with weekly menu planning that drives a shopping list will help consumers with their spending. In uncertain times this could be a big fan winner.

Braintrust
"This is a great idea that more grocers should implement."

"I don’t know about the claim of eliminating 85 percent of the time and effort but love the concept."

"I like this idea a lot, but I worry it will be expensive – isn’t this just like the Whole Foods hot bar?"