Can Bon Ton Stores return from the dead? 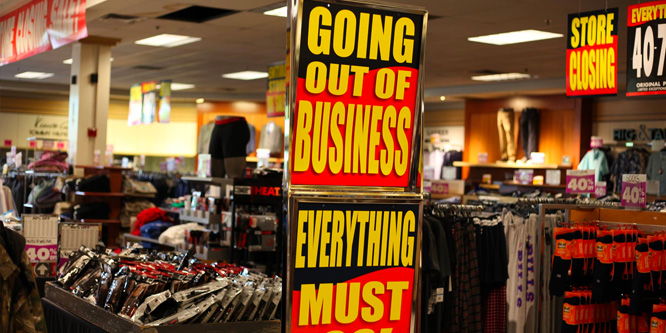 Bon Ton Stores, which last week completed the liquidation of all its banners, is reportedly planning a comeback.

“We’ve got great news. Bon Ton is coming back!” a message reads on Bon Ton’s website. “Stay tuned for updates over the coming weeks. We appreciate your loyalty & look forward to being able to serve you again soon.”

Similar messages were posted on the websites of Bon-Ton Stores’ other banners: Boston Store, Carson’s, Bergner’s, Elder-Beerman, Younkers and Herberger’s.

A source familiar with plans told USA Today that the prospective owners plan to bring back Bon Ton Stores as mostly an online retailer with a limited number of brick-and-mortar locations.

The company had sought a sale after filing for bankruptcy protection in February, but a deal with a group of mall owners and a private equity firm fell through. In April, a joint venture between liquidators and a group of debtholders acquired Bon Ton’s remaining inventory, and going-out-of-business sales began.

A separate effort has been ongoing to sell Bon-Ton Stores’ intellectual property, including trademarks, domain names and customer lists.

Bon Ton Stores, which had not made a profit since 2010, largely blamed heightened online competition for its downfall. The retailer said in court papers, “Bon-Ton, with a significant geographic operating footprint and operating presence, is dependent on store traffic, which has decreased as customers shift increasingly toward online retailers.”

Pressure from other anchors, like J.C. Penney, Kohl’s and Macy’s, was also cited.

If successful, Bon-Ton Stores would become one of the few retailers to come back post-liquidation. Montgomery Ward, Sharper Image and Circuit City are among the few that have at least reestablished an online presence.

DISCUSSION QUESTIONS: Do you see an opportunity for Bon Ton Stores with all its banners to make a return? What will be the keys to success?

Please practice The RetailWire Golden Rule when submitting your comments.
Braintrust
"While you can never say never, in this case never is a good bet."

"It’ll be a long road ahead for Bon-Ton if it wants to re-emerge as an online retailer."

"Another very costly issue was them maintaining their seven namesakes which meant extra dollars for advertising and marketing."

18 Comments on "Can Bon Ton Stores return from the dead?"

I think it’s very doubtful that Bon Ton can make a successful return. With its mishmash of banners and questionable value proposition, I see no obvious niche where it can gain (re-gain) a foothold. Reforming primarily as an online play doesn’t make sense either given the vast array of online options including the growing online strength of Bon Ton’s traditional competitors. While you can never say never, in this case never is a good bet.

Buying the bones of a bankrupt retailer does not make you able to re-create the brand online.

I see very little opportunity here. Bon Ton failed because it was an undifferentiated department store that sold undifferentiated products that could easily be obtained elsewhere. How will this now change?

Admittedly, moving to a more online-centric model seems sensible, but it still has significant costs attached and it also has the disadvantage in that Bon Ton will be increasingly out of sight and out of mind unless marketing is ramped up significantly.

In my view, this is simply throwing good money after bad.

Unless Bon Ton reinvents itself in a far more imaginative and differentiated way, a return is quite suspect in my opinion. Its traditional space (both brick-and-mortar and online) is crowded and uninspired.

Bon Ton Stores has one of its dual headquarters here in Milwaukee, so I’ve followed this story closely. (And its Boston Store nameplate just closed five stores in this market.) This development, coming a day after the store closings, is frankly baffling for several reasons:

First, who is behind the move to resuscitate Bon Ton Stores? (I doubt that the liquidators play any role in this.) Second, what happens to the real estate that others (Dillards, Von Maur) have already shown an interest in? Third, who’s going to run the business after so many Bon Ton executives have moved on and (in many cases) relocated?

Finally, and most important, who thinks Bon Ton and its nameplates can survive as primarily e-commerce retailers when they were so late to the omnichannel game in the first place? Right now the entire enterprise feels like damaged goods.

I don’t see Bon Ton being that successful as an online business but if they reopened the right locations that could work. Bon Ton can blame e-commerce for their demise and there is some truth to that but they, unfortunately, took on too much debt and did not keep their stores up with the times. The advantage Bon Ton always had was that many of their locations were in secondary markets where they were the only store around. However, when shopping in those stores, customers experienced poor customer service, out of stock items and often unwanted merchandise leaving customers to buy elsewhere. Another very costly issue was them maintaining their seven namesakes which meant extra dollars for advertising and marketing. Macy’s eliminated all their division names, and that saved them millions of dollars operating as one company. Bon Ton should have done the same thing years ago. I don’t see Bon Ton having the name recognition to be a thriving e-commerce business, but with the support of strategically place brick-and-mortar locations, primarily in the secondary… Read more »
8
|
-1
-   Share

The bifurcation of retail meant one thing: a brand like Bon Ton largely positioned in suburban centers (declining), with a very basic middle-market assortment that lacked relevance can’t make it. There isn’t a single product or service in a Bon Ton store (all banners) that couldn’t have been acquired via Amazon with a fraction of the effort and the certainty of what you’d be receiving.

I worked at Milwaukee’s Boston Store in the ’70s and back then it was a magical place. Can you imagine what it must feel like to have been employed at a Bon Ton store and read this headline? Yikes.

The store names have value. An online business backed up by a few stores won’t be enough; it’s going to take an entirely new mindset. And killer marketing. I’m not sure if Bon Ton Stores can make a successful comeback, but I sure would like to see them try.

There is no need for another retailer like a retailer that once was. Any new retailer must be new in every sense of the word. How many times has this been tried and been successful?

I did not know they were still in business before they went out of business. What is the benefit in attempting a comeback when the first go around was not successful? Put your money somewhere else.

It’ll be a long road ahead for Bon Ton if it wants to re-emerge as an online retailer. The retailer had too much competition from other, more recognizable names and that hasn’t changed. Bon Ton would have to find a product or service that differentiates it enough to compete, and that is unlikely. Too many shoppers already use Amazon, Walmart, Target and others when buying online. It doesn’t look good for Bon Ton.

Recreation of days gone by. To gain mental positioning in the customers’ minds today will be an extremely difficult challenge and will require big money, patience and incredible marketing strategies.

The pros for it working is that they’ve got “home town” name plates in each of the markets that they serve, making it more nostalgic to their customers, they aren’t saddled with huge debt, and they will have a nimble infrastructure that they can make whatever they imagine it to be. The down side is they currently have zero infrastructure, so it will have to be built from scratch. Depending on the financial support and the leadership behind this movement, I think they have a shot.

I don’t think any of these online “revivals” has much potential: much like the human body, once a business is dead, it’s dead.

The goal, of course, is to try and capture some of the equity wrapped up in a brand, but if it isn’t the same people, and the thread of continuity has been lost, is it really the same brand? Occasionally a company has been absorbed by another, yet still continued in business, and (later) ownership re-names (really re-renames it) back to the old. That makes some sense — though I often feel even it is a stretch. But once the company is dissolved, I just don’t see it. And I won’t get into specifics of whether or not Bon-Ton is really a high equity brand to begin with.

So they closed. What void did they leave? What solutions were they providing that aren’t available by simply parking at a different end of the mall parking lot? I haven’t shopped in one of their stores in a long time, so maybe I am being unfair. And yes my comments could apply to other retailers. But therein lies the problem. I am actually a big fan of regionalized retailing … meaning life before Macy’s dropped all the regional monikers. “Regional brands” gave way to “national brands.” Relationships gave way to efficiency. Or did they?

I’d love to see regional department stores make a comeback. It’s a different century. What’s the new WHY? and what’s the new HOW?

The department store segment is very challenging as it is predominately commodity products (items sold at many retail brands) that make it difficult to differentiate beyond price. Bon Ton did have some private label brands and as part of their return, they may expand their private label brands to help protect it from price competition and potentially open up a wholesale channel to complement the eCommerce play.

Bon Ton should also consider consolidating its brands into one brand like Macy’s strategy when they acquired new brands. With one brand, they can maximize their marketing spend.

It will be interesting to see how many stores they reopen. They may opt for an online focused presence like Coldwater Creek did when they restarted their brand after bankruptcy.

Their private brands weren’t necessarily a strength, but their community nameplates definitely are. Most people in the Midwest couldn’t care less what happens to Macy’s, but Chicago still mourns Marshall Fields, and Minneapolis misses Daytons. Carson’s, Younkers and Boston Store may not mean much to you, but they have a rich history in the communities they serve since 1854, 1856 and 1897 respectively. That is where their opportunity lies if they can bring back a streamlined operation not overly burdened by debt.

Is Bon Ton planning to make an online presence or are they trying to sell their websites to another retailer? Unless they do a lot of marketing, consumers are going to assume they’re bankrupt, out of business and go elsewhere for their merchandise. Bon Ton’s strength was never their online presence and website experience, so I don’t see this as a viable endeavor.

Braintrust
"While you can never say never, in this case never is a good bet."

"It’ll be a long road ahead for Bon-Ton if it wants to re-emerge as an online retailer."

"Another very costly issue was them maintaining their seven namesakes which meant extra dollars for advertising and marketing."