Can David’s Bridal appeal to ‘every type of bride’ with its new campaign? 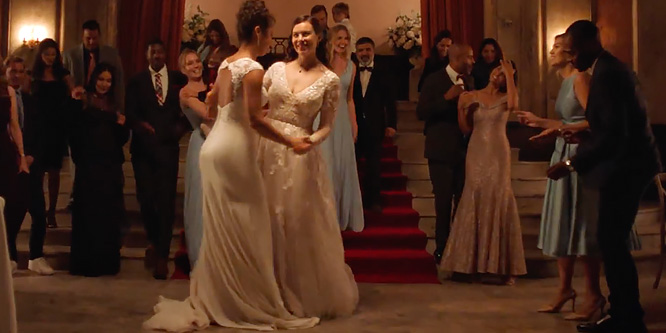 David’s Bridal, the largest wedding retail chain in the U.S., is just a couple of months removed from filing for Chapter 11 bankruptcy protection. At a time when modern Americans are marrying later in life when compared to previous generations, the retailer has also been hurt by  growing competition from online retailers.

There’s no doubt the chain faces challenges, ones that Liz Crystal, David’s chief marketing officer, believes it can meet with a new campaign that features what Ad Age describes as “non-traditional brides.” This includes same-sex brides and those who enter their marriages with children.

“We wanted to make sure this spot represented what we see from brides today,” Ms. Crystal told Ad Age. “We value every type of bride.”

Ms. Crystal said the new campaign’s focus on the brides and not on dresses or the chain’s in-store experience is a departure from what David’s has traditionally done.

Today, 67 percent of Americans support same-sex marriage with the percentages of those who favor it growing steadily year-by-year, according to Gallup. Same-sex marriage has been a constitutional right in the U.S. since 2015 and billions of wedding dollars have flowed into the national economy over the past several years as a result.

DISCUSSION QUESTIONS: Is David’s Bridal on the right track with its new ad campaign? What else must the retailer do to become more relevant as the marketplace changes?

Please practice The RetailWire Golden Rule when submitting your comments.
Braintrust
"Brides come in all sizes, shapes, ages, and more, way beyond the 'Disney princess' image we used to have. Kudos to David’s Bridal."

"I only hope the retailer has included diversity training for its associates. My experience leads me to believe that’s a must."

"Haven’t you heard? Millennials killed marriage alongside all their other casualties like books and home ownership."

11 Comments on "Can David’s Bridal appeal to ‘every type of bride’ with its new campaign?"

I love the inclusion – spot-on. Their stores, however, are a different matter so I see why they would want to focus on the message, not the experience. The days of mass-market wedding dresses seem to be waning – the future is selling to the one and it takes much more than a marketing campaign.

Brides come in all sizes, shapes, ages, and more, way beyond the “Disney princess” image we used to have. Kudos to David’s Bridal. (I must add that my daughter and I had a delightful experience with the talented and dedicated store associates at our David’s Bridal a few years ago. I’m a fan.)

I want to make it clear that I have no issue at all with same-sex marriage and I believe anyone has the right to marry whomever they wish. That said, when looking at David’s Bridal, I doubt their new campaign will be enough to turn the company around. The problem has been poor quality. Secondly, their stores have horrible customer service, and when a woman, I don’t care what age is getting married, she more than ever wants the attention and service she deserves. David’s Bridal for too many years forgot who they were and continued to put out inferior merchandise mixed in with the better-quality items, often making it difficult for the customer to make the right selection. The many issues on social media of how dresses got lost, were not delivered on time and problems with the alterations have no doubt contributed to the company’s loss of business. David’s Bridal is okay to have a new campaign and including same-sex marriage is equally okay, but unless they step up the quality of their… Read more »
6
|
0
-   Share

Our culture is all about diversity and appreciating the richness of all of our cultures. What better place than retail to respond and adapt to our changing and evolving demographics? With the right blend of social consciousness and spending the necessary time to really know who your changing target customers are, there is an opportunity for David’s Bridal to attract and retain new customers.

Some interesting stats in a new study from Brides magazine, showing the blossoming of the wedding industry and related retail opportunities:

I agree with the Doc — the times are changing, both in consumer preference and amount of consumers. (Haven’t you heard? Millennials killed marriage alongside all their other casualties like books and home ownership.) Of course the inclusion is encouraging, but David’s Bridal may be speaking to a waning base, or if anyone’s getting married, they’re shopping on Etsy and buying from makers or shopping at boutiques for something less cookie-cutter for the ‘gram. However, I like cheering on a brand willing to take creative risks even when it’s late — wouldn’t want any retailer to get eaten by debt without at least giving a good fight.

Yes, David’s is on the right track for so many reasons. Weddings share the top spot with only a handful of other emotion-driven lifetime events. Flipping David’s internal dialogue from selling wedding dresses to that of the purveyor of emotionally wonderful wedding experiences is a good bet. Goodwill and engaging the many versus the stereotypical twenty-somethings is good for the heart and good for business. Hopefully this is more than a marketing campaign. David’s has a niche, needing reinvention. This is an exciting time, with many new opportunities if David’s is sincere in their “every type of bride” campaign.

I love the marketing campaign and its relevance to their Millennial core audience. Now they have to back it up with dress personalization and exemplary service, both online and at the store. Or their Chapter 11 bankruptcy protection will quickly escalate to liquidation sales. Like the physical retail mattress business, the wedding dress biz is primed for online disruption.

The inclusive message is great. However, being in tune with prevailing social views does not solve all of the company’s issues.

Foremost among these is the heavy debt load and a challenged business model. The two make for very unhappy bedfellows as the high debt often leaves limited room for maneuver when it comes to reinventing the proposition, and a broken proposition puts pressure on the financials which makes it tough to pay off debt.

While David’s Bridal used to be the dominant force in bridal outfitting, it gradually became less relevant. Broad trends have been against it, including fewer people getting married and a casualization of weddings. Rivals have also moved in on its space, especially online. Retailers like Anomalie offer a much more modern and exciting service, which allows brides to create bespoke gowns; while online players such as Floravere provide a relatively cost-effective way of buying designer gowns.

Late is better than never. Focusing on meeting the needs of an ever-growing base of individual brides is a great step. I only hope the retailer has included diversity training for its associates. My experience leads me to believe that’s a must.

It’s not uncommon for companies to demonstrate their inclusion values through advertising. I don’t think it’s a sufficient premise, especially related to a $25,000 prize, to convince brides that they should shop at David’s Bridal. There has to be more about why their dresses (and other garments/accessories) align with the emotions and vision of brides.

Braintrust
"Brides come in all sizes, shapes, ages, and more, way beyond the 'Disney princess' image we used to have. Kudos to David’s Bridal."

"I only hope the retailer has included diversity training for its associates. My experience leads me to believe that’s a must."

"Haven’t you heard? Millennials killed marriage alongside all their other casualties like books and home ownership."