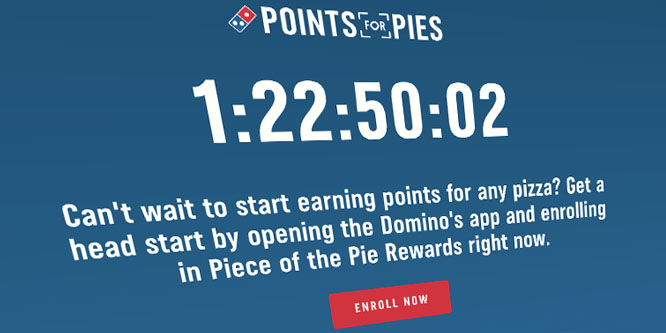 Will a rising Domino’s lift all pizza sales? Clumsy adage knockoffs aside, Domino’s is launching a new rewards scheme that the company believes will lift not only increase its own sales, but the category as a whole.

The new offer, which begins on Feb. 2, is tied to Domino’s Points for Pies rewards. Anyone registered on the Domino’s app can send a photo of a pizza – no matter where it was purchased – and receive 10 rewards point from the chain. People participating in the program can send one photo a week and receive a free two-topping medium-sized pizza from Domino’s once they’ve reached 60 points.

CEO Rich Allison told CNBC’s Jim Cramer that he believes that if Domino’s can get consumers who eat rival pizzas to try its product, “We’ve got the opportunity to bring them back again and again.”

Domino’s is launching the new rewards offer as it approaches one of its busiest days of the year – Super Bowl Sunday. The chain said it typically sells nearly two million pizzas – roughly 40 percent more than the average Sunday – on the day of the big game. It also sells about four million chicken wings.

One change from past Super Bowl Sunday weekends is that Domino’s won’t be running commercials during the game’s broadcast.

“Instead of advertising during Sunday’s game, we decided to invest in a breakthrough program that rewards everyone who loves pizza as much as we do,” said Art D’Elia, Domino’s senior vice president – chief brand officer, in a statement. “We know everyone is asking themselves, ‘Did Domino’s just say they will award points for eating any pizza? Even from a competitor?’ You read that right; oh yes we did!”

DISCUSSION QUESTIONS: Will Domino’s Points for Pies program prove successful in converting large numbers of customers from rival pizza sellers to its own? What do you see as the strength/weakness of the Points for Pies rewards program offer?

Please practice The RetailWire Golden Rule when submitting your comments.
Braintrust
"Getting the message out is key, I think this will be a great viral promotion that will sting competitors."

"...there will be curiosity and some novelty to this campaign, but the likelihood of converting true pizza lovers into Domino’s customers is slim."

"I will be interested to see how many return customers it generates. There is a reason they weren’t eating Domino’s in the first place."

14 Comments on "Can Domino’s gain customers by offering free pizza for pies bought at rival shops?"

This is a clever move by Domino’s. It is smart advertising as it has already gathered a lot of attention. But, most of all, it is an interesting way of getting those who perhaps do not use Domino’s to download the app and incentivize them to give the chain a try.

It is definitely a breakthrough marketing approach that will create immediate customer attention. The smart aspect of promotion is that customers can only send in one photo a week for 10 points and it takes 60 points to redeem a free pizza. That stretches out the campaign awareness at least six weeks, which is longer than most any Super Bowl TV ad. However, the most important and lasting part of the free offer is getting customers to try both the Domino’s app and their pizza. One thing for sure, Domino’s will see if their campaign on building a better pizza delivers.

Brilliant. Getting the message out is key, I think this will be a great viral promotion that will sting competitors.

This clever promotion reminds me a bit of the local pizza chain whose ad was to” rip out this page” in the phone book and bring it in for half off a pizza.” That page held all their competitors leaving only their name under “Pizzas.”

I think the campaign is smart and innovative. However I don’t know how successful Domino’s will be converting customers. “Real” pizza is very different than what one finds at Domino’s. There are those who like Domino’s pizza, but they will never attract the true pizza lover. McDonald’s and most of the QSR restaurants attract customers who love the food but the same way you can’t compare a McDonald’s burger to a thick burger cooked on your grill, one can’t compare Domino’s pizza to the many excellent local pizza restaurants. So there will be curiosity and some novelty to this campaign, but the likelihood of converting true pizza lovers into Domino’s customers is slim.

It’d be a great idea if their pizza didn’t taste like cardboard with globs of fat on top! They seriously need to improve their product, especially with all the excellent new third-wave pizza joints popping up. After all, product is the number one priority, right?

Every expert seems to support the idea and loves the creative approach. The negative responses have not been about the promotion but the quality of the product. I think people are missing the things that makes this not a good promotion but an awesome one:

We have to consider that a lot of people will do this just to get a free pizza. I will be interested to see how many return customers it generates. There is a reason they weren’t eating Domino’s in the first place. Right? For my 2 cents.

The fact that we are discussing this promotion on RetailWire is proof positive of the inventiveness and cleverness of this move. Time and Domino’s pizza sales will tell if this works beyond expanding awareness. There is always a risk when rewarding customers for patronizing the competition. Many moons ago, Albertsons ran promotions financially rewarding shoppers to surrender their competitors’ frequent shopper cards, failing to realize how easy it would be for those shoppers to get a new one upon return to the competitive store. The fact that I remember this promotion 20 years later tells me that it had advertising value, even though Albertsons never appeared to gain marketshare post promotion, nor did they run the promotion on a consistent basis. Accordingly, my sense is that when the smoke clears, Domino’s will see a small bump in sales from the reward redemptions, but will enjoy no long-term benefit from the effort.

Reminds me of the Whopper Detour. For those already loyal to Domino’s I don’t see much of an impact. It should lead to more business from split shoppers and new customers downloading the app and collecting points though. Regardless, it will undoubtedly generate quite a lot of press.

Yesterday on one of my credit cards I applied a large credit accumulated from “points.” Today (at work) I will pay several bills so as to take advantage of discounts or similar “rewards” programs, and as I scrolled thru my e-mail to reach RW I crossed a half-dozen sales, coupons, “special-offers”….

I wonder if promotion fatigue is setting in with the rest of the populace. I know it is with me.

This is a smart campaign to draw more business after the Super Bowl rush settles down. The question in my mind is yes, people will go for it to get a free pizza — but how many will return?

This is the sort of thing that gets people talking — as it’s clear from here! As a marketing ploy, it’s definitely well thought out in terms of getting press and people downloading the app at least. I think for consumers it’s the sort of thing that’s easy to buy into because you feel like you’re getting something for nothing — even though you’re buying the pizza that you’re taking photos of to get a free pizza!

The fact that it takes 6 weeks to build up enough points to get a free pizza also means that you’re training people to adopt a pizza-a-week habit. That regularity of buying, and routine, may then pay off for Domino’s in terms of getting new customers and retaining them.

As always I’ll be intrigued to find out more how many people actually stick with the program for the full six weeks to get their free pizza, and then how many come back and buy again. Points to Domino’s for trying something different, though.

Although this promotion seems derivative of Burger King’s Whopper Detour and MacCoin deals, the Domino’s version seems to be less effective because it encourages customers to buy its competitor’s pies numerous times before qualifying for a Domino’s pie. Moreover, because it delays the gratification of getting a Domino’s pizza for six weeks, it diminishes the number of customers that will complete the challenge. As an attention-getting gimmick it may have some merit, but it seems flawed in actually converting many customers to Domino’s.

Braintrust
"Getting the message out is key, I think this will be a great viral promotion that will sting competitors."

"...there will be curiosity and some novelty to this campaign, but the likelihood of converting true pizza lovers into Domino’s customers is slim."

"I will be interested to see how many return customers it generates. There is a reason they weren’t eating Domino’s in the first place."