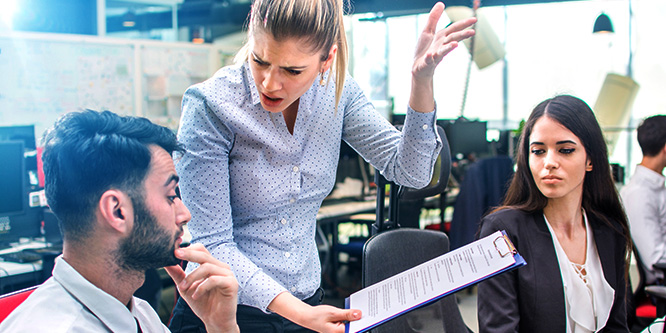 “There’s no crying in baseball!” shouts a red-faced Tom Hanks at a tearful outfielder in one of the most memorable scenes from the 1992 movie, A League of Their Own. It’s a moment that often plays out in the office, where employees are expected to button up their emotions and tamp down feelings to maintain professional poise.

“We found that teams that have this environment where they feel comfortable sharing their genuine emotions with their team members, and they don’t just ignore [emotions] but they work through them, not only come up with better ideas and insights, they get to the richer discussions as well,” said Prof. Parke in an interview with Wharton Business Daily on SiriusXM. “They’re more creative. They produce more creative outcomes.”

Taking a cue from traditional management beliefs out of the 1950s, managers have long eschewed emotions because they are thought to be irrational, the harbingers of conflict and poor decision-making.

The research encourages modern managers to embrace emotions because they signal something important, especially in today’s team-driven workplace. Excitement, for example, could indicate an idea that needs more exploration. Frustration or anger could indicate foundational problems in a project that can’t be articulated.

“It’s not that emotions fundamentally drive irrationality, it’s how emotions are used,” said Prof. Parke. “For example, your gut and intuition can be telling you something important if you analyze and systemically look into that. If you just use your gut without that analysis, then you’re more likely to have bias.”

Positive emotions can also yield bad outcomes, he warned. If everyone on a team is hyped about an idea, rash decisions may move forward.

The most important takeaway for managers is to stop dismissing employees’ emotions.

“I think most significantly and probably urgently for leaders is having the courage to deal with emotions, and not just the positive ones, but being curious, validating people’s experiences, not trying to shove them away, not trying to ignore them,” he said.

DISCUSSION QUESTIONS: Is encouraging the sharing of emotions net beneficial on selling floors, corporate retail offices, both or neither? Is the traditional managerial mantra that emotions often drive irrational decision-making and conflict antiquated or does it hold some truth?

Please practice The RetailWire Golden Rule when submitting your comments.
Braintrust
"Leaders can’t afford to ignore tough emotions because happy workers are more productive and engaged than those who are struggling. "

11 Comments on "Can retailers benefit from tapping employee emotions?"

Being real is always good (at least for me, and I can’t help myself).

I find it interesting that a lot of companies are starting meetings with 10 minutes of mindfulness meditation. I think that’s even more helpful, as it cools the emotions and gets everyone settled down. I have heard companies that do this have been quite successful – at least their meetings go better.

Emotions drive energy, enthusiasm and engagement, and they in turn drive progress. Total plus on all fronts. And that’s not to say that everybody can or should always agree. It’s never going to happen, but that too is healthy. It’s called pressure testing. Let ideas be challenged. Actually, encourage it. It’s the same dynamic as Data + Design, or Left Brain + Right Brain. That’s what happens when you get more than a couple people together in any kind of team environment. Disparity of emotion and opinion can be both encouraged and managed.

Oh wow, well, I think it’s something that probably should happen but I don’t think we are far enough away from legacy management styles to be progressive about it.

A room filled with a variety of professionals with diverse skill sets who feel passion and emote about a variety of issues will unleash more creativity than any traditional meeting. I’ve been fortunate to both LEAD and PARTICIPATE in highly collaborative jam sessions with large/small rooms filled with software engineers, developers, architects, senior sales reps, marketers, consultants, finance and HR reps — and when leveraging transformation methodologies like design thinking are applied correctly, it’s incredible to see how a 30-year old way of doing business is reimagined into an entirely new way of working. The speed at which this can be accomplished is FAST. A few days of white boarding, building demos, failing fast, restarting, demoing again — before the end of three days, a complete redesign can emerge. Sure — there is a longer tail to finalizing the new model, product or service with the layering in of technology and other process/business controls, but the speed at which this can be done is truly remarkable. So bring your passion, your ideas, your positive and… Read more »
2
|
0
-   Share

Emotions are universal and sharing them builds connection. The pandemic’s upheaval means emotions are running high. Leaders can’t afford to ignore tough emotions because happy workers are more productive and engaged than those who are struggling.

That’s why “… having the courage to deal with emotions” nails it. If leaders look at the whole person, their companies could spark powerful breakthroughs that fuel growth.

Consider the status quo. If workers continue to bottle up their fears and resentments, it can corrode their well-being, performance and teams. Conversely, expressing emotions gets them out in the open, subject to both scrutiny and support.

Recognizing that we are all human with accompanying emotions is a great thing for business. Walking the line between productive sharing of emotions and allowing that sharing to become a barrier is a skill most leaders have yet to learn.

Showing emotion often means one simple thing – employees care. Tamping this down can certainly backfire – I’m sure we’ve all seen that happen. Letting passion shine through is a great thing – and it also allows people to learn. If frustration stems from more of a “my way or the highway” attitude, it’s also a great opportunity to coach.

It does get a bit more complicated on the selling floor. While showing emotion amongst fellow employees should be encouraged, it’s more complex if it starts to show in front of customers. Especially frustration or anger.

Are we talking about letting a worker’s passionate feelings about something (their company is doing or not doing for the good of its self) come out at a meeting? Then yes, absolutely. Plus, it’s always better to “say something” than to assume others will. But if it’s about staff being emotional about something that is not business-related? That’s where things start to move in the in the wrong “no, this is not for work” department. I was taught at an early professional age that friends and family were who you went to for sympathetic ears. You can consider a coworker (or a boss) a friend to talk things out with. But overall, work is not for therapy, it’s for business. Meanwhile, this is not about not expressing certain feelings to certain persons at work. However it should be in the context of a specific time and place. Having a heart to heart with your co-worker(s) of superior(s) is a very important thing to have available at your job. Especially for your own peace of mind.… Read more »
1
|
0
-   Share

Do the Seven Dwarfs count? As in many areas of life, common sense — and its bunkmate, moderation, go a long way — a very long way, in answering this question. Few people would want to either work or shop in a company staffed by automatons, but nor would they want to be involuntary participants in a group therapy session.

An appropriate level of passion and emotions are relevant and warranted, and can spark excitement. It is important for leaders to harness and manage it well.

Braintrust
"Leaders can’t afford to ignore tough emotions because happy workers are more productive and engaged than those who are struggling. "