Can Victoria’s Secret recover from its founder’s past relationship with Jeffrey Epstein? 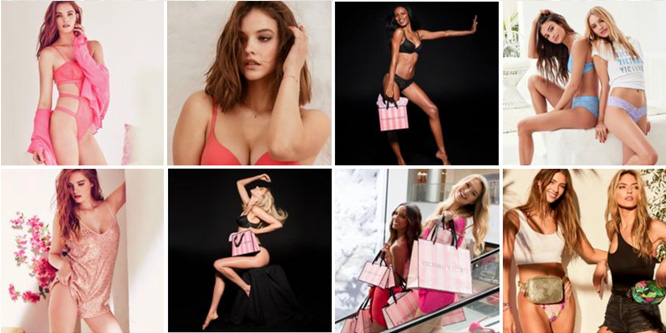 Victoria’s Secret has seen its share of the lingerie market slip in recent years as the retailer has faced criticism for its hyper-sexualized marketing and merchandising during a period in time when a growing number of women are demanding an end to gender discrimination, sexual harassment and abuse in their professional and personal lives.

Now, Victoria’s Secret is being urged by a group of more than 100 “Angels” who have modeled for the company to use its influence and power to curb such practices they say have been carried out in its name in the past.

In the letter to Victoria’ Secret CEO John Mehas, the group wrote:

“In the past few weeks, we have heard numerous allegations of sexual assault, alleged rape, and sex trafficking of models and aspiring models. While these allegations may not have been aimed at Victoria’s Secret directly, it is clear that your company has a crucial role to play in remedying the situation. From the headlines about L Brands CEO Leslie Wexner’s close friend and associate, Jeffrey Epstein, to the allegations of sexual misconduct by photographers Timur Emek, David Bellemere, and Greg Kadel, it is deeply disturbing that these men appear to have leveraged their working relationships with Victoria’s Secret to lure and abuse vulnerable girls.”

The signatories of the letter to the retailer are members of RESPECT, an anti-sexual harassment program designed by and for models.

“Every day, fashion brands, publishing companies, and agencies set the norms of what’s acceptable and what’s not in fashion. If Victoria’s Secret were to take a stand against these abuses and commit to meaningful change by joining the RESPECT Program, this would go a long way in helping our industry chart a new path forward.”

Mr. Wexner, the founder of Victoria’s Secret, has faced numerous questions about his past relationship with Mr. Epstein, who is currently facing charges of child sex trafficking. Mr. Epstein, who at one time managed the personal finances of Mr. Wexner, is alleged to have misappropriated $46 million from the L Brands CEO and his family.

In a letter to his charitable Wexner Founder Community, the L Brands CEO expressed embarrassment of having been deceived by Mr. Epstein. “I know now that my trust in him was grossly misplaced and I deeply regret having ever crossed his path,” Mr. Wexner wrote.

Victoria’s Secret has maintained that the personal and business relationship between the two men never had anything to do with its business.

DISCUSSION QUESTIONS: How would you respond to the RESPECT letter if you were the CEO of Victoria’s Secret? What else must Victoria’s Secret do now to get past the current bad press surrounding the company and widespread view that it is out of step with the times?

Please practice The RetailWire Golden Rule when submitting your comments.
Braintrust
"VSS/L Brands obviously is not used to 'crisis/reputation management,' but they’d better get on with that. In the 21st century, that’s just part of the gig. "

"Sexual discrimination is not sexy anymore. Inclusion and social responsibility are. Why not make a big splash and make some lemonade out of this?"

"The company’s core problem is the loss of relevance when shoppers prefer more sport-inspired styles."

15 Comments on "Can Victoria’s Secret recover from its founder’s past relationship with Jeffrey Epstein?"

VSS/L Brands obviously is not used to “crisis/reputation management,” but they’d better get on with that. In the 21st century, that’s just part of the gig — someone’s always got some dirt or opinion of you (right or wrong, doesn’t matter) and managing both ends of intrusions from the netherworld is critical. C’mon Les, we know you didn’t think it was always going to be a bed of roses!

That relationship sounds more like a symptom than a cause of the issues at VS. The problem has long been that Millennial (and younger) consumers have moved on from sex and objectification when it comes to their lingerie choices and VS has not. A coincidence that this is becoming a crisis-level issue for VS? I don’t think so.

Culture starts at the top. One-off issues can be dismissed. A pattern of behavior is much more difficult to do the same.

Yes, Nikki, I do not see this as a crisis management issue but rather a get with the times wake up call. To stay relevant, retailers must always know their customers. It would appear by the numbers that VS has been letting this slip. Time to get with the program. For my 2 cents.

I’m with Nikki on this. The VS Fashion Show was once a supermodel-maker. While model exploitation and sexual harassment/discrimination isn’t a new thing, nowadays it’s a lot harder for companies to hide shady practices (and relationships) behind smokescreens made of money.

And Victoria’s Secret? It’s starting to look a lot more like an uncomfortable relic of retail’s past than a trailblazing brand that consumers can rally behind.

Old leopards don’t change their spots. A man who once summed up his merchandising philosophy by saying “All women want to get l__d” is not going to turn around and suddenly get woke.

Truth be told, VS had problems long before this, and to presume that their only problem is bad press associated with Epstein and a RESPECT response is naive. That’s the top of a very large iceberg.

This is not Victoria’s Secret’s time. Women are in a different place, and VS probably should adjust its offering and its marketing to be more inclusive. I don’t think Wexner can do it, but I can only hope his company will try.

You’re right about women and Victoria’s Secret being in separate places. I was at the mall yesterday and noticed the VS store there had changed locations and had a new high end boutique feel, more Agent Provocateur than Aerie. The new fall collection is kind of dominatrix-lite. Not what I would expect our local teenagers to be sporting, but then again, I did watch HBO’s Euphoria…

The response depends on whether there was actually illicit behavior on the part of Wexner, the photographers in question, or other Victoria’s Secret staffers. If there was not, you say so and express your disappointment in Epstein and the rest. If there was, you can either fess up and go hide for the rest of your life with your millions, or you deny, deny, deny, deny. I would have thought that Les Wexner was a better man than is alleged. I hope I am right.

I don’t find Victoria’s Secret’s issues to be related whatsoever to Wexner’s past relationship with anyone. However, the broader (and awful) claims made in the letter add insult to injury for a brand attempting to regain relevance and social equity.

We are living in a world where being friendly with certain people can be damaging to a career and/or a business. I read about the relationship between Epstein and Mr. Wexner years ago. It didn’t seem to affect him then and I doubt it will now. But Victoria’s Secret and L Brands have a bigger problem than that. They need to listen to what women and the public in general is saying about the exploitation of women and sex. L Brands’ competition is making it difficult on them. They have to find a way to compete with those not serving sex and beating them at the cash register.

VS has been out of step with the fashion trends of younger buyers. The annual VS special will not be broadcast this year. The ratings over the last 10 years have plummeted. Their story is no longer one that anyone is buying.

And I am not talking about style. I am taking about message. Unfortunately, the Wexler/Epstein scandal just confirms the mindset (true or not) of a company that is out of step with the times.

Lingerie is an image thing. This is no longer a successful image.

Most consumers don’t know or care who Leslie Wexner is, but the “Epstein Connection” doesn’t help matters when VS is already dealing with cultural issues and worse. The company’s core problem is the loss of relevance when shoppers prefer more sport-inspired styles. But this round of bad PR makes the brand image of VS feel even more off-key.

This once-powerful brand is exploding in real time.

All this controversy comes amid increasing empowerment, as women are taking their business to more female-friendly brands, ranging from affordable ASOS to swanky La Perla.

To start improving its reputation, Victoria’s Secret can:

Yes. This is not a case of bad press but one where the CEO was personally taken advantage of by a pedophile. At no time does having $46 million of your personal monies stolen by a convicted sex offender equate to your aligning yourself with them. That Mr. Wexner had Jeffrey Epstein steal $46 million from him should be enough. Now he has to go through more public embarrassment, and shame, by having thoughtless organizations align him with Jeffrey Epstein is a gross abuse of power and frankly, sounds alot like blackmail (he has to join their organization?). How does joining an organization change the fact that Jeffrey Epstein stole money from him? Wexner made a personal, financial mistake that has nothing to do with RESPECT nor the fact that RESPECT was not even around when this was done. Finally, hearsay allegations, are not necessarily true and should be treated as such until they are proven. Shame on RESPECT for reacting and demanding these actions until they have been proven true. Demanding that Wexner join… Read more »
1
|
-2
-   Share

Interesting opportunity for Wexler to do good for society and his brand in one fell swoop. Fork in the road for Victoria’s Secret. Sexual discrimination is not sexy anymore. Inclusion and social responsibility are. Why not make a big splash and make some lemonade out of this?

The letter (for those who found it, the link didn’t work on my try) is rather vague: “there’ve been allegations,” “take meaningful action,” etc. And to be quite honest, at this point I think this is an industry-level issue that few people (i.e. customers) have been alerted to (though admittedly I don’t follow fashion news, so perhaps there’s publicity of which I’m unaware).

Certainly Victoria’s Secret shouldn’t tolerate misconduct, but it risks fanning the flames if it publicizes that it does nothing wrong … “methinks the CEO doth protest too much” is likely to be a reaction from people (previously) unaware of the issue.

Braintrust
"VSS/L Brands obviously is not used to 'crisis/reputation management,' but they’d better get on with that. In the 21st century, that’s just part of the gig. "

"Sexual discrimination is not sexy anymore. Inclusion and social responsibility are. Why not make a big splash and make some lemonade out of this?"

"The company’s core problem is the loss of relevance when shoppers prefer more sport-inspired styles."