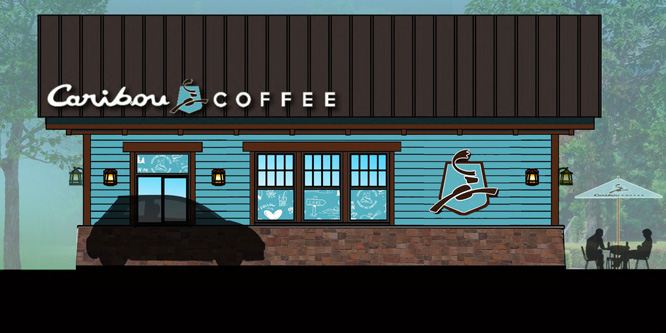 Coffee shops in the U.S. are established as places to work, to read or just to hang out and talk — so much so that Starbucks started referring to itself as a “third place” away from home or the office some time ago. Starbucks’ competitor Caribou Coffee, however, is now launching a concept that caters exclusively to the other side of the coffee-drinking spectrum — customers who don’t want to stick around.

The small-format stores, called Caribou Cabins, have drive-thru windows and walk-up service counters so people can place and receive their orders, but no interior seating. The company said in a statement, “Caribou Cabins capture the brand’s iconic Northwoods feel that guests love, and are designed to deliver on guest convenience, speed, and efficiency. Perfect for fueling life’s everyday adventures…fast!”

The new concept will begin its rollout with five stores in Minnesota, and is the brainchild of John Butcher, who has been the chain’s CEO for two years. The Caribou Cabins concept comes as part of a larger expansion of main-line locations.

The Caribou Coffee website currently lists 455 locations in the U.S., 288 of which are in Minnesota.

Caribou Coffee’s larger competitors, also including U.K.-based Costa Coffee and McCafe, have been trying to better meet the needs of the grab-it-and-go crowd, as well.

Last year, Starbucks announced that it would boost its drive-thru experience by opening a serious of drive-thru only locations without indoor seating throughout the U.S., according to Consumer Affairs.

Starbucks’ drive-thru experience and mobile ordering in some ways became casualties of the chain’s success, growing so popular that customers began to experience frustrating bottlenecks at peak hours. This led the chain to open a mobile pay-only location at its headquarters in Seattle in 2017.

Caribou Coffee isn’t the only distant competition that Starbucks might want to keep an eye on in the rearview mirror. Both Dunkin’ Donuts and Tim Hortons have been experimenting with drive-thru concepts.

DISCUSSION QUESTIONS: How would you rate the pros and cons of a no-seating coffee concept such as Caribou Cabins? What do you think of the expansion potential?

"The key to success will be putting Cabins in optimal locations and executing without a hitch!"

"Caribou is barely a blip on Starbucks’ radar. McDonald’s is way more of a threat and they’re equipped with a drive-thru."

Caribou has huge expansion potential with their small footprint, low-overhead model. Starbucks is focused on the experience and they’re winning there. Caribou is capitalizing on the opportunity they see in the functional space. Not to mention, Caribou has significantly gained in the hospitality market (think in-room hotel coffee options) over the past 18 months.

I think there is a time and a place for both grab-and-go only locations and extended stay options. As long as the customer gets the appropriate messaging as to what the location offers, I think this makes sense. Store segmentation to match customer and trip type/occasion segmentation.

Our coffee-addicted culture certainly has the capacity for a fleet of Caribou caffeine cabins. Strip malls, gas stations and convenience stores in every corner of the country are populated with kiosks and carafes of mediocre coffee catering to people who want to grab their coffee on the fly. Adding higher-quality coffee to the mix will likely test the price elasticity of convenience, but I am guessing there is plenty of market opportunity percolating there.

The concept is a good one, but Caribou is handicapped by its lack of locations outside of Minnesota. (It closed its stores here in Wisconsin, and recently reintroduced the brand in its sites co-branded with sister company Einstein Bagels.) Elsewhere in the country, the Peet’s Coffee brand (another JAB subsidiary) may offer faster growth potential.

But — if the idea works — don’t forget that Starbucks has the resources and footprint to roll out a concept like this very quickly. If Starbucks ever runs out of sites for its full-line stores, an idea like this could have a big impact.

That’s funny, “rearview mirror.” Starbucks has approximate 37,000 units to Caribou’s 600 (200 outside of the U.S.). Besides, Starbucks has had drive-thru only stores for years. There’s a double drive through Starbucks about a mile from my house. Also, the Starbucks app pickup and go puts a pretty big damper on the idea of drive-thru only, unless parking is an issue. That feature is just great, and you have the option of staying.

Caribou is barely a blip on Starbucks’ radar. McDonald’s is way more of a threat and they’re equipped with a drive-thru. Caribou was exceptional when they built premium spaces as a cool place for adults to have alone time or meetings or whatever, but that idea, ownership and opportunity to compete are all long gone.

We are faced with an overwhelming number of coffee companies and perhaps Caribou is a bit late to the game. Starbucks is omnipresent in every shopping center, mall, airport and now in hotels. I highly doubt that Caribou is a concern for the Seattle coffee giant.

Starbucks is not only contending with the Dunkin’ donuts, McDonald’s, Tim Hortons etc., but now the emergence of the sustainable, higher quality coffee organic startups like Bluestone Lane, La Colombe, and others. The Starbucks brand has become synonymous with coffee and it will be a difficult task to take them off their throne.

I utilize Starbucks’ drive-thru early in the morning on most days. It is busy at 6 a.m. Every time we are in Southern California with a rental car, I stop in one of many drive-thru only locations, and early in the morning they are lined-up. But later in the day, they look like a closed business. Starbucks is on the track of understanding both hurried customers and the visitors during the day. To me, that seems to be the right combination.

This is not a Starbucks issue. The Starbucks brand is not drive-thru. They are two different business models. Caribou has picked a niche that fits it. But the more likely competition for Caribou is McDonald’s or Dunkin’ and the grab-and-go concept.

I grew up in Minnesota and would have very much appreciated getting my Caribou Coffee from a warm car. The key to success will be putting Cabins in optimal locations and executing without a hitch!

The best way to compete with a gorilla-sized competitor is simply not to compete — carve out a different niche. Caribou is doing just that with this new drive-thru/walk-up concept. Starbucks is a destination, and while they certainly have drive-thrus, Caribou is unlikely to be a tangible threat to them at this time or in the near future. I’d say Caribou has plenty of potential growth if they find the right locations for this concept, both in urban and suburban areas. Picture a parent on their way to their children’s soccer practice passing through a Caribou Cabin for a quick coffee. I look forward to seeing this concept grow!

Interestingly enough, just finished reading an interview with Tom Butcher on how he is looking to grow Caribou. He is looking at doing a lot more than just open Caribou Cabins.

I feel his main focus on guest experience and making it every employee’s job to make every customer’s day a little better can be a winning strategy — if he can pull it off.

"The key to success will be putting Cabins in optimal locations and executing without a hitch!"

"Caribou is barely a blip on Starbucks’ radar. McDonald’s is way more of a threat and they’re equipped with a drive-thru."