Coca-Cola to take a run at Starbucks 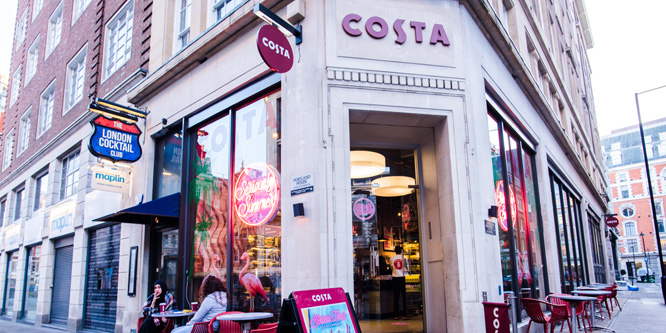 Marking its biggest acquisition ever and first step into retailing, Coca-Cola announced plans to plunk down $5.1 billion to acquire Costa Limited, the third-largest player in coffee retail, well behind Starbucks and just behind McDonald’s.

In prepared remarks, CEO James Quincey said the acquisition will give Coca-Cola a global brand in hot beverages in the “fast-growing, on-trend” coffee category. Expanding at a six percent annual clip, coffee offers a wide range of opportunities to expand, including:

Costa, with a foothold in all these areas, is expected to benefit from Coca-Cola’s vast distribution network.

Coffee is also “remarkably fragmented,” according to Mr. Quincey, with no single company operating across all formats globally. Coca-Cola currently sells Dunkin’ Donuts’ bottled coffee in the U.S. and ready-to-drink Georgia coffee in Japan.

“And yes, it’s a great brand,” added Mr. Quincey. “I know many people aren’t familiar with Costa, especially if they live in North and South America, where Costa isn’t part of the marketplace. But Costa has a deep heritage, especially in its home market of the UK, where it is the leading coffee company.”

Asia, where Costa has about 450 stores in China, may present one of the biggest growth opportunities, should coffee become trendy in the region. In markets such as the U.S. that have many coffee shops, Coca-Cola’s opportunity overall is being able to offer “total beverage solutions” to existing customers.

“In the end, this is a coffee strategy, not a retail strategy. And so, there is opportunity for great value-creation through the combination of Costa’s capabilities and Coca-Cola’s marketing expertise and global reach,” said Mr. Quincey.

The coffee category saw a good deal of consolidation this year, including Nestlé SA’s acquisition of the rights to sell Starbucks across retail; JAB, the parent of Krispy Kreme and Peet’s Coffee, acquiring Pret A Manger; and Dr Pepper Snapple buying Keurig.

DISCUSSION QUESTIONS: What will Coca-Cola bring to the coffee category? Is its entry into retail a big deal?

Please practice The RetailWire Golden Rule when submitting your comments.
Braintrust
"For anyone operating in this category or lulled into a false sense of security, it’s time to wake up and smell the coffee."

"In a world where distribution and possession of the customer is everything, this was a long time coming for a company like Coca-Cola..."

"I want to see how Coke tackles moving into selling from its own spaces and the challenges this brings."

19 Comments on "Coca-Cola to take a run at Starbucks"

This is a tremendously big deal for a very fragmented – and high growth – category. I believe Coca-Cola will bring product innovation, branding excellence, and bountiful imagination to coffee enthusiasts around the globe.

For anyone operating in this category or lulled into a false sense of security, it’s time to wake up and smell the coffee.

We are witnessing the commoditization of the coffee industry. Starbucks has established a repeatable, scalable and far-reaching global model with their branding and coffee supply chain capabilities. Coca-Cola could certainly capitalize on Costa’s competitive geographic advantages in both the U.K. and Asia. As a diversification strategy, this is a wise move for the Atlanta-based soda giant.

However as Coca-Cola seeks to expand Costa’s reach into the states and elsewhere, the question remains of how to differentiate the coffee brand from the ubiquitous and dominant Starbucks company. Perhaps, there is an opportunity for Coca-Cola to diversify their offerings from just soda, water and juice products, so why not a coffee house?

Having a DTC retail space is a significant move. Coca-Cola would be wise to leverage ethical and socially conscious practices when sourcing their coffee beans. This resonates so well with today’s coffee consumer.

This is a massive deal for Coca-Cola and the coffee sector. There is an opportunity to globalize Costa, which I am sure Coke will do by opening more coffee shops. However, there is also a big opportunity to push the brand into new products in supermarkets and other outlets. In short, Costa is a solid brand that is now married to a company with massive financial and logistical muscle: that’s bad news for Starbucks and other coffee brands.

I’m sure Coca-Cola is considering that awareness and familiarity is not ubiquitous for Costa so they think there is low hanging fruit. Also, Coke can get retail distribution following the Starbucks formula. I also think they realize that they need to go beyond cold beverages and penetrate the morning daypart. The thing I DON’T like so much is that this is a knock-off brand (Starbucks got there first) so it will be a challenge for them to achieve the category dominance they are used to.

This acquisition is very well aligned for Coke. It compliments rather than compromises existing product lines and gives Coca-Cola broader reach into beverage consumption. Costa just acquired access to a well-honed market/culture data-rich mentor that can help provide entry and localization guidance for global expansion plans. In the U.S., it likely will be a head-to-head battle with Starbucks where the biggest advantage will be Coke’s deep pockets.

This is a big deal, and one that will be followed in the months and years to come by P&G and other CPG players. In a world where distribution and possession of the customer is everything, this was a long time coming for a company like Coca-Cola, and just the beginning of large acquisitions of retailers with large and diverse physical footprints to own physical distribution.

The Coca-Cola global marketing juggernaut will be brought to bear. While more health conscience consumers turn away from sugary soft drinks the broader beverage market thrives. This helps Coke diversify its portfolio while still staying within its comfort zone. Costa benefits from the global recognition and marketing horsepower Coke brings to bear. This is a great acquisition and provides yet another option competitive with Starbucks.

This can be a big win for Costa. But Coca-Cola is going to have to work hard and fast to make it a win for them. I can see Coke bringing Costa to areas such as gas stations and on-the-go grocers. That is a big plus for Costa.

Make no mistake. This is a big deal and worth watching. The Costa deal will bring great challenges as well as opportunities for Coca-Cola. Opportunities: new growth channels, a new retail footprint and international expansion. Challenges: operating a retail business, customer/channel conflicts (I’m sure McDonald’s won’t like a supplier becoming a competitor) and heavy competition. A big bet for sure.

Strategically, I love this. The big challenge is that it is not soft drinks in retail stores, it is operating a business that is face-to-face with customers.

One wonders how much this was pushed forward by the Nestle/Starbucks alliance.

This could be said about both brands: it’s not just the coffee.

Coke’s brand is slightly denigrated due to the mass realization that they’ve been selling us something that’s bad for us for 100 years. Not true for Starbucks. Starbucks has great restaurants that they made into “third places”. Not true for Coke.

So it’s apples to oranges to me — Coke will compete more with McDonald’s than Starbucks, in my opinion — in the coffee realm that is.

Like everyone I think this is big news. Coca-Cola is an absolute giant and it has a tonne of resources and experience at its back. Costa isn’t as well known as Starbucks in Coke’s home market, granted, but this is a real opportunity for the brand to grow. I want to see how Coke tackles moving into selling from its own spaces and the challenges this brings. It will also be interesting to see how this impacts its existing relationships with certain players. At the same time it could give it a really solid proposition in being able to sell complete drinks packages. I’ll be watching with interest.

With Coca-Cola’s global reach, distribution and innovation thinking, their entry into retail is a big deal. It changes the coffee business landscape overnight and it’s also another signal emphasizing store footprints that impacts all retail verticals. Will be interesting to watch how competition responds.

Coca-Cola brings brand, global presence, and global operational excellence. It’s definitely a big deal for coffee, Costa is a $5.1B deal, no small change — and complementary for Coca-Cola’s list of beverages as well. It’s come a long way since Far Coast. The transition from CPG to retailer is a big step, but Quincey (CEO) says it’s really about getting into hot beverages and the coffee market, not retail market.

Outside of the UK, Costa is a niche both small and largely unknown. Coke is struggling with sagging sales and is going nowhere soon with this purchase. The big boys in this market are gas-and-goes and fast foodies. Interesting enough, they too are shrinking markets. A better quest for the sweet stuff is to somehow find a sugar and or sweet free flavor that is new and exciting. That would only require creativity and work along with some functional market research and testing.

Braintrust
"For anyone operating in this category or lulled into a false sense of security, it’s time to wake up and smell the coffee."

"In a world where distribution and possession of the customer is everything, this was a long time coming for a company like Coca-Cola..."

"I want to see how Coke tackles moving into selling from its own spaces and the challenges this brings."