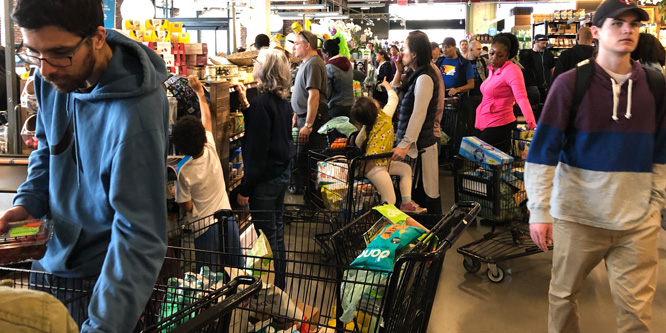 For all the talk about the changing consumer shopping and buying behavior, it turns out that Millennials and other consumers aren’t all that much different than past generations. They just don’t have as much disposable income, according to a new report by Deloitte.

According to the research, which included a survey of more than 4,000 consumers as well as an analysis of government and spending data, the net worth of consumers under the age of 35 has fallen by 34 percent since 1996. The cost of student debt today is 160 percent higher than it was in 2004. Deloitte found that while consumer spending at retail has increased about 13 percent since 2005, per capita spending has remained flat for much of that time. In short, retail sales gains are largely due to a growing population.

When it comes to purchases, these consumers are essentially spending the same percentage on discretionary and non-discretionary categories — alcohol, entertainment, food (at-home and outside) and housing — as previous generations.

Even as similarities between today’s consumers with older generations is made clear in Deloitte’s research, the once popular brand testing question — “Will it play in Peoria?” — no longer holds the same relevance as way back when. The reason is the growing diversity in the U.S. population. While race is part of the equation, diversity also speaks to differences based on education, income and whether individuals live in an urban, suburban or rural environment. These “economic, demographic and cultural factors,” according to Deloitte, “are turning traditional retail and consumer products sectors on their heads.”

So where have spending changes taken place?

One significant area of change is healthcare where consumers today are spending more than in the past. Part of this is due to two facts: consumers are living longer than in the past, even though simultaneously being less healthy at the same time. The research points to life expectancy rates, which have risen by an average of 2.5 years, while the percentage of overweight and obese people has jumped from 22 percent in 1994 to 42 percent today.

Two other categories — clothing and mobile communications — point to other changes in spending by American consumers. The percentage of spending on apparel has fallen from five percent in  1987 to two percent at present. Spending on mobile device and call/data plans is an expense that has largely grown over the past decade with the popularity of smartphones.

"There clearly are differences between age segments -- these tend to manifest themselves in the way people shop and not in terms of what they buy."

"The biggest change for retailers is switching from mass merchandising to marketing to a unit of one. "

The most startling to everyone in retail has to be the ability to rent anything at any time and have it come to you. As Boomers opt out from buying the latest in clothing, cars, appliances, etc. retailers will be looking to Millennials to pick up the slack but clearly they don’t need to own as much as rent.

What I see as most significant is not a change. I believe that perceived value is still the driving force behind at least half the purchases. While Millennials may not buy automobiles like their parents did, they will pay a premium price for a premium liquor drink.

Retailers tend to fight last year’s battle — a common mindset is, “We sold this product/category last year, we need to sell more this year.” Managing to a product life cycle should make retailers be more forward-looking, and improve their ability to provide more localized assortments. This is especially true of apparel retailers — which helps explain the doldrums at your local mall.

Tech adoption has skyrocketed with consumers. Gen X, Millennials and Gen Z are naturals at tech, and use it in their shopping. Hence the potential for m-commerce. Frankly it is already here, as so many shoppers use their smartphone in-store to price check, shop around, and read up on features/capabilities/benefits/patterns…

I agree with Bob that rentals are the next big boom. I wonder if we won’t soon be in a world where half of your clothes are owned (the basics) and half rented (within 10 years).

There have been many changes in the generations. The one that stands out the most is employment. Those from past generations were expected to work for a company their whole career. Changing jobs was not typical. If they worked their way up the corporate ladder that was a tremendous accomplishment, but they did so for one company and stayed there until retirement. This pattern also was consistent with young married couples buying their first home staying there until one or both passed away. Today it is entirely the opposite. Many companies frown upon job applicants who have remained at a company too long feeling that they have outlived their usefulness with ideas and productivity. Too long for some HR directors is more than five years. Moreover, because of the changing jobs for advancement, tremendous relocating needs are causing those young married couples to purchase many houses during their career. The point is that loyalty has changed and this is something too many retailers do not understand. If you are no longer loyal to your employer… Read more »
3
|
0
-   Share

Also, every study we’ve done over the last 10 years has shown significant differences in just about everything when it comes to digital natives (29 and under) and digital immigrants (over 45) — significant. Especially regarding acceptance and willingness to try new concepts. That alone tells us that digital natives want more new things to try more often, not the same old, same old stores in a mall, for example. A fail fast strategy then comes to mind.

Agreed. There’s nothing more disappointing than traveling to a new locale for business, checking out the retail and finding the exact same stuff you can find at home. Everybody wants more, digital natives are just hungrier.

Historically retailers relied on segmentation by demographics, and especially by age cohort. We have entered the consumer era with increasing requirements for individualized personalization. The biggest change for retailers is switching from mass merchandising to marketing to a unit of one. Success now requires building relationships with individuals on their terms.

There clearly are differences between age segments; there always have been and there always will be. However, these tend to manifest themselves in the way people shop and not in terms of what they buy.

In a lot of the work we have done, younger consumers are less materialistic than some of the older cohorts and they have different views on ownership versus renting. However, they are still engaged with (good) retail.

Noise, so much noise in the marketplace. Influencers, social media, rent this, free returns here, pick up at the store, tech-driven shopping. Are there enough hours in a day to list all the noise? Part of the noise is self-inflicted as retailers chase the next new tech-induced light at the end of the tunnel. Apparel sales falling by 3 percent since 1987 cannot be solely blamed on smartphones. Times have changed, very few consumers, especially Millennials chase fashion. Basic wardrobes of jeans, hoodies, t-shirts are the new normal at school and at work. Retailers must acknowledge the days of fashion for fashion’s sake are over. About five to seven years ago. Teens to 30 somethings have already abandoned fashion. Old news. New news, fashion basics at retailers like Target, priced to be easy and fun to buy. A footnote rather than a book. This sea change is already cemented. Millennials will move into their 40s and beyond with the same “fashion” sensibilities. It is human nature, as people get older they move further into their… Read more »
2
|
0
-   Share

Technology spend has increased dramatically over the past two decades due to new product categories being created. That spend adds to the overall retail spend, yet typically creates no measurable net worth increase for the consumer. That equates to a ton of dollars with no tangible economic benefit.

Consumers will always continue to jump onto whatever trends are driving commerce in general, and agility will continue to be critical for retailers to adapt.

We wrote about this topic last year on our Retail Adventures blog. After all the focus groups and one on one consumer interviews, we’re beginning to think that maybe we are all not that different, and where we are different is technology based; the technology that was available to you when you were growing up has a big influence on you as an adult. Times change and stores change but our core values remain the same.

Every comment here has validity. Another aspect that is affecting retail, especially apparel, is the fact that we now have “hard working wardrobes,” which are working for both leisure and business. These subtle changes are challenging our best merchants to constantly tell better stories with better selections and presentations.

As the survey data indicates, health care and telecommunications spending has increased the most in the past 10-20 years, driven by not only the increased “need” but also the greater than average prices increases in these segments. The cost of smartphones and the corresponding data plans have increased dramatically, especially since it wasn’t even a category 20 years ago.

Another category that is hot and has no signs of changing anytime soon is off-price and dollar stores. If, or when, the economy cools off, this category will gain even more traction.

Another trend that we are seeing is a shift back to the store by generation Z … this is something we need to keep an eye on as the store isn’t dead, but morphing into something new.

There really isn’t much new news in this study. The big — seismic — changes that we as an industry are still grappling with have (far) less to do with how we spend and (much) more to do with how we shop. Share of wallet across categories is ever-shifting, and apparel definitely needs to adapt. But the way to adapt is entirely dependent upon each retailer’s ability to adapt to how people shop. People want to be offered highly relevant assortments that are available to them at the price points and locations that make the most sense for each unique journey. Master that, and they will come….

I believe this study is trying to tell us that what we buy hasn’t changed very much but how we buy it is always evolving and changing. There are definite differences by demographics, age groups, etc. in how we shop only to ultimately buy the same things — or as others have pointed out in some cases, rent. The rent vs own factor may be one of the most significant changes in recent years.

Another significant factor is convenience. Convenience has overtaken product and price as “king.” Consumers crave convenience and the more digitally savvy the consumer, the more they want convenience! These factors will only increase over the next few years. Retailers that focus on the convenience factor in how consumers shop will be the ones to win market share.

"There clearly are differences between age segments -- these tend to manifest themselves in the way people shop and not in terms of what they buy."

"The biggest change for retailers is switching from mass merchandising to marketing to a unit of one. "