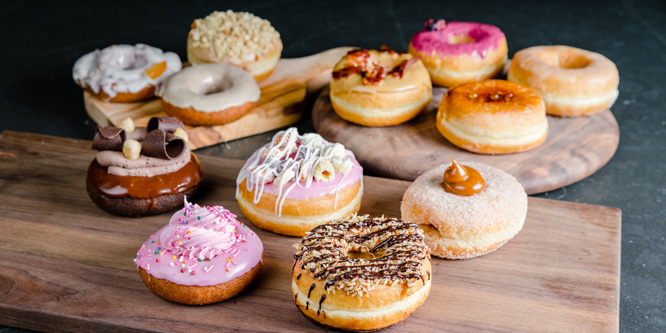 There’s something that feels classic and old-fashioned about the experience of getting coffee and a doughnut. That might be changing, though, as another doughnut chain begins experimenting with going gourmet and high-tech.

Canadian doughnut chain Tim Hortons has announced the launch of an “innovation cafe” in the space below its head office in downtown Toronto. The location will be used to test new tech initiatives and menu items for a potential broader rollout.

The cafe features a brew bar with seven different brewing options, seven different milk and milk alternative choices, drinks like “blueberry lavender lemonade” and a program that offers different single-source coffees available on a schedule. It features an enhanced doughnut selection with choices like crème brulee, maple bacon and blueberry hibiscus, as well as similarly foodie-focused sandwich and soup options.

The next-gen store design features a video wall, self-order kiosks, mobile charging at seating areas and a screen with information about the origins of the chain’s single-sourced coffee, along with other topical content.

The Tim Hortons innovation cafe comes a year after the announcement that major U.S. coffee and doughnut chain Dunkin’ was spiffing up its look and feel with a new digitally-upgraded concept store — presumably in part to compete with Starbucks.

Tim Hortons has not been able to reach the level of ubiquity in the U.S. that it has managed in Canada. The chain’s store count has fluctuated in the U.S. since its 2014 acquisition by the parent company of Burger King. The Tim Hortons website states that, as of 2014, the chain had 869 U.S. stores. A 2018 Bloomberg Canada report, however, stated that the chain closed 14 percent of its U.S. locations in a three-year period.

7-Eleven, like Tim Hortons, opened a test store in Dallas with an eye toward developing new strategies for the entire chain. The location features an in-store restaurant and other improvements not currently found in U.S. 7-Elevens.

DISCUSSION QUESTIONS: Are labs like Tim Hortons innovation cafe overkill for mass retailers/QSR chains or is it good to invest in these sorts of experiments? Do you expect to see much of what gets tested in the innovation cafe rolled out into Tim Horton’s stores?

Please practice The RetailWire Golden Rule when submitting your comments.
Braintrust
"One of the great benefits of an innovation café is that you can quickly learn what won’t work. It’s the nay’s that save companies wasted dollars."

"There are learnings from fast food restaurants that average ticket size is higher from kiosks because there is consistency in the upsell process..."

"To me this is like Dollar Tree experimenting with luxury goods. Sometimes you just have to let things be what they are."

12 Comments on "Does Tim Hortons need an innovation cafe?"

Can we think of a chain that has ever executed a lab-based retail concept? I’m having a hard time imagining any U.S. chain doing the makeover this lab would require on a store-by-store basis. If true, this would suggest that labs may help its corporate image, both internally and externally, but it’s not going to do much for the company itself.

While classic items always do well, foodservice customers want new things to try. This is important to drive footfall and to differentiate. I think Tim Hortons’ approach is sensible as it gives them a testing ground where they can develop new items, services and so forth. Innovation is the lifeblood of retail, so anything that facilitates that is a positive thing!

One of the first stops in a visit to Canada is Timmie’s for a double-double and some timbits. It’s a classic. But that quick stop for coffee and doughnuts is changing.

The sign at Krispy Kreme lets customers know when the doughnuts are HOT; Dunkin’ is reinventing its brand, and a visit to Voodoo Doughnuts is off the charts. Want to get married at Voodoo? By a space alien? It’s on the menu. Even the doughnut world is realizing it can’t continue to sell like a commodity when it’s all about the experience. So does Tim Hortons need an innovation cafe? Why not?

While “overkill” is an oxymoron, yes, this is overkill. Even as someone who knows where he was when Tim Horton died in the car accident on the QEW, I’ve never really understood the loyalty to Tim’s. I may need to give up my Canadian citizenship but the truth is the coffee is ordinary (and I hate paying for a second cup) and the doughnuts are small and expensive. Nevertheless, it is a Canadian icon that can be easily destroyed by “innovation.”

To me this is like Dollar Tree experimenting with luxury goods. Sometimes you just have to let things be what they are.

As an American visiting Canada, I was shaken by the loyalty and obsession with the Tim Hortons brand. There’s nothing that the company could do wrong as every single Canadian airport and city cafe’s lines were around the corner. The coffee is nothing extraordinary, yet they have captured magic in a bottle somehow and their fans come back for more.

They must be doing something right? What do you think Ian?

The answer is “Because it’s Canadian!” Canada is given little credit for how it has changed the world – everything from basketball to the telephone to insulin to sonar to the radio. Ahhhh … but Tim Hortons is in a league of its own. A close second only to hockey. On almost literally every corner. Started in 1964, seven (7) years before Starbucks was even on the drawing board. It is proudly part of the national identity forever — IMHO, it really is not about the coffee, it’s about our home and native land, true patriot love and glowing hearts!

Innovation and willingness to change and adapt are the lifeblood of retailers, brands and service providers. In today’s consumer insight-driven world, the Tim Hortons innovation cafe is exactly what the brand needs to understand what their core customers want.

Their proven cafe model works just fine now, however there is an issue with remaining stagnant and never adapting. We all know how that turns out. Just as Starbucks has accomplished with their new model stores and Roastery experiential centers, Tim Hortons should absolutely fully leverage this testing ground to drive new experiences, test and evaluate new product offerings, and learn from what is not working.

One of the great benefits of an innovation café is that you can quickly learn what won’t work. It’s the nay’s that save companies wasted dollars. As for the ideas that seem to have merit: How good is good? Well that takes a bit more investment. But at least there’s a reason to push forward.

If the doughnuts are fresh I am all for it. I am astounded by the doughnuts people find acceptable at Tim Hortons (I’m only speaking of the U.S. experience) or especially at Dunkin’ Donuts.

You are so right Gene. A doughnut is a sacred thing, a work of art, to be handled like a fine wine. The only place I’ve found truly worthy doughnuts is in a small variety store called “Reggie’s 8-12” in Rocky Point, Mexico where they are made on location – four hours drive straight south of Phoenix and worth every agonizing mile. One apple fritter could serve a family of four.

The use of technology can only help retailers in the long run. Starbucks has done an exemplary job of using their loyalty program and point reward system to brickwall customers. There are learnings from fast food restaurants that average ticket size is higher from kiosks because there is consistency in the upsell process (e.g. standard push for a drink can be variable when talking to someone live).

One of the biggest drivers of spending time at a cafe – access to power plugs and strong wifi. Additionally, Tim Horton’s can use the store to test new menu items and be confident in their success the board.

I’m not sure how much we’ll see the ideas from the innovation cafe rolled out into other Tim Hortons stores, but maybe that’s only part of the equation. Creating a space like this is surely about creating buzz — more of a destination space if you will. Like Starbucks’ Reserve spaces, it’s about giving people a reason to seek the store out. That it’s also a place to test new ideas is a good use of the real estate.

There’s no better way to know what customers like than testing it with them. I had read that they were going to use the store to test new sustainability initiatives as well, which we may then see rolled out more widely.

Is this space strictly necessary? Maybe not. But it’s also giving loyal Tim Hortons customers something a little bit different to visit.

Braintrust
"One of the great benefits of an innovation café is that you can quickly learn what won’t work. It’s the nay’s that save companies wasted dollars."

"There are learnings from fast food restaurants that average ticket size is higher from kiosks because there is consistency in the upsell process..."

"To me this is like Dollar Tree experimenting with luxury goods. Sometimes you just have to let things be what they are."