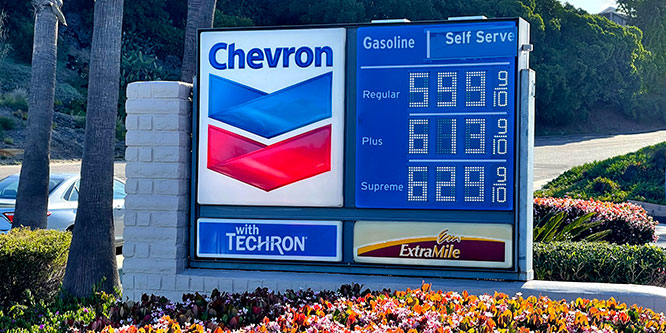 A new study indicates that retailers are taking a hit in foot traffic across the board due to fuel cost inflation.

While consumers had not been changing their shopping habits much in response to inflation up until early March, gas prices now seem to be influencing shoppers to avoid visiting stores. As gas prices continue to rise there is an expectation that it will continue to suppress retail foot traffic, especially among lower income consumers.

Grocery, supercenters and discount/dollar stores are all experiencing drop-offs in foot traffic. The only current winner appears to be Costco, which is doubly well positioned, due to its cheap gas prices and potential to let customers consolidate grocery visits.

Other verticals are experiencing issues, as well.

Electronics retailer Best Buy reported a year-over-year downturn in foot traffic in March, according to Investor Place. The retailer’s stock dropped in response to the traffic decline, as analysts look for bellwethers of a drop-off in discretionary spending.

Throughout the pandemic, store foot traffic has fluctuated as waves of infection have ebbed and flowed. Early on, many anticipated that customers would rush back to stores at the first sign of the virus waning, though the rebound caused by the Delta and Omicron variants led to the reinstatement of some mitigation policies and led some customers to again avoid public places.

Prior to the last month, however, some operators saw foot traffic bouncing back. During the 2021 holiday season, while some sources reported a sales decline attributed to inflation and the beginning of the Omicron surge in the U.S., Jason Goldberg wrote in Forbes that this position was “completely wrong,” and pointed to the return of normal retail foot traffic as compared to 2019 numbers.

DISCUSSION QUESTIONS: Do you think that foot traffic to stores will continue to slow due to fuel costs and other inflationary pressures? What can retailers do about it?

Please practice The RetailWire Golden Rule when submitting your comments.
Braintrust
"If there is a positive side to higher fuel costs, it’s that shoppers are more invested in one-stop shopping and getting more items crossed off the list during each visit."

"At nearly 8 percent and wage increases for most Americans at or below 3 percent, it’s no wonder foot traffic is falling in most retailers."

"The average U.S. household is now paying over $5,000 more per year YOY for the same goods and services. This will impact discretionary income."

Yes. There is a direct correlation between gas prices and foot traffic. The inflation rates are also hitting e-commerce, so retail overall. Focusing on core basic SKUs as consumers pull back on discretionary spending is key. We are primed for a recession, so this will likely need to be a long term strategy.

If there is a positive side to higher fuel costs, it’s that shoppers are more invested in one-stop shopping and getting more items crossed off the list during each visit. This benefits multi-category retailers and challenges category killers like Best Buy.

Anyone that lived through the gas crises of the 1970s remembers the impact of energy prices on daily life. Gas prices and scarcity made us more thoughtful about how and when we used our cars – for commuting, for travel, and for shopping. Foot traffic to stores will undoubtedly be reduced, but it may be less directly observable coming on the heels of the pandemic, which also kept shoppers out of stores.

Consumers have learned new ways to shop during the pandemic, including delivery and BOPIS. These have become permanent shopping journeys for many people, but they are fall-back behaviors for those who would actually prefer to shop in-store. Now that Walmart Plus is offering delivery, that monthly fee will likely be cheaper than driving to the store and back.

Inflation is taking a huge bite out of the discretionary income for the average U.S. consumer. At nearly 8 percent and wage increases for most Americans at or below 3 percent, it’s no wonder foot traffic is falling in most retailers. Couple this with falling consumer confidence in the economy and you have a recipe for retreat. It gives me no joy in saying this, but I don’t see this abating any time soon and believe it will persist well into 2023. Retailers ought to highlight value packages where shoppers can save money. This might include in-house or private label brands or new trade promotions that offer incredible savings.

It’s not only gas lowering footfalls, they’ve been dropping for 20 years. The bump from being locked up for two years is over, especially since most retailers didn’t really change anything. Boy, gas prices are the new excuse du jour, eh?

On the glass is half full note: I read something by Thomas Friedman years ago saying, “you want to get electric vehicles going? Make gas 10 bucks a gallon.” Turns out he was right, as Google searches for EVs hit an all time high last week.

The pandemic changed shopping habits permanently. Or more clearly accelerated the changes. Carol and Liz point that out very well.

Of the inflationary pressure, fuel is by far the leading factor for all. Gasoline is up almost 40 percent from last year and just 13 percent in the last week. The cost of filling the tank for those SUVs has increased $80-plus. This alone causes heavy financial pressure on households. Considering overall inflation is about 7 percent to 8 percent, fuel alone represents about one-third of that percentage.

Shoppers will get used to product inflation. The year-over-year increases in salaries are up more than they have been in decades, with the average greater than the inflation number. And for the first time in 40 years, the increases are coming at the bottom.

In a word, “yes.” As long as gas prices stay high, consumers will continue to “transfer” fuel costs to retailers. So, it is incumbent on retailers to get more efficient in terms of their delivery services, consolidate routes, etc.

No doubt the higher fuel costs are causing consumers to drive less, which obviously impacts local trips to the store. I don’t think that will deter people from typical spending, as delivery has become easy, convenient, and is a normal way of doing business. I think you’ll also see other areas of inflation forcing consumers to cut spending. It’s traditional economics.

What can retailers do? Be smart about inventory. Personalize marketing to ensure you are promoting exactly what the customer wants. Be prepared to balance online and in-store as we move into a new era of economics.

Maybe we’re the outlier, but I’m not seeing it in southeast Florida. Growth and development are rampant everywhere. Shopping centers are going up in many places, homes are being built in mass in places that were supposed to be nature preserves, and traffic is as heavy or heavier than I ever recall. Shopping center parking lots are busy as well. And, I would be very hard pressed to find any business that has not reopened post Covid, if we are in fact even in a post Covid era.

I too live in a rapidly developing area and things seem busier than ever if you look at the roads and development.

However, I am not sure retailers are getting the baskets they were getting. Places like Bed Bath & Beyond, Petsmart, and Best Buy seem to have less activity. Also high priced conventional grocery stores seem to be losing traffic. I also notice there seems to be a real uptick in traffic at certain retailers perceived as discount stores; I am seeing more customers than ever at places like Sam’s Club, Big Lots, and Grocery Outlet. Walmart and Target are also staying very busy.

Some retailers have really blown this like Dollar Tree with its price increase. Their stores are deserted in my area since the price increase. What is funny is their mix is expanding a bit but once you lose the customer it is tough to communicate the mix expanded and there really are some items that are worth $1.25.

Why drive to a store when you can shop online? Unfortunately for retailers, rising gas prices impact delivery costs as well. It’s going to be really important to focus on fulfillment efficiency to reduce labor costs, ship from the location closest to the customer to keep delivery costs down, and find new and creative ways to maximize the value of each sale when customers are in stores.

Beyond the gas price increases, the overall inflationary situation has had far more impacts on discretionary spending. The February consumer price index, which measures changes in the cost of food, housing, gasoline, utilities, and other goods, rose by 7.9 percent over the past 12 months. This has led to the most significant inflation surge in over 40 years, with overall prices up 0.8 percent.

Higher gas prices may amount to more purpose and mission-driven shopping journeys. Conscious consumerism has already been in motion, and the latest inflationary figures may add more momentum to this movement. In addition to this, we should expect an increase in digital orders. Consumers will be more conscious of spending their discretionary money as prices on everyday staples have increased.

Yes. Not sure how we would not see this coming. Consumers may not be attributing the decline in store trips to inflation but it is related to gas prices. The average U.S. household is now paying over $5,000 more per year YOY for the same goods and services. This will impact discretionary income. Gas prices are more visible and top of mind, so consumers will be adjusting their behaviors. Overall, less store trips will mean a focus of conversion and driving up basket size.

This is not a surprise. Remember the last time gas went this high? Stores and malls turned into ghost towns. Closures of many stores and entire chains followed.

Also, interest rates are going up and many retailers are in heavy debt and in some cases with adjustable rates on their debt. Again this will cause some serious effects.

Consumer debt increased $40 billion in February reaching a record high near $4.5 trillion in the US.

What you are seeing here is the effects of the inflation. This is how to destroy businesses and an economy in action.

I think it will depend on the store. As always, when the economy slows down and inflation is up, discount stores start taking revenue from more expensive stores. Unfortunately, it doesn’t look like this inflation is temporary.

Braintrust
"If there is a positive side to higher fuel costs, it’s that shoppers are more invested in one-stop shopping and getting more items crossed off the list during each visit."

"At nearly 8 percent and wage increases for most Americans at or below 3 percent, it’s no wonder foot traffic is falling in most retailers."

"The average U.S. household is now paying over $5,000 more per year YOY for the same goods and services. This will impact discretionary income."