Fred’s amps up the treasure hunt 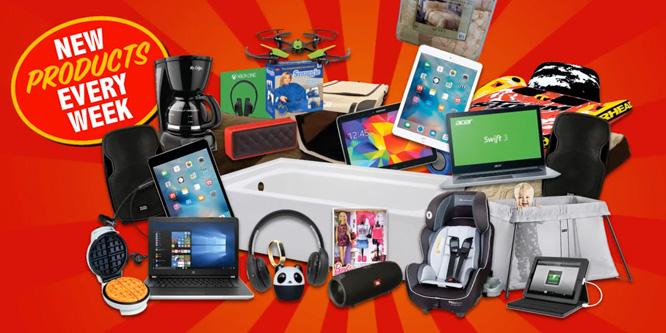 Fred’s, the deep-discount retailer in the southeast, has launched a new treasure hunt concept, “Fred’s Closeout Bonanza,” that drops prices throughout the week until all the items are gone.

The first two Fred’s Closeout Bonanza locations opened this past Saturday in Bartlett and Memphis in Tennessee.

Every Saturday, the store is refilled with new merchandise, all priced at $9.99. A microsite for the concept highlights a number of items available for sale that were worth well over $9.99, including a Mr. Coffee coffeemaker, a Fitbit flex 2, a set of Skullcandy Hesh 2 headphones and an OtterBox Defender Series iPhone case.

On Sunday, prices for whatever is still available across the store are reduced to $4.99. Fred’s then lowers prices to $2.99 on Monday, to $1.99 for Tuesday and Wednesday, 99 cents on Thursday and 19 cents on Friday.

Fred’s site states: “Pick the shopping strategy that meets your needs! Come Saturdays to get everything hot off the truck! Come later in the week for smaller crowds and deeper discounts!”

All sales are final. The store also has a few “Rules,” including no pushing or running in the store and no opening item packaging.

Fred’s restocks stores late Friday with a promised mix of different goods. The items include inventory being liquidated from other Fred’s stores, merchandise returned to other retailers and special purchases arranged by Fred’s.

“We saw the opportunity for doing something different, something no one else is doing in the Memphis area,” Fred’s marketing manager Amanda Smith told Memphis Commercial Appeal. “We’re putting products in the stores that are excellent deals, even at $9.99.’’

Fred’s Closeout Bonanza’s pricing scheme appears unique for traditional retail. In Texas, Family Thrift Center uses a similar price-dropping scheme, pricing all items on Thursday when new inventory arrives at $2.00 and gradually bringing them down to 25 cents by Wednesday.

DISCUSSION QUESTIONS: Do you expect the Fred’s Closeout Bonanza pricing concept to catch on with consumers? Does the execution and economics involved make sense for other retailers?

Please practice The RetailWire Golden Rule when submitting your comments.
Braintrust
"This progressive discount approach brings in a new element that turns the treasure hunt into a game of strategy for consumers. "

"It’s intriguing that Fred’s is taking the treasure hunt concept to an extreme, but the real challenge will be keeping customers coming back..."

17 Comments on "Fred’s amps up the treasure hunt"

Notwithstanding the gimmicky approach, I’m sure Fred’s pricing concept will appeal to some shoppers. It’s hard to say whether the formula will scale, I suspect not. The trick to doing treasure hunt well is having a ready and reliable supply of merchandise — if Fred’s and other retailers can keep the product offering fresh and compelling, they will have a market.

This is a treasure hunt on steroids! Consumers have demonstrated their love of the treasure hunt and it has been very lucrative for off-price, discount and dollar stores. This progressive discount approach brings in a new element that turns the treasure hunt into a game of strategy for consumers. “On which discount day will I shop or will I shop multiple days to watch the quantity of an item I want, to make sure I buy it before it is gone?”

It is also a strategic “game” for the retailer, as they have to factor in what the average discount percent will be each week to ensure they price products accordingly to remain profitable. It will be interesting to see how this plays out for Fred’s and if other retailers jump on this bandwagon.

The concept of a treasure hunt is not a new one. One difference here is that they are being more overt about the idea and promoting it as a reason to come into the store and buy now. If the economics hold, this could be a meaningful differentiator for them, as long as the merchandise is of quality and shoppers don’t get sick of them ALWAYS promoting.

This sounds like the old Filene’s Basement concept of automatic markdowns over time!

It creates a game of cat and mouse between consumer and retailer and introduces some tension into the buying process that encourages purchasing and makes customers check back regularly.

While the concept works for a discount retailer like Fred’s, I doubt many other retailers will follow suit. There is too much work involved in marking down products and many mainstream consumers dislike constantly changing prices.

Often, unconventional promotions fizzle out when the reality falls short of the vision. This is an intriguing idea easily understood by consumers that can work if Fred’s gets two things right:

I suspect this will be a big hit with consumers. Shoppers have proven that the treasure hunt is a desirable activity that becomes a social currency as they brag about what they were able to get a deal on. Also, there is no promise of anything being in stock (after the first hour of so of opening) so Fred’s can eliminate that headache and can create a sense of scarcity with the most valuable items.

Absolutely. Some people need to save money while shopping, but everyone likes to save money. Fred’s Closeout Bonanza is both a closeout and a bonanza. Plus, the nature of the pricing strategy will tend to generate multiple visits as customers seek their optimal price for items being followed. In addition, you can expect that while they are in the store updating their research, they may tend to buy additional products that are unplanned.

In essence, Fred’s concept is similar to the treasure hunt phenomenon pioneered by Costco. Get it now or forever miss the opportunity.

As far as other retailers are concerned, if they are carrying excess, dated merchandise they should make it a fun event to unload it.

I’m not a fan of retailers gaming the consumer on daily pricing, especially when it may cost the retailer precious points of margin. Are they really providing any lasting value or just buying up and re-selling old inventory to their low-income shopper base?

There is no doubt that there will be a market for Fred’s Closeout Bonanza. Sheer curiosity is enough to get customers through the door, but is it sustainable?
Without having insight into the economics I can’t say whether it would make sense for other retailers — or Fred’s for that matter — but it certainly would not make sense for any company selling their own brand of goods, the devaluation is too intense. I wonder how Fitbit, Mr. Coffee and other companies whose brands are being sold at these deep discounts feel about this strategy long term?

This dumping ground approach to retail including bargain basements and liquidators has its place for value shoppers and those who accumulate stuff. But I don’t see a profitable long-term future for such bargain retail. Consumers can be amused by these side shows, but the main tents deliver the best long-term consumer value.

It sounds like a lot of work for consumers as well as the retailer. As consumers have less time, the idea of having to check on items every week and then trying to figure out when to get the right price before the item is gone adds inconvenience. Then the consumer would have to complete shopping somewhere else. This sounds like a fun novelty but not a concept that works for consumers who have little time to shop.

Fred’s customers will love this new treasure hunt experience, and I am sure this program will build new customer momentum in Fred’s Closeout Bonanza. The key — keeping merchandise fresh and surprising with great finds, especially on the first days. My thoughts have turned to the absolute necessity of item procurement; they must have found some key vendors willing to work with them, and assure them that product will be constantly available. That’s the life line! I hope the rent is low enough to meet the requirements of low margins. That being said, this has the excitement of Harbor Freight Stores clearance tent sales on Saturday mornings.

What is wrong with adding a little excitement to the shopping experience? Nothing! So why not enjoy the thrill of the hunt and then go look for what else you might be able to use while in the store? I think Fred’s might have hit on something to at least drive traffic. There is nothing wrong with that. So go for it and strike while the bargains are hot.

This is, of course, a concept, if not pioneered by, then at least made famous by Filene’s, with its “automatic” bargain basement; and they did well with it … for decades. But that was a long time ago, and nowadays thrifty (and impatient) people can readily find bargains in lots of places … which probably (partly) explains why Filene’s Basement isn’t around anymore. I wish Fred’s well, but I’m dubious how sustainable this is as a business model … at least on any extensive basis.

Fred’s strategy really takes dynamic pricing to a whole new level. As any retailer knows, pricing is a major part of what gets shoppers in the door. It’s intriguing that Fred’s is taking the treasure hunt concept to an extreme, but the real challenge will be keeping customers coming back once the shine wears off. That hinges on a good inventory and a willingness to slash prices, which can work for a company like Fred’s but may not for others.

I think this is a lot like Groupon when it debuted. It’s interesting until it isn’t. Color me doubtful this is around still in February.

It’s no secret that discount retail continues to do well and this is in an interesting spin on the idea. The idea may get customers to visit Fred’s more frequently to see what the new products are and/or to see what’s super cheap that day, and I presume this is what they are banking on with the idea that people will buy other things while there. For Fred’s it’s likely to be a good way to clear out inventory, which will have some cost savings, and you have to wonder how many people will end up buying things they don’t need just because they’re 19 cents!

I do wonder if the novelty will wear off after a while, but it’s certainly an interesting experiment. It’s another one I’d love to get the numbers on as it would be fascinating to know what shifts on what days, how fast certain things go, what’s left around until the Friday. Fred’s may get valuable insights that last much longer than the idea itself.

Braintrust
"This progressive discount approach brings in a new element that turns the treasure hunt into a game of strategy for consumers. "

"It’s intriguing that Fred’s is taking the treasure hunt concept to an extreme, but the real challenge will be keeping customers coming back..."