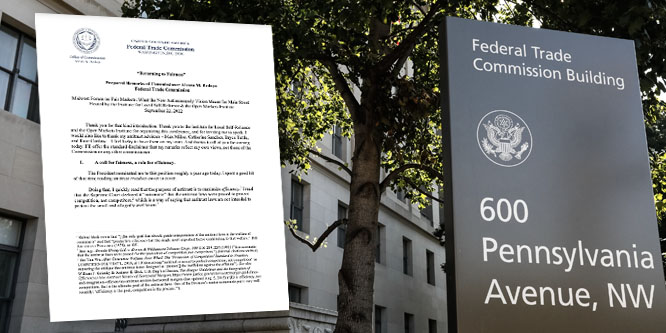 Independent grocers and pharmacies may have found the ally they are looking for in Alvaro Bedoya, commissioner of the Federal Trade Commission (FTC).

Mr. Bedoya, speaking yesterday at the Midwest Forum on Fair Markets in Minneapolis, said that the emphasis of courts on protecting “efficiency” rather than “fairness” in trade situations has created an imbalance that favors large businesses over small players. The solution, he said, is enforcement of the Robinson-Patman Act.

Mr. Bedoya spoke about the case of an independent grocer, R.F. Buche, with 21 stores in South Dakota, primarily on Native American reservations that include some of the most impoverished communities in the U.S.

He said that Mr. Buche did not have access to prices and product sizes sold in big box stores even though his wholesaler purchased the same quantity of items as chain competitors.

“When the pandemic hit, manufacturers cut supplies to Mr. Buche and his wholesaler,” said Mr. Bedoya. This included him not being able to obtain items approved for the government’s WIC (Women, Infants and Children) program such as infant formula.

The National Grocers Association (NGA) “applauded” Mr. Bedoya’s remarks and his call to “resurrect” Robinson-Patman. The trade group has advocated for more forceful use of the act by the FTC, which has not brought a case in more than 20 years.

“Unfortunately, this is not a new reality faced by independent community grocers across the country, where the playing field on which they are operating is not level and dominant firms exercise their power to demand special treatment from suppliers without an economic justification. Independent grocers and the wholesalers that serve them provide critical competition on price, quality, service and convenience,” NGA president and CEO Greg Ferrara said in a statement. “A spotlight has been shone on these anticompetitive, harmful tactics and we look forward to working with the FTC and other policymakers to restore a competitive, robust marketplace that benefits local economies, independent grocers and their shoppers alike.”

DISCUSSION QUESTIONS: Should the Federal Trade Commission enforce the Robinson-Patman Act more vigorously? Where do you see appropriate examples of where it could be applied?

Please practice The RetailWire Golden Rule when submitting your comments.
Braintrust
"While the concept of price discrimination hasn't changed, we must ensure an already shaky supply chain isn't further disrupted from trying to enforce a generations-old law"

"Robinson-Patman will be virtually impossible to manage, or enforce, on Amazon, and its third parties. There are far too many variables to watch, monitor, or control."

"Quite frankly, the FTC is a menace which often makes things worse, not better. So it is with this latest intervention."

The FTC does not seem to have a clue about the principle of economies of scale – which is why a much larger customer can secure a better deal than a much smaller one. There is nothing suspicious or strange about this, it is a common business practice based in logic and hard-nosed financials. Indeed, it is thanks to economies of scale that big chains like Aldi and Walmart and Dollar General can offer low prices which is extremely beneficial to many hard-pressed consumers. In short, the FTC should not meddle in markets that are working just fine in order to make them work in a way they subjectively believe to be “fairer.”

Except that for many years Walmart was the biggest grey market seller in the U.S. So no, it doesn’t work and yes, it should be enforced. I spent a lot of time talking about this the first 10 years I was an analyst and, frankly, it’s one of the reasons the universal product catalog couldn’t be implemented. Along with differences in VSN was the fact that at the end of the day, you couldn’t really pass cost along in the data, which eliminates the expense savings.

One of the rare occasions I disagree with you, Paula. Most things the FTC touches end in failure because they don’t understand the market and their judgment is inferior to the collective judgment of the actors, including consumers. Like that time it made Dollar Tree divest 330 stores when it acquired Family Dollar on the grounds of competition: Dollar Express was born and it soon went bankrupt because it was too small to compete. Or the time it forced Albertsons to sell Safeway stores to Haggen which then went belly up because of the debt it acquired during the purchase. Quite frankly, the FTC is a menace which often makes things worse, not better. So it is with this latest intervention.

Peter Drucker famously stated that “what gets measured, gets managed.” But “efficiency” is a measure of how well a system or process performs its designated purpose. So a system that has preferential treatment built in will not intentionally optimize equity as a result. Robinson-Patman should absolutely be enforced more vigorously, but, more importantly, the reasoning behind the Act should be broadcast widely so that the underlying reasoning is understood and enculturated. Famed psychologist Philip Zimbardo taught us that “bad apples” are the result of “bad barrels,” but “bad barrels” are the result of “bad barrel making.” If we create systems with equitable intent and metrics, we will get equitable results.

Larger grocery operators have a clear competitive advantage due to the scalability, capabilities, and efficiencies inherent in running shared services nationwide. The independent grocers and their wholesale distributor partners have had to increase their partnership, collaboration, data sharing, and build an operating model to drive their efficiencies and cost savings.

There is no need for the Federal Trade Commission to enforce the Robinson-Patman Act. It is business as usual, and companies and their partners need to evolve and pivot to meet the changing macroeconomic conditions to thrive and survive. It will take plenty of collaboration and partnerships between the 21,000 independent grocers and their wholesale distributor partners to build a competitive edge.

Doesn’t the government itself expect a “bulk discount?! The FTC itself summarizes it that “A seller charging competing buyers different prices for the same ‘commodity’ or discriminating in the provision of “allowances” — compensation for advertising and other services” is price discrimination. Resurrecting a 1936 law that does not take the current day into account — perfect!

Robinson-Patman doesn’t prohibit volume discounts. It is designed to “prohibit sales that discriminate in price (on the sale of goods to equally-situated distributors) when the effect of such sales is to reduce competition.” In other words, no preferential volume discounting to different parties.

The key word is “preferential” and who decides what that means…

Before stepping up enforcement, it would be prudent to review what’s in Rob-Pat and understand its original intent. Since it was passed in 1936 the world of retail has changed considerably, and while the concept of price discrimination hasn’t changed, we need to ensure that an already shaky supply chain isn’t further disrupted as a result trying to enforce a generations-old law.

The question ought to be, “Should the Federal Trade Commission enforce the Robinson-Patman Act?”

“More vigorously” implies it’s being enforced at all, which it clearly isn’t – and, for decades, hasn’t been. So before we can answer that we ought to ask why NGA hasn’t been successful in getting anyone interested in enforcement since when it was NARGUS. And the reason is simple. It’s really hard to prove predation, especially in a commercial ecosystem where consolidation has been the rule for nearly half a century. Are there areas where it could be applied? Maybe, maybe not. The real damage to small competitors has already been done.

I don’t think the question is about funds that pass on efficiencies like truckload discounts. The real question is performance payments for so-called displays, so-called ads, and so-called special shelf position preference.

Performance payments are rarely vetted by the manufacturers. The problem is I don’t know how the FTC measures performance or lack of it.

In theory, yes, this should be enforced. Regional and wholesaler supplied independent grocers were hit very hard during the supply chain crisis and other than a handful of, should we say, overstocked independents who bought in large quantity to get a better deal — many did not recover for months after larger chains.

But I also am afraid the wholesalers of groceries would be dragged into this too. For instance I go to various independent or small chain retailers supplied by a CA C&S warehouse. That warehouse also supplies Target and some Kroger stores. It also supplies some 10-20 store smaller chains. Mysteriously, the Target and Kroger stores and some of the 10-20 store smaller chains were receiving product from C&S while the single store or two store independents hardly got anything. One of the smaller chains took matters into its own hands and started using different suppliers (they have a small warehouse).

Vigorously? I think the word we’re looking for here is “appropriately” … as in few of us here on RW are qualified to judge what is (supposed to be) left up to expert judgement.

Those who feel the world really runs exactly the way it’s described in Econ 1 textbooks — perfect markets, perfect competition, perfect … everything — will say “no”; the rest of us, who went on to the next course, will be open to arguments.

My response might be unpopular, but Robinson-Patman Act was written by governmental people who were clueless how the retail and consumer products business, and the flow of money, actually works.

First off, Robinson-Patman was almost strictly about pricing. It didn’t take in consideration many types of vendor promotion, rebates, BOGOs, accrual, co-op, or other forms of discounting that affects pricing.

Secondly, with all due respect to the mom and pop stores, pricing is affected by volume, economies of scale, and efficiencies, as noted, and as it should be. Any supplier will tell you that the cost of doing business with a small retailer is often far more expensive than with the large ones.

Next, Robinson-Patman will be virtually impossible to manage, or enforce, on Amazon, and its third parties. There are far too many variables to watch, monitor, or control.

Has not brought a case in more than 20 years! Talk about having no voice. That’s a travesty.

Braintrust
"While the concept of price discrimination hasn't changed, we must ensure an already shaky supply chain isn't further disrupted from trying to enforce a generations-old law"

"Robinson-Patman will be virtually impossible to manage, or enforce, on Amazon, and its third parties. There are far too many variables to watch, monitor, or control."

"Quite frankly, the FTC is a menace which often makes things worse, not better. So it is with this latest intervention."