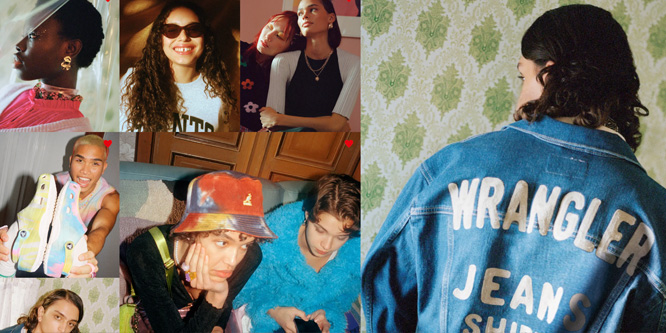 H&M has opened up its e-commerce sites in Germany and Sweden to third-party brands on a trial basis.

The retailer is testing to see whether a marketplace model will resonate with consumers in the two European countries before it scales the test further.

Third-party merchandise carried on the sites include items from sister brands of H&M, including &Other Stories, Arket, Monki and Weekday. H&M is also involving non-related brands like Crocs, Fila, Lee and Wrangler in the test, carried on a section of the site called “H&M with Friends.” H&M currently has 13 women’s and 15 men’s labels on the German and Swedish sites.

A H&M spokesperson told Fashion Network, which first reported the news, that its choice of the two launch markets was tied to each country’s “long tradition of catalog shopping.” The retailer has had its “e-shop” operating in Sweden since 1998 and Germany for the past 15 years.

The pilot of an H&M marketplace may be new to the retailer but not its parent company. H&M Group launched Afound in 2018. The site, which operates in Austria, Germany and the Netherlands, offers discounts on H&M Group brands and third-party merchandise in the beauty, fashion, interior and sports categories.

H&M offers online shopping in 54 countries, and nearly one-third of the company’s total sales are conducted through its sites. An increased focus on digital does not appear to have negatively affected the company’s bottom line performance. The company reported a gross margin of 52.8 percent for last year, up from 50.0 in 2020.

The fast-fashion marketplace test puts H&M in the company of other large retailers (Amazon, Target, Walmart) that are doing the same. That list will soon include Macy’s, which plans to launch its own curated marketplace in the second half of 2022.

Macy’s signaled its intentions in November. CEO Jeff Gennette said on the company’s third-quarter earnings call that Macy’s marketplace will provide customers with an “even greater breadth of assortment of exciting products to deliver on our promise of style and curation.”

“Our digital business is on track to generate $10 billion in sales by 2023 and that figure does not include the incremental revenue we expect this new marketplace platform to generate,” he said.

DISCUSSION QUESTIONS: Would an H&M marketplace be successful if launched in the U.S.? Do you think H&M will stick to fashion brands on its marketplace or expand to other product categories, as well?

Please practice The RetailWire Golden Rule when submitting your comments.
Braintrust
"It’s much more complicated to develop and manage your platform, brand, and ecosystem than conducting traditional retailing. "

The appeal of a retailer’s marketplace is a function of their brand power, characteristics of their customer base, and size of their affinity ecosystem. As more retailers explore these marketplaces, the more dilutive their effects will become. The path is somewhat similar to the streaming subscription wars. There is a limit to how many subscriptions a consumer will sign up for. In our case, instead of paid subscriptions, retailers are asking for a commitment of time and mind share. It’s much more complicated to develop and manage your platform, brand, and ecosystem than conducting traditional retailing. H&M is strong in Germany and Sweden, and their success in those countries will not automatically translate to the U.S.

H&M’s marketplace would definitely be successful in the U.S. as shoppers are looking for newness and product delight.

As a consumer, I can’t wait to shop other brands under the H&M umbrella like Arket and others in the group. Having access to styling ideas and completing the look with accessories and footwear from hot brands is a huge plus. A one-stop shop for fashionistas is exactly what ASOS has created so why not H&M?

I like the idea as described. This isn’t akin to the Amazon Marketplace, but like adding brand exposure to marketplace. The big challenge of the open third-party marketplaces is assuring that the participants are vetted. With the brands described in the discussion, that issue goes away.

This strategy recognizes that friction, like having to login to a different site, reduces maximum sales. H&M takes away that friction for the shopper that starts at the H&M site. It further encourage the purchase of complimentary apparel that the shopper may not have considered before they landed on H&M.

Marketplaces are a great way of expanding choice, driving more traffic to sites, and generating incremental sales. However with more and more retailers bolting marketplaces onto their mainstream sites, differentiation becomes even more critical lest everything should turn into big generalized offering. That means thinking carefully about the marketplace brands offered, looking for exclusive partnerships, and ensuring that own-brands remain at the front and center of the offering. Marketplaces cannot be an excuse for throwing anything and everything at the consumer.

Moving into a marketplace model, while remaining highly stylized and curated demonstrates how modern H&M is. This is an extremely relevant approach, especially for a brand like H&M that’s trendy and forward-thinking. Shoppers just want to find what they’re looking for, and this allows H&M to offer more of what they’re looking for.

At the onset, this looks like a good idea and a value add for the H&M experience.

However, H&M will need to set stringent guidelines and rules for the third parties. They’ll also need to take ownership over the entire experience and take accountability for solving any challenges consumers face with third-party purchases.

ASOS is already rolling with a marketplace strategy with much success and Urban Outfitters’ resale marketplace continues to be a focus for them. H&M launching a similar format aligns with its sustainability focus and can certainly augment its existing rental programs. Smart move, but it will need to expand to resale products as well to compete with growing companies like DePop.

Aligning with a “fast-fashion” brand, no matter the strides H&M has made recently in elevating the brand and sustainability initiatives, opens a potential conflict that the third-party brands share similar practices. Their overall reputation with consumers is a critical factor. The vetting practice of what brands are sold on the marketplace will directly impact success in the U.S. If the brand already has strong brand equity it could be diluted by aligning with H&M. Selecting the right brand assortment will be key.

Braintrust
"It’s much more complicated to develop and manage your platform, brand, and ecosystem than conducting traditional retailing. "