How did Crocs ever become cool and how long will it stay that way? 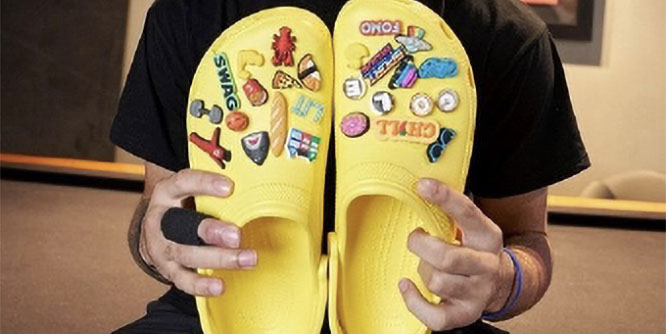 The musician Questlove showed up on the red carpet at the 93rd Annual Academy Awards in a pair of shimmering gold Crocs, drawing praise across social media as well as wonderment over how the clunky foam clogs have become a fashion statement.

Crocs, which launched as a boat shoe in 2002, became a ubiquitous summer shoe by the time it went public in 2006. The popularity of Crocs was driven by praise from fans for the extreme comfort of the shoes even as  they were widely derided over their looks.

The brand’s sales began flattening YoY in the latter part of that decade as the novelty of Crocs wore off. Crocs even landed on Time magazine’s “50 Worst Inventions” list in 2010.

The company closed hundreds of locations, significantly eliminated SKUs to focus on its core clog and slowly began ramping up marketing efforts under  CEO Andrew Rees.

Credit for Crocs’ newfound fashion respect is attributed by many to successful collaborations with star musicians including Justin Bieber, Bad Bunny and Post Malone; fashion houses such as Balenciaga; and streetwear labels such as Chinatown Market. Many limited-edition collaborations have quickly sold out.

Crocs’ innovative prints including glitter, camo and Disney/Pixar characters as well extensive range of Jibbitz add-on charms are also said to be ideal for social media sharing. #Crocs has more than 1.5 billion views on TikTok.

Crocs’ recent strong growth — including a 64 percent gain in the first quarter — is due, in large part,  to the trend toward comfort footwear seen during the pandemic. It’s unknown whether comfort will be prioritized to the same degree post-pandemic. Several social media commentators nonetheless praised Questlove’s look for epitomizing pandemic life.

“Questlove’s choice to pair a suit with Crocs is wild, to say the least,” wrote Fabian Gorsler for the fashion website, HighNobility. “It definitely wouldn’t have worked before the pandemic and — if we’re being totally honest with ourselves — it still doesn’t really work now. But we’re at a crossroads in fashion, where the importance of comfort can’t be understated.”

DISCUSSION QUESTIONS: How do you explain Crocs’ recent success and its ability to resonate with younger consumers? Is the brand’s momentum being driven by factors that go beyond the pandemic-driven comfort trend?

Please practice The RetailWire Golden Rule when submitting your comments.
Braintrust
" Crocs will forever be the ugly shoe but if it’s trending on social, it will sell."

"Crocs are the anti-fashion, irreverent style statement. And they are damned comfortable no matter what anyone says!"

"Crocs are amazing. Like a cat, Crocs seem to have nine lives."

20 Comments on "How did Crocs ever become cool and how long will it stay that way?"

Crocs are the anti-fashion, irreverent style statement. And they are damned comfortable no matter what anyone says! As with all fashion fads, things come and go, and I suspect this short-term fixation on Crocs will too. I don’t see Crocs ever going away completely, since they do have a true loyal following, but I doubt that what we’re seeing is the start of a sustained trend for Crocs.

Anti-fashion? Does anybody remember “Hush Puppies are Dumb”? The campaign was the talk of the advertising industry way back when. And, for a time, they were very popular. Do they exist today?

Maybe Crocs are the Birkenstocks of the Gen Zs.

Crocs has done a great job identifying trends in pop culture and finding a way to interpret those trends in their products. It doesn’t hurt that they are affordable, comfortable, different and already have a brand identity that they can build on.

The success of Crocs during the last 12 months is directly attributed to its new “cool” factor through its collaboration efforts.

Ugg, Geox, etc. – the comfort brands have had a similar impact once celebs like Paris Hilton in her heyday, started to wear them. The brands took off and entered the mass market because of the “likes” and engagement.

Crocs will forever be the ugly shoe but if it’s trending on social, it will sell.

Younger consumers may not remember or care that they were worn every day by Mario Batali, the New York chef, restaurateur and host/personality on ABC’s The Chew. He was basically banned from the show and had to give up his partnerships due to charges of sexual misconduct with his staff. Then the popularity of Crocs went out the window. Goes to show that we have have short memories and that an appearance by Questlove tells the younger crowd that it’s OK to wear Crocs outside your home. Yikes!

I mentioned Crocs and healthcare workers in my post. I find they are also popular with restaurant kitchen workers, for the very same reasons.

Crocs will never be cool — and yet, that very fact means that Crocs will always be cool to a segment of consumers. A bump in sales to people who are prioritizing comfort and fashion during the pandemic certainly has helped Crocs spread into households where they might not have been found previously, and poses a good opportunity but there is certainly more to it than the “no one is going to see me, so I’m gonna wear my sweatpants and Crocs.” The “Crocs Backlash” days are over and so today’s buyers know what they are getting into – heavenly clouds to support their weary and worn feet.

I just think they are ugly, but Crocs are very popular among local middle school girls here in my little part of New Jersey. The kids look to make fashion statements with the bo the colors of the Crocs but also the charms that attached through the holes in the top of the shoes.

Check out Yeezy Foam Runners, they are $400 and even uglier. lol

My middle school grandson has been into Crocs for years. My high schoolers tease him, but he doesn’t care.

With you, George. Hard to look at. And Justin Bieber only made it worse by making Crocs with socks a thing.

Crocs are goofy. They send the ultimate IDGAD message. They’re easy, comfy and fun, especially when loaded with Jibbitz – kids trade them and there are loads of tutorials online on how to make your own. Personalizing your Crocs is a big deal. The company was smart to refocus on the original clog. All the other styles were just a distraction.

In today’s world where we go out less often than ever, comfort wins over fashion. And when it comes to comfort, Crocs has carved out a niche – an innovative, fun brand which, like their reptilian counterpart, can be versatile and amphibious.

Crocs have been popular in the healthcare community for years. Obviously for comfort for those on their feet all day. I suspect that popularity will continue. They are captured footwear (left in the hospital or office) and not taken to the street.

Crocs are amazing. Like a cat, Crocs seem to have nine lives. I purchased my first pair in Aspen on a ski weekend at least 10 years ago, and I still wear them year round. My friends tease me about them, but I bet some of them have the purchase in mind. This will be like a huge wave creating lots of purchases.

Why the recent success? Well, they are comfortable and affordable, but that’s not enough to spur a youth-fueled buying frenzy. Dialing back a little, creating the mass marketer’s version of scarcity, marketing by paring inventory, and creating limited editions are all probably part of the explanation. Youth sales are spurred by the same things that have always spurred youth fads and trends. My bet? Questlove sold more Crocs than COVID-19 did — or will.

Someone please make it stop, it hurts my eyes. I can’t help but feel like it’s payback from younger generations. But in truth, the Crocs leadership have done a brilliant job of expanding product lines, creating “jewelry” to personalize, and knowing exactly which customer groups to target. I hope they have a sustainability plan however as the use of plastics is going to become a significant issue through the current decade.

Low cost. The younger generation, strapped for cash, and only able to afford one pair of Nike shoes, can find some extra cash for their Crocs and they’re satisfied. The celebrity endorsements and marketing pushes have made the shoes acceptable. Not a fan of Crocs, but my family loves them. Will they stay cool and what are the pandemic effects? Maybe they’ll continue to be attractive, but there are many knockoffs and the pandemic’s only negative impact has been to beach and tourist travel as a part of the Crocs business. We’ll see more interest over the summer — Crocs season — but extensions of good fortune depends on whether WFH becomes a “thing” or we return to workplaces.

Braintrust
" Crocs will forever be the ugly shoe but if it’s trending on social, it will sell."

"Crocs are the anti-fashion, irreverent style statement. And they are damned comfortable no matter what anyone says!"

"Crocs are amazing. Like a cat, Crocs seem to have nine lives."