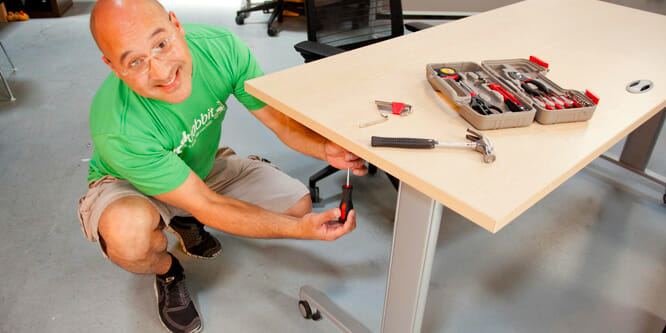 How many people does it take to assemble a piece of furniture from IKEA? The answer to that question now appears to be only one — at least in the New York metro and San Francisco Bay areas where the retailer has rolled out an in-home assembly program using its TaskRabbit service.

IKEA acquired TaskRabbit last October. The company, based in San Francisco, matches “taskers” with customers who need help with errands, home repairs, housecleaning, plumbing, etc. The two companies had worked together in the U.K. since 2016 when TaskRabbit was hired to assemble furniture bought at IKEA’s London store.

Customers who want someone else to put their furniture together pay a flat fee, beginning at $36 and going higher depending on the piece. According to reports, pricing for assembly using TaskRabbit is cheaper than other outside services that currently perform the same function for IKEA pieces.

Jackie DeChamps, chief operating officer at IKEA Group, told CNBC that customers in the San Francisco area have been pleased with the new assembly program.

When IKEA Group acquired TaskRabbit last year, the company’s CEO, Jesper Brodin, saw it as an acknowledgement that “urbanization and digital transformation” are forcing retailers to move more quickly and become more flexible in their approach to business. The goal, he said, was for the company to offer products and services that made the everyday lives of IKEA’s customers “a little bit easier.”

DISCUSSION QUESTIONS: How do you see the TaskRabbit service affecting the various aspects of IKEA’s business in the U.S.? What will expansion of the service mean for competitors to IKEA?

Please practice The RetailWire Golden Rule when submitting your comments.
Braintrust
"IKEA has a knack for providing home solutions and this extension is taking that skill into service delivery also."

"For those, like me, with demonstrated low frustration tolerances it is a cost effective alternative to breaking things, pouting and being mad at IKEA."

For those who find building IKEA furniture pure agony, the TaskRabbit assembly service will be a welcomed addition. It may even be helpful in convincing some adamant non-assemblers that IKEA stuff is worth another look. But don’t forget, IKEA has done pretty well with their current offering and I suspect that a large percentage of their loyalists are quite happy to continue to buy and DIY. As for competitors, who would that be?

Self-assembly is one of the reasons IKEA can offer low prices. However, it is also off-putting to a sizeable number of shoppers. TaskRabbit helps IKEA to address this issue without affecting the core proposition; as such, it should help the company to grow sales.

While TaskRabbit falls a little short of the white glove service offered by some furniture retailers, it nevertheless allows IKEA to compete more effectively with those players that focus on added value customer service.

It often takes more than one person to assemble furniture. TaskRabbit helps expand IKEA’s market to single parents, older people, and others who could use a hand in assembling that Billy bookcase. I’ll predict measurable results.

It is always better to offer shoppers more options than fewer. TaskRabbit might bring in some customers to IKEA who were either unable or simply unwilling to assemble their own furniture.
As for the competition — that means shoppers can now get creative IKEA furniture without the hassle that was previously attributed to it. I like that IKEA is thinking outside the box to reach more customers that might be interested in their furniture.

Assembly is a value-added service and for anyone inclined to spend the money for it, a source of supply is generally available. Does IKEA think that lack of assembly service has hurt its business? I think not. So why TaskRabbit? It can’t hurt in terms of product assembly and may even position IKEA to access non-home markets (municipal buildings, etc.,) and the clean-up market where hands and shelves are needed to tame that unkempt space that every home has.

While I like the idea, I wonder how long it will take consumers to start adding the price of the TaskRabbit service to the IKEA piece and comparing it to similar items at discount furniture stores? The appeal of IKEA styling and the initial low price may overcome this initially, but I would be very curious to know the repeat on this combination.

Three of the most dreaded words in the English language are “some assembly required.” With the acquisition of TaskRabbit, IKEA moved to lift that burden from customers’ shoulders. Look for IKEA to heavily promote this service as it rolls out across the country. This also means that other retailers who want to compete will have to offer similar services, maybe even through TaskRabbit, which puts more money in IKEA’s pockets.

One of the key differentiators for IKEA has been its affordability, as well as the ability it gives customers to assemble their own furniture. Value-added services such as TaskRabbit are a welcome addition to the IKEA brand, and help to mitigate the friction and frustration in having to assemble your own furniture.

The core IKEA customer may just be more than happy to continue to assemble their own furniture. However, in very migratory cities and university areas such as NYC, SF, Boston and Washington D.C, this service may just be a differentiating factor as to whether or not you shop at IKEA vs. their higher-priced competition.

This serving has good potential, as Cathy Hotka points out, among the groups listed. In addition, it is more attractive in urban areas, because the demographics would indicate that in an urban environment, people have less time, are probably less mechanically inclined or may be able to afford to pay for the “luxury” of having someone else do the assembly.

Fantastic move by IKEA on purchasing Task Rabbit. Weren’t all their non-furniture savvy shoppers already using the service for assembly anyway?
IKEA has a knack for providing home solutions and this extension is taking that skill into service delivery also.

Great move for TaskRabbit but for TaskRabbit to really turn a profit and retain their employees I’d imagine they are going to need a few more companies to partner with. I would not be surprised if Wayfair, Overstock and Amazon are inquiring though about partnerships as this offering could be a game-changer.

Most simply this means more business for IKEA. I am confident that many people don’t even consider IKEA because of the “assembly required.”

We have an IKEA kitchen and a few other IKEA pieces. They were built and installed about 13 years ago. I assure everyone, I did not assemble a piece. IKEA provided a list of contractors that could do it. The cost of the kitchen including the contractors was still thousands less than if we would have done it traditionally.

This step is a big upside.

This service truly represents the last mile of customer service. We use that phrase for supply chain, however I believe this is the true consumer end of the chain for many categories of products. A great service and a great differentiator.

TaskRabbit makes IKEA’s existing offering — clearly popular with lots and lots of customers — even more attractive. For those hearty souls who like to emphasize the “Y” in DIY construction, there’s the satisfaction of having not spent extra money. For those, like me, with demonstrated low frustration tolerances it is a cost effective alternative to breaking things, pouting and being mad at IKEA. In short, both camps are happy. As to the second question, IKEA is already a formidable competitor in this space. Making assembly easier just makes them all the more competitive and forces the competition to try to match the offer or potentially lose sales.

When I read the headlines on this topic my first thought was that IKEA was hugely off-brand in this effort. And my concern for this as “anti-brand” continues.

That said, where it begins to make sense to me (having assembled quite a bit of IKEA and IKEA-like furniture) is that their larger pieces and larger combinations are incredibly difficult to assemble.

It’s a great idea, “I bought my kitchen at IKEA” but assembling it requires nearly the skills of a carpenter.

SO, if I think of the service around their larger installations, it makes complete sense. Unfortunately for their brand, they haven’t yet sorted out how to place the service in context. So at this point, I’ll give it a qualified “not a bad idea but they’d better improve their communication.” Just because you CAN sell it as a retailer doesn’t mean you SHOULD.

IKEA realizes that busy consumers truly value convenience and offering their customers a convenient service to purchase, deliver and assemble furniture is a way to make their lives easier. Consumers that don’t want to deal with the hassle of assembling furniture were probably previously reluctant to purchase unassembled items from IKEA. Those that did make initial purchases were frequently dismayed by the assembly hassle and didn’t return again. This value-added service will expand IKEA’s target audience to broader demographics and also eliminate the bad customer moments attached to the 1st purchase assembly nightmare.

The TaskRabbit services networks will enable IKEA to potentially offer other value added services. Other home furnishing retailers that sell unassembled furniture may likely follow the leader and offer similar assembly services or look to partner with third-party companies to offer this service.

This is a real winning move for IKEA!

Having reasonably priced, experienced help available to put IKEA furniture together is a great service for consumers and a great introduction to TaskRabbit. Consumers may then continue to use TaskRabbit. However the other parts of TaskRabbit are not necessarily related to IKEA.

Braintrust
"IKEA has a knack for providing home solutions and this extension is taking that skill into service delivery also."

"For those, like me, with demonstrated low frustration tolerances it is a cost effective alternative to breaking things, pouting and being mad at IKEA."