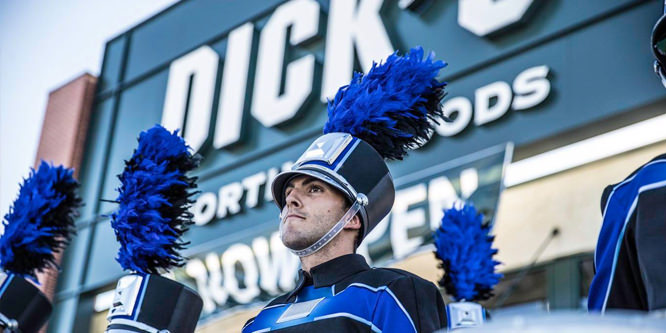 “What we see with so many stores that are closing or purported to close or you expect will close, there is going to be just a flood of real estate in the market,” said Ed Stack, CEO, on the company’s first-quarter conference call. “Our view is that we should not be opening a whole lot of stores right now because we’re going to pay a higher rent today than we would two or three years from now.”

He said the company is already starting to see prices come down and “we believe this trend will only accelerate in all true A malls.”

Mr. Stack stressed that its new stores “continue to perform very well” with first-year store productivity in excess of 90 percent. The company is not planning to close any within its fleet of more than 690 stores, which he said are “in great shape from a profitability standpoint.”

Mr. Stack also said Dick’s has a “tremendous amount of flexibility“ within its existing real estate portfolio to rework leases in the years ahead.

The move to slow its store growth — along with efforts to streamline its vendor base and reduce its use of traditional advertising — enabled the company to reduce 160 positions in the quarter, primarily from its store support center. The savings will be reinvested in digital, e-commerce, marketing, its Team Sports HQ high-school outreach initiative, and in further developing its private brands.

Mr. Stack remarked on the company’s slowed expansion decisions. “We’re very patient about our business; we’re very investment minded. And Wall Street doesn’t necessarily like this, but we’re really making investments and taking strategies; putting strategies in place for the long-term benefit of the company, not necessarily for the next quarter or two.”

DISCUSSION QUESTIONS: How should retailers alter their real estate strategies to adjust to rampant store closings in the near and long term? Should retailers hold off on expansion for the time being?

Please practice The RetailWire Golden Rule when submitting your comments.
Braintrust
"Yes, lease prices may come down, but more importantly I think smart retailers should take a breath and slow their expansions down. "

"Retailers like Dick’s who trade off short-term growth for long-term profitability are playing it right."

"Any CEO that is betting a company’s future on opening new stores should be fired."

In what is rightly being characterized as an overbuilt market, I commend Dick’s management for showing discipline with their cautious store expansion plans. Stack is right that Wall Street won’t necessarily like it, but Wall Street doesn’t like negative comps either and over-building stores is a sure way to get them. With the glut of store closures it is and will continue to be a buyers’ market for real estate. Retailers like Dick’s who trade off short-term growth for long-term profitability are playing it right.

On the button, Mark.

This is a great approach to future-proofing their retail brand by planning and not caving to Wall Street pressure. This approach would greatly generate more profit in a very short window for Dick’s Sporting Goods. Now, when they decide to begin the expansion process and build again, they will be in a great position to shrink store footprint in favor of smaller, more efficient stores. Digital can help supplement the reduced square footage and the need for stocking major inventory.

Fundamentally this looks to be a smart choice — especially given the overbuilding concerns in retail. Dick’s management is showing particular restraint given that the Sports Authority bankruptcy opened market gaps that they would ordinarily rush to fill. It’s encouraging to see smart choices like this.

I feel this is an incredibly wise move. Today, we have too many stores and many retailers are reducing store count as well as their store size or going out of business. Yes, lease prices may come down, but more importantly I think smart retailers should take a breath and slow their expansions down.

Target has already committed serious dollars to renovating existing stores, which is something I feel more retailers should be doing. E-commerce will continue to grow and e-commerce companies are also going into brick-and-mortar. So, Dick’s strategy is intelligent and will let them ride out this challenging time of asking who will still be in business, who is closing many stores, what companies are merging, what company is going through an acquisition and what e-commerce company is now opening stores.

Once all the dust settles over the next few years there will be opportunities for growth and opening more stores, if it is the right move for them.

You have to appreciate Dick’s strategic approach. Make the smart decision, rather than taking a knee-jerk reactionary one.

A major factor in the future success of “stores” will not be just the lease costs, but creating a compelling customer experience across ALL channels. In today’s world physical store success is highly dependent upon digital transformation.

The most encouraging statement from Mr. Stack is where Dick’s plans to invest: “The savings will be reinvested in digital, e-commerce, marketing, its Team Sports HQ high-school outreach initiative … ”

If retailers wait for rock-bottom store lease prices the “Monster from Seattle” will have gobbled up even more share.

I agree with Dick’s strategic approach to expansion. Wall Street loves expansion and announcements of new store openings generally drives stock prices higher. However, any short-term gains that this brings are offset in the longer term when store comps turn south. Managing a public company for the long term takes internal fortitude.

Retailers, especially specialty retailers such as Dick’s Sporting Goods, should absolutely take a very conservative approach with their store expansion strategies. These are indeed turbulent times and the last thing the market needs is a surge of hundreds of new stores. Store growth is commendable however, ultimately, retailers are judged on their overall profitability, sustainability, relevance and their ability to be agile, flexible and innovative in today’s digitally powered shopping world.

Dick’s in particular should take strategic steps to continue their paradigm shift to curated streamlined assortments rather than attempting to be everything to everyone. They have always focused on service, providing an outstanding customer experience and knowing their local markets. Their transition and transformation towards having strategic partnerships with Nike, Adidas and Under Armour is underway. Their shift to a greater proportion of private labels is also in full motion.

However there maybe some road bumps and challenges during this transition time. Dick’s would be wise to focus on their ongoing transformation rather than any aggressive store expansion strategies.

Managing expectations takes discipline and guts — especially when it comes to Wall Street and its analysts. It’s very easy and seductive to paint a pretty picture just to entice shareholders to increase the stock price. Mr. Stack’s approach is commendable and smart given the seismic shift occurring in brick-and-mortar retail. Just adding square footage isn’t the answer. Learning what and how to optimize the square footage you already have is more challenging but will be far more rewarding.

Any CEO that is betting a company’s future on opening new stores should be fired. Prior to the online revolution the U.S. was over-stored by two to three times compared to the next closest countries.

Brick-and-mortar retail is a low-growth to no-growth business. Dick’s is smart and every retailer should wait on the sidelines until they get the best deal on a new location (and the best deals are still years away). And when they get that deal, they should close a store before they open a new one.

I’m surprised they just didn’t do what they needed to do expansion-wise and put clauses in the leases tied to current average rents. In other words, create annual or every-other-year reviews.

One thing is for sure — the retailer is holding the power right now, especially in strip centers. I know one of Dick’s finance executives really well. I know he would have thought about doing that. Of course retail is overbuilt. Of course lease prices are going to come down. But everything is a negotiation. I think there’s something else at play here.

Opening new stores now is not a prudent move. The only exception I can see is those proposed openings where the retailer is already committed to the lease and unable to get out. I spoke with a retailer this morning who voiced the same concerns we are all hearing from our clients. Dick’s is smart to wait to see how things shake out. It is a sad commentary; but it’s best to wait and negotiate a new lease in a location where the space meets your needs after a retailer chooses to leave.

Yes, lease prices for retail real estate will head downward in the near term and even long term. Dick’s is making a great strategic decision to avoid over growth in store count and instead focus their investments on digital, digital, e-commerce, marketing, and their private brands. This long-term approach should help them gain more organic growth without relying on new store openings to prop up their numbers short-term.

While it’s true there are too many stores overall, part of the problem is location, location, location. Perfect example — I can reach over 8 Macy’s stores in about a 90 minute driving radius. In that same distance, I can reach 2 Apple stores, and 2 Dick’s stores. Maybe about 5 Kohl’s, and at least 6 J.C. Penneys. Looking at how each of those brands are performing, what does that store count tell you? Some brands simply got too greedy opening too many stores in close proximity (granted some are through M&A) without considering the long-term sustainability of that business.

There’s a reason, of course, why stores are closing — and why rents are falling — so if someone is thinking “gee, real estate’s cheap, let’s expand” then they should think twice.

That having been said, and realizing that our preoccupation with e-commerce notwithstanding, there are still businesses who are intrinsically tied to physical presence, and many of them are doing quite well, thank you. For some, this is great time to consider expansion and/or relocation. Will the future be an even better time? That’s something people will have to guess about.

Braintrust
"Yes, lease prices may come down, but more importantly I think smart retailers should take a breath and slow their expansions down. "

"Retailers like Dick’s who trade off short-term growth for long-term profitability are playing it right."

"Any CEO that is betting a company’s future on opening new stores should be fired."