​​Is drone delivery really here for Walmart and Amazon? 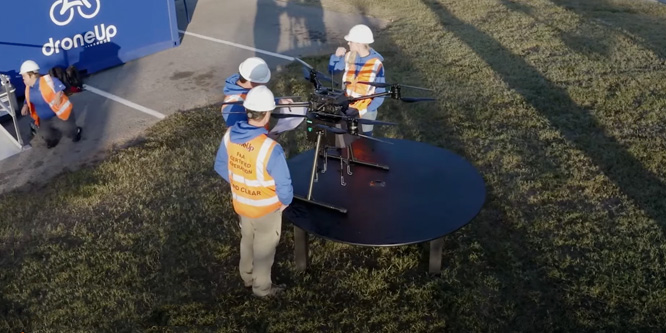 After a successful three-store pilot program, Walmart has launched an aerial drone delivery service in a handful of markets, with plans to expand soon to six states.

Walmart shoppers in cities such as Dallas, Orlando, Phoenix and Tampa can now order products and have them delivered via drone delivery within 30 minutes, with a $3.99 per order price tag, according to Eat This, Not That.

Customers can choose from tens of thousands of goods, including fragile items like eggs, with a limit of 10 pounds per flight, according to Supermarket News.

A demo video from last year made in conjunction with DroneUp shows a package being lowered from a drone to a customer’s front lawn using an automated claw, not unlike a mechanism from an entertainment arcade.

Pre-pandemic, major tech players and logistics companies were working on developing drone delivery to help meet the emerging customer demand for faster last-mile delivery. Amazon and Google obtained patents on numerous drone-related innovations, and in 2017 UPS began testing a delivery truck that acted as a mobile drone base, to deliver packages in the vicinity of where the truck was parked.

Concerns over safety and privacy, however, have continually been voiced as the technology has gone through the pilot stage.

In April of this year, Amazon experienced a huge setback with drone delivery when one of its pilot drones crashed, causing a 25-acre brush fire. At that point the drone program had been in development for 10 years with an investment of $2 billion behind it.

Nonetheless, a representative of Amazon Prime Air in November told CNBC that the company’s aerial drones are slated to begin making deliveries by the end of 2022. The first markets in which Prime Air planned to launch drone delivery are College Station, TX and Locekford, CA. The Amazon drones are programmed to fly to a destination, descend to a height of 12 feet, scan the area for obstacles and, if it deems the area empty, drop the package.

DISCUSSION QUESTIONS: How confident are you that drone delivery will be sustainable and soon scale nationwide? Is Amazon, Google, Walmart or another carrier best positioned to succeed with drone delivery?

Please practice The RetailWire Golden Rule when submitting your comments.
Braintrust
"I am sure drone use will grow and that they have a place, but I see them as niche."

15 Comments on "​​Is drone delivery really here for Walmart and Amazon?"

Drones will work until the “friendly skies” (United Airlines) become “…too crowded…” (Expressway to Your Heart, Soul Survivors, 1967). Then the industry will recalibrate and regulate. Drones will be used in moderation and in certain markets.

Fun fact! I know the Soul Survivors. One passed away in 2021 (not Covid and it could have been a little before), but the other is still alive and kicking.

I wonder how drones fly in really bad weather? I’d bet not well. The hard truth (if not obvious) is that drone delivery at scale would be a nightmare. How could aviation authorities possibility manage thousands of drones roaming the skies? I think the answer is that they can’t. And while drone delivery might make sense for a very narrow set of use cases (e.g. delivering medicine to a remote location), for most other goods it’s hard to see the value. Ultimately, this only makes sense if it can deliver value at a fee that’s profitable for the retailer and, from my perspective, drones at scale just doesn’t fly.

I don’t know about this. I can’t see any retailer delivering packages in places like Chicago or New York — lots of potential issues in regards to crime. Additionally you are limited to the size and weight of products delivered.

In rural areas it kinda, sorta makes sense. Maybe. Of course, there are places where you can get a license to shoot down drones, so they’ll have to adjust those laws.

I don’t expect to see a drone dropping something off on my porch any time soon (or maybe in my lifetime), but out in the country — it might be cheaper than schlepping a truck or van out there. Maybe.

I’m a private pilot, and to enter airspace you must be absolutely proficient or disaster awaits. That being said, I believe that vectoring a drone can be incredibly accurate in flight path, including altitude planning. But this still scares me when thinking about private flight in the busy skies. Will it work successfully for retail? There will be rough edges, God forbid. But in time, the aviation people can get it extremely right. Caution.

I am still not convinced that drones will become mainstream. There are too many issues – weather, overflight, privacy, safety, weight limits, inability to deliver to secure areas, cost, and so forth – that need to be ironed out. I am sure drone use will grow and that they have a place, but I see them as niche.

We’ve been waiting! I was off on my predictions. I thought this would have been SOP in certain markets. Obviously, this is not perfect for every market, but there are certain locations where drone delivery makes total sense (rural and certain suburban areas). You won’t see drones flying around NYC — at least not in the near future. Amazon, as usual, is the leader in this area. Will Google and others create a rival delivery product? Of course! And other retailers will be able to pay to use the technology. Amazon (and others) will create a DaaS model — Delivery as a Service.

Walmart seems to be beating Amazon in the drone race, and it’s not just because of the fiery crash. But the real race will be to provide self-piloting drone service, and that depends on the FAA’s regulations and the big players’ ability to design viable solutions. In the meantime, there’s a big opportunity for video game players to get their license to fly drones. Meanwhile, here’s some math that explain why all the big players are all in on drone delivery. A six pack of beer or a large pizza weighs about two pounds, leaving you six pounds available for snacks and other stuff. All this delivered for $3.99 within minutes. Porch pirates (and pilots), start your engines. But let’s not kid ourselves. This is fraught with challenges. It sounds cool, but the reality is that it can’t scale — yet. This is bleeding edge when we just need in-stock. I can see lawsuits, wildfires, dead birds, take your pick. Drones are dangerous. Period. They are class action suits waiting to happen, if you can call… Read more »
5
|
0
-   Share

Not confident. At all. This is fun in theory but a long way from scale. I mean, I am sorry, and hope I am not writing like a Luddite, but I am having a hard time envisioning drones instead of delivery vans.

Drone delivery would make sense for emergency medications in rural and/or mountainous areas. But not for chips and beer for the Big Game everywhere else.

I can see it for rural areas, but not in dense urban areas. Definitely a niche and a nice talking a point. I wonder how well the drones work under fleet conditions in terms of maintenance operations and recharge cycles, plus the occasional failures. I guess someone needs to try it to gather the data — Amazon would be good at that.

I’m 100% confident … that it won’t be either. As it mostly seems to be a PR exercise that confers the idea a company is at the cutting edge, it’s perfect because it really is in the future … and will be for a long, long time.

Pilots will continue (double meaning), but many issues need resolution before drone delivery becomes reality. Laws such as trespassing, flight lanes, and line of sight will come into play. Expect lawsuits at first, then criminal cases when legislatures enact trespass rules. No one would want to have drones buzzing over their backyard, especially if their home is in a direct path to a residential area with many drone customers or near a launch site. Lots of kinks in the system before it can become real and mainstreamed. A big commercial hurdle will be line of sight. In the UK drones must be operated within 500m of the launch point and away from residential and commercial properties. Lots of learning to come.

Drone delivery, in my opinion, can be used for items where time is of the essence. Otherwise, the technology will only increase retailer costs while providing no noticeable benefits. Moreover, since most drones lack the ability to detect and avoid other aircraft and obstacles, I’m concerned about how drones would mitigate hazards.

Braintrust
"I am sure drone use will grow and that they have a place, but I see them as niche."