Will Amazon have to ground its drone program? 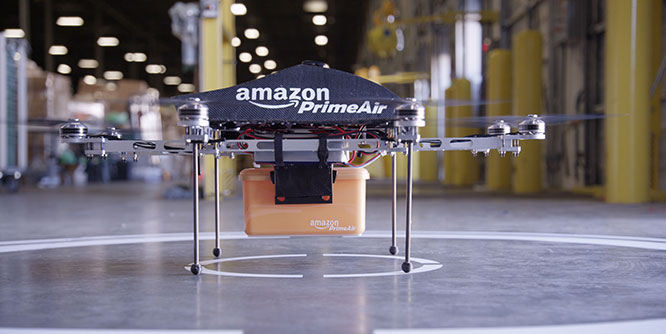 It was not so long ago that package delivery drones, specifically ones from Amazon.com, seemed poised to take flight as soon as the right regulatory bodies signed off. At present, however, the concept of package drop-off via drone is looking like it could be a dud.

Amazon’s drone program is nowhere near taking off despite nearly a decade in development. The company has made a $2 billion investment and has a global team of 1,000 people worldwide working on the project, according to a Yahoo Finance report on a Bloomberg investigation.

Speaking on Bloomberg TV, journalist Spencer Soper described problems with the Amazon drone design. In a test last summer, an Amazon drone experienced a motor failure while in flight and plummeted to the ground despite anti-crash safety features and caused a 25-acre brush fire with the explosion of its lithium battery.

The crash of the drone, which weighs about 85 pounds, gave Federal regulators pause. Still Amazon has not abandoned drone R&D. Mr. Soper sees the ongoing investments as part of Amazon’s desire to shorten package delivery time beyond what has been possible so far.

Amazon’s airborne drone program emerged at a time when the company was beginning to demonstrate ambitions in logistics across the board. At that time, a number of other logistics providers and tech companies began their own drone pilots.

UPS began testing a vehicle in 2017 that would act as a mobile drone base, allowing drones to take off from the vehicle, deliver a package to a doorstep and return.

Alphabet’s Wing Aviation in 2019 began piloting drone delivery of products from Walgreens, FedEx and some small businesses in Christianburg, VA. This month the company launched a similar pilot in Dallas, TX, its first in a major metropolitan area in the U.S.

In 2020, it appeared as though the pandemic might increase the prospects of success for contact-free delivery drones. That year, UPS launched a partnership with CVS piloting the delivery of medicine to Florida’s largest retirement community via flying drone. Uber also began testing food delivery via flying drone.

DISCUSSION QUESTIONS: Do you see Amazon overcoming its obstacles with flying drone package delivery? Are Wing Aviation or other drone technology companies ahead of Amazon when it comes to viably using drones to deliver packages to consumers’ homes?

Please practice The RetailWire Golden Rule when submitting your comments.
Braintrust
"Drone technology will have its place in the supply chain but it is never going to be a vehicle for mass movement of product."

"In Colorado, you can buy a license to shoot them down."

"This is a concept that should have never gone beyond the hypothesis stage."

22 Comments on "Will Amazon have to ground its drone program?"

Drone delivery at massive scale will be highly intrusive and a nightmare to regulate and manage. While I don’t blame Amazon or any other firm for experimenting with drones, it seems that the practical realities of drones at scale is just never going to get completely resolved. And I’m not sure they ever will completely, with the exception of smaller scale implementations where drones make a perfect solution.

I never bought into the drone hype. The idea that customers were going to order online and have packages dropped by drone (on the lawn?) never made sense. If an idea sounds fantastical, it probably is.

A very quick, back-of-the-envelope calculation – the number of packages to deliver, the number of distribution points and delivery points, the number of controllers, variability of weather conditions, mean time between failure, etc. ensures that we would be seeing Amazon drone crash reports in the news on a daily basis. This is a concept that should have never gone beyond the hypothesis stage.

Amazon doesn’t seem like they throw good money after bad. They try many things and seem to cut off the ones that aren’t working. 1,000 people and 10 years suggest they believe in the concept. The progress of delivery competitors suggests confirmation that this can done.

I don’t know where they plan to deploy the drones, but it could answer the question of the last five miles.

Overcoming obstacles is what innovation is all about. If the question of “can Amazon overcome the obstacle of transitioning from books only?” would have been asked at the time they made the move, I’m sure pundits would have said the company should stay in its book store box. While this is complex and may never be mainstream for all deliveries, there is a strong value proposition here to continue to explore.

I don’t know who is surprised or why they are surprised that it’s not “taking off.” At RSR, we’ve had a lot of laughs on this topic, especially when the concept was introduced (the night before Cyber Monday on “60 Minutes”).

In Colorado, you can buy a license to shoot them down.

They’re risky on a good day with anything heavier than a feather.

They eliminate jobs for no good reason.

What could possibly go wrong?

Amazon’s drone program may crash and burn, yet Walmart and others mentioned in the article seem to be going full speed ahead. I would put drone delivery in the inevitability category but it will take persistence, patience, and plenty of cash to scale.

And some heavy insurance premiums.

Eventually, Amazon and others will succeed in developing a drone delivery program and devices that work well. This is about R&D and perfecting a technology. Scientifically, it is possible, probable, and will happen — in a year or two more.

Drone technology will have its place in the supply chain but it is never going to be a vehicle for mass movement of product. Amazon will, if anyone can, overcome its current issues and be back on track. However it must be time to look at the likely returns from this technology – how common will the usage be and how much will it gain them and if it is now seen as just a part player in the market, then why spend further billions of dollars to move it forward? They can get publicity from other initiatives at a lower cost!

Always the innovator, I love Amazon’s entrepreneurial mindset with drones and though it may not take flight, the learnings can be applied elsewhere in the organization. Given so many different dynamics, drone delivery carries a lot of risk. The question is what’s the differential in risk profile of a drone delivery vs. a human delivery? Add in the profit, productivity and customer experience factors and you have a bird’s eye view of the upside/downside potential for the retailer. Clearly there are many companies testing all kinds of drone technology. It will succeed for select products, select retailers and select geographies, but not all. In my mind, it will be niche-oriented.

Drone delivery is great in concept but a nightmare in reality. Imagine the air around your town or city full of drones from different companies rushing to make deliveries. Add in birds, a few people flying drones for recreation and what you have is a recipe for trouble.

Andy Jassy’s shareholder letter refers to Amazon’s culture of learning, invention and iteration, all of which take time and patience. Amazon plays the long game, developing inventive tech well before market conditions are ideal for adoption. Yet, once drones are approved, Amazon will be ready.

With so many tech, logistics and retail leaders investing in drones, it’s only a matter of time before this innovation takes off.

So if a car battery catches on fire or a tire blows out and causes an accident, do we stop driving cars? Of course not! I can’t see one failed drone grounding $2 billion in research, development, and testing. I’m sure there are other failures, but as we begin to achieve success with drone package delivery, it will become more and more popular, as long as it makes financial sense — which it appears to. I predict that two years from now Amazon, Uber, UPS, etc. will have a fleet of drones.

If you’re thinking of lightweight hobbyist drones, of course it would be an epic regulatory and safety nightmare to organize package delivery at scale. But to think that Amazon, UPS, Fedex, etc. are done innovating new methods to get customers their orders is short-sighted. The devices employed and information systems which drive them will continue to become more sophisticated, as long as the customer wants their goods faster, which the customer ALWAYS will. Drone delivery still sounds a bit “Jetsons,” but within a few years we will certainly see more driverless deliveries of one form or another, that’s a given. If future small businesses can employ the services of a company like Wing Aviation, it might even become an advantage which levels the playing field against Amazon’s delivery networks.

I’m a fan of the drone delivery concept in limited, special situations today, but it’s an idea before its time. One hundred years ago I can only imagine the idea of a retailer with dedicated vans delivering packages to everyone’s house didn’t seem very practical or scalable, yet in major metropolitan areas that’s exactly how it is today.

There is enough scale in high density area to make the vans work, but the truth is, dedicated delivery vans still don’t work for people living in remote areas. One hundred years from now maybe drones zipping here and there delivering stuff will be normal, but more likely a better idea for logistics will have been discovered and implemented by then.

From the first RetailWire discussion we had on this, I claimed it was hype, noted it was fraught with huge challenges and public resistance, and unsustainable. If they really spent what they claim, then it should have been resolved by now. Nothing adds up.

And by the way – sidewalk drones are an ultra-niche market as well that have barely done anything. Centuries of human operated wheeled vehicle last-mile delivery are hard to replace with automatons, if for nothing else, entrenched human habits/expectations, but there is “else.”

One might phrase it as “Amazon spent $2B on P/R and image polishing” … and it seems to have paid off. Curious we seem to have heard little or nothing about that crash. Hmmm….

No, they will not halt their strategic drone dreams. But, they will assess and adjust as needed. Keep in mind that the global drone delivery service market size was $520M in 2019 and is expected to reach $9.51B by 2027 for a CAGR of 44.2%. Google and UPS are among the serious players in the field. So, despite the recent news that the future of Amazon delivery is $65 per shipment, Amazon will continue to pursue it. Why? Because Amazon will always, 100% of the time, look for ways to switch labor costs with technology. Period, full stop. Labor, technology, and strategic moats are intertwined in Amazon’s future. For Amazon, labor is an expensive and unsolvable Gordian knot compared to technology’s elegance. Computing power and storage capacity costs per unit are downward sloping. Technology is accurate, predictable, does not ask for raises, can’t go on strike (yet), and is massively scalable. Amazon has crunched the numbers, and while $63 or $65 per shipment is ludicrous, they’ll still look for ways to reinvent the fulfillment and delivery model using… Read more »
2
|
0
-   Share

Braintrust
"Drone technology will have its place in the supply chain but it is never going to be a vehicle for mass movement of product."

"In Colorado, you can buy a license to shoot them down."

"This is a concept that should have never gone beyond the hypothesis stage."