Is it time for Publix to scale its Greenwise Market concept? 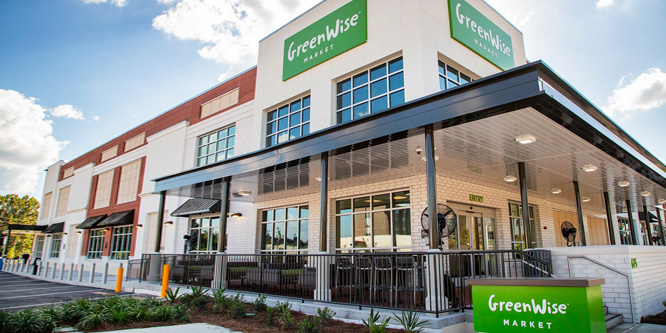 2022 is shaping up as a breakout year for Publix’s Greenwise Market format.

Greenwise Market visits were up 6.4 percent during the month, while Publix’s visits were down 3.9 percent. September continued a trend that saw monthly visits to Publix in Florida decline in June, July and August, even as visits to Greenwise grew by double digits. The time shoppers spent in Greenwise (28 minutes) was also greater than at Publix stores (24 to 26 minutes).

The traffic gains/losses of Publix and its Greenwise concept can be explained, in part, by their relative sizes. Greenwise, with only eight locations, is able to show more significant percentage changes than Publix with its 1,313 stores.

Publix initially launched its natural/organic store concept under the slightly different Publix Greenwise Market banner in 2008, according to the Tampa Bay Business Journal. The concept evolved into Greenwise Market, which began opening store locations in 2018.

Major grocery chains began experimenting with small-format grocery stores early- to mid-way through the 2010s, when such formats emerged as a way to court urban shoppers. Small formats proved able to more easily weave themselves into urban neighborhoods where big boxes would not fit.

Target was having such success with small stores that early in 2020, before the pandemic, it made plans to build an even smaller store concept.

Not all the experimentation with new store concepts, however, has trended in a smaller direction.

In November, Target announced that it was launching a new store concept that is 150,000 square feet, 20,000 feet larger than an average Target store. The new format, which will not be as large as the retailer’s grocery concept  SuperTarget stores, will include more space for food and beverages than a typical big box Target.

In addition to more floor space and an expanded product selection, Target’s new concept has five times the amount of backroom area for the fulfillment of drive up, pickup and ship-from-store orders. Like Target’s popular small, flexible-format stores, the new concept features localized elements. The first new, larger redesigned store opened near Houston.

Please practice The RetailWire Golden Rule when submitting your comments.
Braintrust
"Publix has realized that the shotgun approach to retailing can hide specific niche opportunities."

"There isn’t anything stopping Publix from finding locations to expand their Greenwise Market concept except for the capital expense..."

"For the life of me, I’m not sure why Publix has been slow on the uptake with this concept."

8 Comments on "Is it time for Publix to scale its Greenwise Market concept?"

For the life of me, I’m not sure why Publix has been slow on the uptake with this concept. I first experienced the Greenwise concept when they opened in Palm Beach Gardens, Florida. It was essentially their version of a Whole Foods and it always drew a wide audience. This location might not have been the best, as I see success with this format being all about the demographics. Palm Beach or Jupiter are much better candidates. Just follow the leader here and open where Whole Foods has built the clientele.

By the way, Publix could probably scale its number of Greenwise locations substantially, based on these numbers. But they’d need to be careful with cannibalization with their larger format stores, which are already on every other corner in Florida. Another thing that intrigues me about this is that shoppers spend more time in the smaller format Greenwise stores than in the larger ones. Maybe there’s some insight here that can be transferred to the larger stores.

Publix has realized that the shotgun approach to retailing can hide specific niche opportunities, including the highly profitable and successful organic food and essentials specialty concept. Publix realized that the organic market was growing as witnessed by the success of Whole Foods, Sprouts and others. No doubt these chains were taking share from Publix, so Greenwise is both a defensive and offensive strategy. Greenwise is less about store size and more about developing a mix of products and services designed to meet this niche market. I am always reminded that there are riches in niches.

While the article discusses store size, the real reason why the Greenwise concept is unique is its commitment to organic and specialty foods. Through its short life (four years) Greenwise has successfully fought efforts to make it look more Publix like, with bolt on additions (fried chicken, Pub subs, etc.) characteristic of a traditional Publix.

By staying focused on the Greenwise customer and developing the appropriate offerings for this customer, this concept is very scalable.

One might be tempted to think, as Dr. George does, that a store devoted to organics is scaleable (I agree – it’s not about store size but content). However our local Greenwise in the Atlanta suburbs closed after less than a year and the small format store was converted to a small Publix format instead of a new Greenwise. Shoppers may not be ready for the price and a selection limited to organics.

The key to the success of small-format grocery stores is that they are not just “small grocery stores,” but they have a unique purpose. Publix seems to have figure that out.

Traditional stores were laid out to keep the shopper in the store. If you needed milk, you had to walk to and from the farthest part of the store. They hoped that as you passed other parts of the store, you would pick up some other things. Today’s shopper is not in the mood. It is about time and convenience.

With the discovery and growth of online, shoppers can fill X percent of their needs from their phone, tablet, or computer. They can’t or won’t buy extensive organic or fresh produce online.

Yes, a vast amount of grocery shopping is done in traditional supermarkets, but that is not the future.

Observing Publix Greenwise locations, the key to small format success looks to be to play to high foot traffic and set up the store so that it’s approachable to a tourist without a car. They have also chosen shopping centers or streets that only have restaurants nearby. The nearest grocery store would be a drive away. Target would want to think similarly and show up where tourists would be limited to buying necessities at a CVS.

Depending on the market, demographics, life stage and lifestyle the Greenwise Market makes perfect sense. A healthier set of select SKUs in a more intimate shopping experience is preferred by a select segment of the population. Fresh Market for example caters to the same demographic profile here in the Midwest. There isn’t anything stopping Publix from finding locations to expand their Greenwise Market concept except for the capital expense associated with it plus ensuring that quality standards are achieved every business day.

I’m not sure of the logic of Matt lumping “Greenwise” into the “smaller format” category; obviously, they’re physically smaller than the typical super, but that’s because the organic market itself is inherently smaller (smaller both in terms of SKUs offered and sales potential). More to the point, I don’t believe they’re smaller than their organic peers.
How much potential growth Publix can expect, is based on both how large the organics sector is, and how much they’re willing to temper the organics component with the “essentials” part: the more of the latter they add, the bigger (presumably) will be the audience, but it also dilutes the “green” part … and indeed turns them toward being (simply) smaller markets.

We can assume smaller stores fit more easily into existing neighborhoods and scale if execution is strong. The bigger story here is whether Publix wants to continue to open and operate middle of the road conventional stores, or structure themselves and operate to view each trade area for key market sensitivities with product focus, content and authentic experiences the community wants. For some that will be authentic high-quality/organic stores. In other communities, lower priced and higher convenience fit better. Store size can be a formulaic and helpful baseline, but market fit, focus and product match to customers needs is a more important as a long-term driver.

Braintrust
"Publix has realized that the shotgun approach to retailing can hide specific niche opportunities."

"There isn’t anything stopping Publix from finding locations to expand their Greenwise Market concept except for the capital expense..."

"For the life of me, I’m not sure why Publix has been slow on the uptake with this concept."