Is palm payment past pilot at Whole Foods? 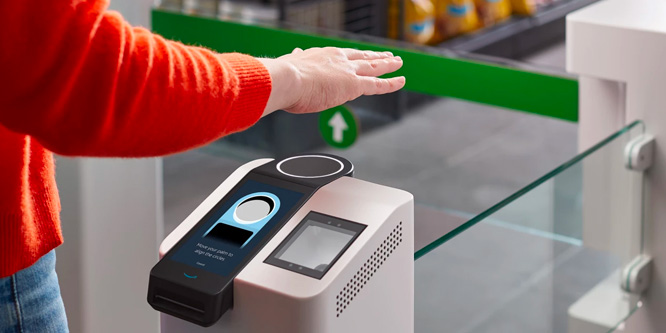 The technology, called Amazon One, was recently deployed in Whole Foods in Austin, Texas,  according to Fox Business. It allows customers to pay by waving their palm over a circular scanner, which associates unique characteristics of the user’s palm with their bank account.

Last year the technology drew the attention of privacy advocates as well as lawmakers. At the time, Senators Amy Klobuchar, Bill Cassidy and Jon Ossoff sent a letter to Amazon CEO Andy Jassy expressing concern about the biometric data Amazon is amassing on customers and how it might be used for advertising and tracking.

Such concerns have not stopped Amazon from continuing its rollout, though. The company originally piloted the technology in 2019 at its New York City Office, and the Amazon One website now shows 40 locations nationwide — including Whole Foods, Amazon Go and other stores — where a customer can utilize the technology to pay.

The expansion of the technology comes as low-touch and no-touch payment solutions continue to appear in retail. Amazon has played a major role in this trend, both in grocery and beyond. Earlier this month, Amazon announced that it will be bringing its Just Walk Out technology to two stores at the Houston Astros’ baseball stadium.

Vendors other than Amazon have also been betting on automating the checkout line out of the grocery shopping process. For instance, college food supplier Sodexo recently launched a fully-automated grocer on the campus of University of Denver, with an eye toward a broader expansion. Students becoming comfortable with the technology on campus could lead to a greater enthusiasm in the general market as they graduate.

Enthusiasm for automated shopping driven by biometric technology has, on the other hand, been mixed. Facial recognition at retail in particular has rubbed some the wrong way. Last year, a consortium of more than 35 civil rights organizations launched a campaign called Fight for the Future to oppose the use of the technology at retail.

DISCUSSION QUESTIONS: Will palm-based identification become a necessary or significantly used part of Just Walk Out technology, or is it a bridge too far for most customers? Do you see the use of this technology being readily adopted by shoppers than when first piloted a few years ago?

Please practice The RetailWire Golden Rule when submitting your comments.
Braintrust
"Some will like the novelty of the technology and others might feel it violates their privacy, similar to facial recognition."

"There are many different contactless ways to pay that don’t involve biometrics."

"Biometrics in the supermarket checkout lane is indeed a bridge too far."

13 Comments on "Is palm payment past pilot at Whole Foods?"

Palm technology is the next step of waving your phone for payment or showing your license for identification.

Many will look at this as something Amazon is trying for their stores. Yes, the stores will prove this out, but the big bucks for Amazon will be licensing the technology so I can pay for the morning coffee I am drinking, my taxi or subway ride, dinner, or entrance to a sporting event.

I propose that most consumers would feel safer with contactless payment via NFC than using some personal physical feature. They both work. They are both fast, but one does not create the possibility of intrusion into one’s physical characteristics.

Palm-based identification for payments doesn’t seem significantly better or faster than mobile payments, which are also contactless. It will likely be a mixed bag of adoption, as some will like the novelty of the technology and others might feel it violates their privacy, similar to facial recognition.

Waving your palm over a scanner to pay for your groceries? Nothing needs to be that convenient.

Agreed. Customers should very carefully consider what kinds of biometric data they’re willing to surrender. It would be naive to assume that governments won’t be interested in this data, or that it won’t have resale value. I’ll keep paying with a credit card.

Every time I hear of this I envision Miss Cleo standing by the exit door reading palms on the way out “I predict you will return this item at a Kohl’s store!”

With the concerns about face recognition and other security threats, this is likely going to be a hard sell in my opinion. Contactless payment from phones or other methods seem like a less complex option, especially considering customers often change which bank account or payment method they want to use.

While palm-based tech adoption will rise, it will take time for Amazon to shape consumers’ habits and earn their trust. Privacy protection, robust cybersecurity and zero data breaches are imperative to ease consumers into biometrics.

Was this a “Palm Pilot?” Sorry. I couldn’t resist.

Seriously, this is very confusing to me. Does a store have both palm reading and Just Walk Out at the same time? And if my phone (and Clear) can use one or two fingerprints, why is my whole palm needed to go shopping?

I like Apple Pay, I like contactless credit card payments, but if I have to lay my palm down to pay, that means I have to put all that other stuff away to free up my hand.

I have a lot of other detail-type questions, but it seems these concepts don’t like to deal with details. I don’t think this bird is going to fly.

There are many different contactless ways to pay that don’t involve biometrics. People are very comfortable in using their phones to make contactless payment but I think any technology that uses biometrics is a bridge to far.

In my comment above, I suggested where and how the palm technology might be used. I completely forgot about a place it is used regularly — NYU Men’s Health Center.

Palm payment is a novelty that some shoppers will like, but most won’t. Consequently, there won’t be widespread deployment nationwide. Biometrics in the supermarket checkout lane is indeed a bridge too far.

I think most people still view fingerprints and biometric data to be the last barrier for commerce since it is so affiliated with law enforcement applications. The fact is all the transactions are tracked the same way whether it is credit card or biometrics is besides the point. I think it is a bridge too far for many consumers if they are given a choice.

"There are many different contactless ways to pay that don’t involve biometrics."

"Biometrics in the supermarket checkout lane is indeed a bridge too far."