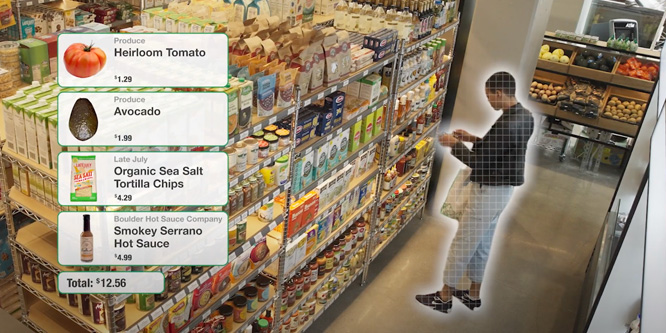 Automated grocery stores have been slowly but surely popping up worldwide since the launch of Amazon Go. Now a checkout-free concept is on its way to college campuses, along with some other new tech-enhanced food solutions for students.

School food service provider Sodexo announced that it will be launching autonomous grocery stores on college campuses nationwide beginning this spring. The grocery concept is called eat>NOW, and one of the first will open on the campus of the University of Denver on April 6.

AiFi, the vendor Sodexo is partnering with to implement the autonomous grocery stores, makes a turnkey solution that allows retailers to launch completely checkout-free stores similar to Amazon Go, according to TechCrunch. The solution relies on artificial intelligence and computer vision.

Earlier this year Aldi partnered with AiFi in the UK to launch its first checkout-free location in London, according to Retail Technology Innovation Hub.

Colleges are becoming a popular place for other kinds of automated and robotic retail technology, as well.

Rolling delivery robots, for instance, are in use on college campuses throughout the U.S. While outside of college environments, municipalities have had mixed responses to such robots due to potential public safety concerns, college campuses may represent a more controlled environment where the robots can roam.

Last month the University of Tennessee joined the list of schools deploying rolling drones for food delivery on its sidewalks, according to a local news report. The vehicles are made by Starship Technologies.

In 2019, Starship Technologies was operating on 20 college campuses in 15 states when The Verge reported that it was expanding to four new schools.

DISCUSSION QUESTIONS: Do you expect that the reaction to autonomous grocers on campuses will be different than in general markets? How valuable are campuses as testing grounds when considering technology for general use?

Please practice The RetailWire Golden Rule when submitting your comments.
Braintrust
"College shoppers won’t reflect the average shopper outside of the controlled college campus environment, but it’s a good way to stress test the technology and concept."

"This is a great demographic to test on as they’re the future consumers. Get them while they’re young!"

"This move by Sodexo will add pressure on other campus dining providers to offer a similar service. I would expect a lot of visits by its competitors to these locations."

This is the ideal testing ground for autonomous grocers. With a 100 percent tech enabled, savvy population, automation and digital services will thrive on campuses as these early results indicate. This makes campuses extremely valuable testing grounds for new technology. I expect to see other technology providers also looking to campuses as critical testing grounds prior to launching to the general public.

I say “ditto” with one addition. This is the demographic that can game the retailer. Caveat venditor.

Excellent addition, Bob. I completely agree — the demographic skew must be factored into any decisions about how the technology gets deployed in the broader market.

The only real question here is why did it take so long to do this? I expect the response will be overwhelmingly positive, and will set expectations as students enter post-college life.

Campuses are ideal tech testing grounds, as young consumers are not shy about sharing candid feedback about the user experience. If companies can adapt to college students’ discerning technology expectations, they’re more likely to succeed in general markets.

College campuses represent a great testing bed for new technology, especially, robots, drones and cashier-less technologies. Our young digital natives will be all over this. Maybe too much, as I feel for the parents of college students (me included as I have one still in college). With Just Walk Out tech, I’d be willing to bet the average receipt is going to climb astronomically!

As a former university professor, I can attest that college students are “human eating machines.” Years ago our campus piloted a sliced pizza vending machine in dorms. It failed. Not because of demand but because supply (stockouts) was the problem. As noted, technology has changed but food demands have not. Students don’t carry cash. They use a combination of credit and debit payments, including Venmo to complete transactions. Campuses are terrific testing labs for food shopping concepts. Students today will become tomorrow’s graduates with the accompanying tech knowledge and income to ensure they are a preferred target market.

You had me at “ramen.” This concept is ideally suited to the hectic, high tech and 24-hour world of college campuses. I suspect this will be an excellent testing opportunity – and it will be very popular.

I believe this could be a loss prevention nightmare. College students have little disposable income and are apt to try to game the system. Opening these stores on college campuses is not a reflection of how they will perform in the real world but it certainly will capture the minds of the students as they graduate and enter the general population. I’m not a fan.

College students are more likely to embrace cashierless checkout than other demographics. College campuses are also a great testing environment because if there is a way to game the system or trick the technology, students will find it. College shoppers won’t reflect the average shopper outside of the controlled college campus environment, but it’s a good way to stress test the technology and concept.

Cashierless stores on college campuses? This will cause a tsunami of success and implementations across the board. Make no mistake, this will be used! And this will spread like wildfire. SMART move. And by the way, what a great field for testing new products.

This is a great demographic to test on as they’re the future consumers. Get them while they’re young! You definitely have a digitally savvy consumer here, but the test for true scalability needs all customer formats. This is likely a better use case for metropolitan areas.

The contracts to run campus dining are often tied to the provider being willing to operate the small c-stores on campus. This move by Sodexo will add pressure on other campus dining providers to offer a similar service. I would expect a lot of visits by its competitors to these locations.

We do annual research in the customer service/experience world. Customers are willing to go digital for their needs, especially younger customers (Gen Z and Millennials). Moving to the retail world, which includes autonomous grocers, it’s natural to focus a digital experience at the college campus which is a predominantly younger demographic.

Campuses offer a great opportunity to test out technology and usage for autonomous grocers. The environment is defined and the population is mostly younger and more apt to successfully navigate the technology. Any hiccups will be worse in the general population.

Though a bit dated, 2011 Pew Research shows that college students are over-indexed to be early adopters of emerging tech. This suggests they’re usually a bit ahead of the curve in trying out new tech and concepts – including autonomous grocery. As a testing ground campuses would be a great option for companies – primarily because they are typically lower cost and available in large numbers (just under 20 million in the U.S.). College students are less biased with respect to most technologies. Some drawbacks are limited resources and available cash and limited exposure to post-college living conditions. Depending on the type of technology to be tested, they are still a great starter group to include in testing. Last point – college students will be future customers anyway for many new technologies. This means introduction to new tech becomes a pre-marketing exercise as well, especially when there is user education involved.

One should never forget that these college students will eventually be regular shoppers. They will surely wonder why where they shop post-graduation can’t be as forward thinking as the stores they found in college.

I was personally skeptical about autonomous grocery until I tried it. This will be huge on campuses – the convenience, time savings, and “new tech” fun factor are exactly right for student life. It’s better not to think of campuses as “testing grounds” – these are adults with the same marketplace “problems” as any shopper. The reason auto grocery will work there is because it’s a perfect solution for that shopper’s needs. Other new tech integrations on campuses will work or not work for that reason only.

Colleges are a great place to try ideas because it is a more consistent environment than the public markets. Also college shoppers will likely put up with problems easier than the public as they want quick service and are more flexible knowing they are on the cutting edge of the new trend of automated shopping. For these reasons, college campuses are also ideal testing grounds. Lessons learned can be applied to the general public with the modifications necessary.

My niece has been using a form of self check-out on her university campus for the last several months now and loves it. The platform also integrates in various food options she can pre-order or help plan for her day. Given this audience is most comfortable with mobile technology, they are a great for testing and trial before others.

Braintrust
"College shoppers won’t reflect the average shopper outside of the controlled college campus environment, but it’s a good way to stress test the technology and concept."

"This is a great demographic to test on as they’re the future consumers. Get them while they’re young!"

"This move by Sodexo will add pressure on other campus dining providers to offer a similar service. I would expect a lot of visits by its competitors to these locations."