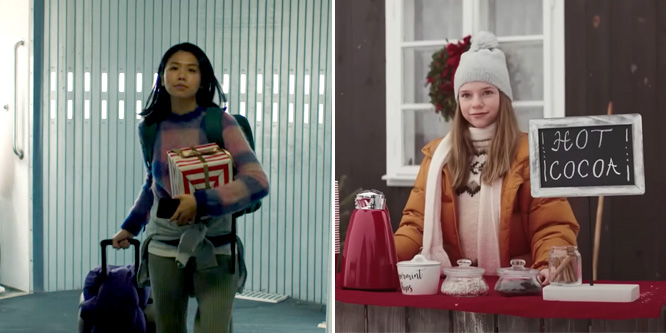 Is it Christmas yet? Walmart kicked off its holiday sales promotions on October 1. Target’s Deal Days launched on the sixth. Amazon.com ran its Prime Early Access sale five days after that.

The need to stand out is critical as retailers go through a holiday sales season that is “anything but typical,” according to Jack Kleinhenz, chief economist at the National Retail Federation. The trade group has forecast that industry dollar sales, excluding auto, gas and restaurants, will increase between six and eight percent over last year’s 13.5 percent gain.

One thing that retailers are doing in typical fashion is Christmas commercials. They have turned to their ad creatives to communicate messages that frequently tug at consumers’ heart strings with the goal of opening their wallets in the process.

The 2022 RetailWire Christmas Commercial Challenge (year 10 of our annual event) kicks off today with two different approaches to holiday marketing from Etsy and Hobby Lobby.

Etsy’s “To the Travelers” spot pays homage to those hitting the road to see loved ones for the holidays. It’s a timely theme — the travel industry reports a resurgence in consumers taking trips after years of staying home due to COVID-19 safety concerns. Airline ticket sales as of September were up more than 56 percent year-over-year and nearly 11 percent higher than in 2019, according to Mastercard Spending Pulse, CNBC reports. Travel spending is expected to remain high through the end of the year.

Hobby Lobby’s  commercial tells the story of two young girls, hot chocolate and its organizational belief that “Christmas Is What You Make It.” See what the spot’s featured characters make of it.

DISCUSSION QUESTIONS: What is your critique of the Christmas spots from Etsy and Hobby Lobby? Which retailer does a better job of connecting with its core customers while reaching out to new shoppers with its Christmas spots?

Please practice The RetailWire Golden Rule when submitting your comments.
Braintrust
"Etsy is the mushy joy of Christmas – Hobby Lobby doesn’t say much to me. I’ll take mushy any day for a holiday season ad."

While I don’t quite have the disdain for HL that you do — not quite — this pair of ads seemed like a political metaphor: one looking like Xmas “Holidays” as the UN would have us celebrate itthem, and the other … well … the snow wasn’t the only thing that was all white.

Etsy is the mushy joy of Christmas – Hobby Lobby doesn’t say much to me. I’ll take mushy any day for a holiday season ad.

This is a tough one because neither commercial screams Christmas.

The Etsy spot could be any time of the year, but I was touched by the last vignette of the girl and her father. He’s so happy to see her. Then I thought that snow globe would be the perfect gift, until I looked it up. It’s over $600. I also found this commercial to be dark, making it hard sometimes to see what was going on.

The Hobby Lobby commercial features two cheesed off little girls trying to outdo each other to sell hot chocolate. Sure it’s loaded with holiday decor you can get at Hobby Lobby, but in my book it’s not very cheery.

Frankly, I am not a big fan of either commercial but if I had to pick I would give it to Etsy.

Seems like visiting Pops and buying the gift are an either/or!

Etsy’s spot is an inspiring play on conquering distances, be they across oceans or generations. Etsy also reflects a more inclusive world and connects emotionally and visually. Hobby Lobby does little to communicate with the audience as it treats relationships as competitions to be won or lost. Sure you have the snow, the lights, and the decorations, but the story is shallow and uninviting. Etsy wins!

While both spots resonate with creative consumers, Etsy reflects growing demand for diversity in retail (all year round).

Neither commercial will make the finals of this year’s commercial challenge. Having to select one of the two my vote would be for the Etsy commercial.

So this is like the Academy Awards, where the start of the show is just a buildup to the “real thing”? Sorry, but two duds here; while taking almost polar opposite approaches (no pun intended) — the Etsy spot brimming with multiculturalism, almost self-consciously so, and the HL spot straight out of a Frank Capra movie — both nevertheless shared one fatal fault: they told me nothing about the retailer or why I would shop there (“Who’s Etsy? Some travel agency?” would be a likely question from someone not already familiar with them). Hopefully upward from here, otherwise it will be a loooong Holiday Season (but not in the way one would want).

For a variety of reasons, Etsy is the winner in my book. Hobby Lobby’s all white competitive world did not scream Goodwill to me at all.

Braintrust
"Etsy is the mushy joy of Christmas – Hobby Lobby doesn’t say much to me. I’ll take mushy any day for a holiday season ad."