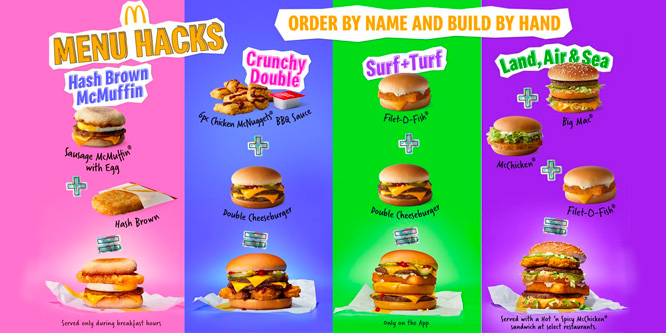 McDonald’s recently announced that for a limited time, starting today, January 31, patrons will be able to purchase four special menu items via a new “Menu Hacks” section of its app, or at participating restaurants.

These franken-order offerings were inspired by some of the chain’s most frequent and loudest customers on social media. Interestingly, the customer must assemble the creation themselves from individual meal items provided that serve as the components for the hack.

This whole approach demonstrates a new, unique twist on the meanings of “social listening,” “user-generated content” and “co-creation.” Consumers are constantly interacting with brands in unexpected ways and the hacks menu is a nod to those innovating post-purchase. Selling these items under a special designation gives credit to customers’ craftiness while acknowledging the power they hold.

There are also some smart spins on loyalty embedded within this program. QSR growth usually operates inversely to grocery. In the grocery space, there’s often more opportunity in leveraging loyalty to drive larger baskets, whereas in QSR, the obvious opportunity comes from gaining order frequency. In selling the hacks as all the required meal items together, this program inherently maintains an increased basket. That basket is further increased by the fact that the new deal’s scheme is centered around the hacks menu options, which add in other items and/or drinks.

Three of the four hacks are associated with promotions that are dependent upon where they are ordered from McDonald’s app or from UberEats. This move means differentiating the delivery channels, allowing for cleaner data analytics, incentives for using McDelivery and benefits to UberEats for being a partner.

The brand has partnered with several TikTok influencers to advertise the hacks, building off the momentum it gained with Gen Z through its most recent celebrity partnerships. The strong influencer connection to this campaign begs the question of what mass crowdsourcing from every day visitors could look like. Considering that the chain launched its loyalty program just last year and is relying so heavily on its app and TikTok presence to promote this initiative, there seems to be an abundance of potential for more hacks menus in the future.

McDonald’s last week reported that its 2021 U.S. comparable sales climbed an impressive 13.8 percent (14.3 percent on a two-year basis). The company credits much of its success to its focus on “the 3D’s”— digital, delivery, and drive-thru — all of which are relevant to the Hacks campaign.

DISCUSSION QUESTIONS: What can retailers learn from McDonald’s hacks menu program? What could McDonald’s improve the next time it offers a hacks menu?

Please practice The RetailWire Golden Rule when submitting your comments.
Braintrust
"McDonald’s Hacks promotion is creative and cute. But I wonder if they would generate more sales by making a better burger?"

"Now is not the time to be running a Hack menu promotion. It might create some good marketing buzz, but what does it do to serve the core customer and the overworked employee?"

"These are a lot of food — I mean, I am a big eater but even I think a sandwich with a beef patty, chicken patty and fish patty is a lot."

McDonald’s has taken a page out of the Starbucks playbook and tapped into social trends. At Starbucks, users have created their own drinks such as the Betty White Frappucino, Harry Potter Pumpkin Juice, the Squid Game Frappucino, and the Medicine Ball (great when you’re sick).

For Starbucks this is normal. Starbucks offers 87,000 different combinations of coffee drinks. Is there anyone that can’t get what they yearn for on a particular day?

QSR restaurants have historically been very creative in developing campaigns that keep customers interested in coming back to try something new or different. The McDonald’s hacks menu will intrigue some customers to want to build their own sandwich combinations. It is somewhat similar to In-N-Out Burger’s “secret menu” that leverages existing ingredients to enable customers to create their own special combinations.

These are a lot of food — I mean, I am a big eater but even I think a sandwich with a beef patty, chicken patty and fish patty is a lot. But I guess people order them regularly?

Wendy’s has their quadruple Baconator, In-N-Out has their 4 x 4 … You will be surprised especially when a sports team comes through…. For the record, I did an In-N-Out 4×4 once and I didn’t eat for 24 hours afterwards, LOL!

McDonald’s Hacks promotion is creative and cute. But I wonder if they would generate more sales by making a better burger?

Menu hacks are a great way to capture and hold the customer. Starbucks and In-n-Out have had “secret” menus for years; McDonald’s is just making it public. The question is whether by “outing” that menu it will lose its luster for regulars.

First and foremost, McDonald’s should be applauded for listening to what its customers are saying! And the use of the word “hacks” is a popular term that is new enough that it stands out and is noticed. And this promotion is a great way to refresh the menu.

I agree that these hacks are creative and fun for the intended young consumers. But, it does give me pause in terms of social responsibility. The latest numbers I could find are that over 70% of us Americans are overweight and nearly 40% are obese. I can only imagine how many calories a Big Mac, Filet-O-Fish, and McChicken sandwich combo has. A billion? But, it’s fun 🙂

Wasn’t the Egg McMuffin an early example of a non-corporate/crowd-sourced menu item? McDonald’s has always cast a wide net when innovating. While the items I’ve seen don’t appeal to me, they do for their core audience.

My initial reaction was, “Alright, they’re taking a page from the Starbucks hack playbook.” There is a big distinction in the fine print … the customer must assemble the hack themselves, which seems odd and defeats the expectation of ordering and receiving a fully assembled hack. This would be the first area I’d focus on as a future improvement.

I read “…the customer must assemble the creation themselves…” and the last thing I think about is Starbucks or social media. I think about LEGO’s. Yep…LEGO’s. About two and a half years ago I posted a short article on LinkedIn about the lessons the apparel business could learn from LEGO’s. Yep…LEGO’s. It’s all about “assembly required.” The assembly process is immediately immersive and entertaining. Could be apparel outfits, or Star Wars space ships or burgers. “Assembly required” can be fun and engaging. It can also be infuriating, but the retailers that tap into the fun and engaging aspect clearly tap into both a selling tool and a vehicle for building a longer term loyalty relationship with the customer.

Can’t imagine this being a success. Nobody goes to Mickey D’s expecting a creative dining experience — they go for consistently adequate food delivered quickly at a reasonable price. This enhances none of that.

Braintrust
"McDonald’s Hacks promotion is creative and cute. But I wonder if they would generate more sales by making a better burger?"

"Now is not the time to be running a Hack menu promotion. It might create some good marketing buzz, but what does it do to serve the core customer and the overworked employee?"

"These are a lot of food — I mean, I am a big eater but even I think a sandwich with a beef patty, chicken patty and fish patty is a lot."