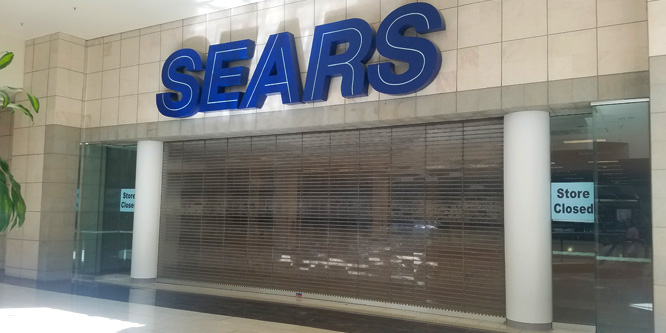 Put a fork in it. Sears Hometown is truly done.

The company, made up of franchisees currently operating about 100 small stores selling appliances, hardware, tools, and lawn and garden equipment, filed for Chapter 11 bankruptcy protection on Monday.

“What is happening here is this company is going out of business,” Mark Minuti, an attorney for Sears Hometown, said yesterday at the first bankruptcy hearing, according to Bloomberg. “Make no mistake about it: this is a sad day for our company.”

The ending of Sears Hometown marks another disappointing and demoralizing chapter in the larger story of Sears under the control of Eddie Lampert.

Sears Hometown, which was spun off by Sears Holdings in 2012, had around 1,250 stores operating in 2014 under the banners Sears Hometown Stores, Sears Home Appliance Showrooms, Sears Appliance & Hardware Stores and Sears Outlet Stores.

CNN reports that Sears Hometown had around 700 stores operating three years ago.

A 2020 Wall Street Journal article found Sears Hometown franchisees complaining about being squeezed by Sears. They reported having trouble getting the inventory they needed and then being penalized if they matched prices for products sold on sears.com. Tom Coulter, a franchisee in Vermont, told the Journal that his store went from being profitable to losing money in four years as a result.

Transformco, controlled by Mr. Lampert, reacquired Sears Hometown in 2019 as part of Sears’ bankruptcy. There are currently about 15 Sears stores remaining, with the last full line store in Maryland slated to close in January.

There is little debate that the end of Sears Hometown, and the all but predetermined ends of Sears and Kmart, are the doing of Mr. Lampert, who for years issued annual missives arguing that retail industry watchers and others were simply not bright enough to understand his grand plan for creating a retailing powerhouse.

Mr. Lampert’s assertions were made during the many years during which he systematically gave away the retailer’s few competitive points of difference through the sale of popular, exclusive brands such as Craftsman, DieHard and Kenmore, while steadfastly refusing to invest in Sears’ stores or turn management over to leaders who actually understood the retail business.

DISCUSSION QUESTION: What is your take on the demise of Sears Hometown? Do you see opportunities for other retail chains to run small franchised or company-operated stores that sell appliances, hardware, tools, and lawn and garden equipment?

Please practice The RetailWire Golden Rule when submitting your comments.
Braintrust
"The problem with Sears Hometown was Sears, and unfortunately the Hometown franchisees were dragged along for the sad and pathetic demise."

The Sears brand has been roadkill for years, so there was little hope for Hometown. There is plenty of opportunity in the small market category — just look at the results of a retailer like Tractor Supply as a great example of how successful small market retailing can be. The problem with Sears Hometown was Sears, and unfortunately the Hometown franchisees were dragged along for the sad and pathetic demise.

How do you fit a reasonable selection of appliances, hardware, tools, and lawn and garden equipment all in one place? Ace does, and its online offerings support it.

Sears Hometown came up with two challenges. Selection, they gave the customer one brand choice per category. And, of course, the Sears brand no longer has any value.

Sears may be gone, but the segment is very healthy. Ace Hardware for one is thriving, ironically, with many brands that were once exclusive to Sears.

There are plenty of small town stores that do well. Some of them, like Ace, operate off a franchise model. Others, like Tractor Supply, are more traditional retailers. And this underlines the point that Sears Hometown didn’t primarily fail because it was a smaller store. Nor did it fail because it was franchised. It failed because of continual failure to invest, to market itself, and to change. It failed because so many of the iconic bands that were once exclusive to Sears were suddenly sold everywhere else. There was nothing compelling about it. Sadly, it’s just another notch on the bedpost of failure that has characterized Sears under Eddie Lampert’s tenure.

It’s a sad day when we see the final flag fall. I remember cutting my retail teeth when Sears was the giant on the streets of America. I think retailers will agree: when non-retailers make a move to control the stores — baton the hatches. We all knew it was coming. Now it’s gone. It seems strange to know it finally.

Every retail exec or owner should be required to have worked at some level in the business prior or retail elsewhere. So many valuable nuggets and lessons about products, brands, customer service and operations are learned well before getting into a board room with big levers to pull.

Sad to see the Sears demise, but it was just a matter of time. Mr. Lampert didn’t understand retail from day one and obviously didn’t learn anything during his tenure as owner. Clearly there are small players winning in the market with appliances and tools. Ace is performing at a high level. True Value is winning in select markets, and plenty of mom and pop stores are thriving. Why is that? Because the owners know retail and understand how to deliver value and differentiated experiences to their consumers.

When discussing the crashing and burning of Sears Hometown the word inevitable springs to mind. First you have a master brand (Sears) that fails to reinvent itself 30 years ago when it might have had a chance. Then you have Eddie Lampert’s “leadership” model which seems to boil down to, “I’m richer than you are so that means I’m smarter than you.” Then you have more sophisticated competition in each of Sears Holdings’ major categories. And, finally, or maybe more correctly first, consumers have moved on while Mr. Lampert and others were busy looking somewhere else. As to whether the idea of franchising big brand stores will work: while I’d never say never in retail, it would require a much better model and a less draconian franchisee contracts.

The demise of Sears Hometown isn’t surprising considering the slow death of the Sears brand itself. There is only a small handful of Sears stores still doing business, and Kmart is essentially dead. This didn’t need to happen — despite all the competition, and the evolution of retail to an omnichannel model, the Lampert model involved bleeding the company’s assets instead of running a business.

It has been painful to watch Sears’ inexorable demise, particularly for those of us who used to work there. Management is conducting the epitome of business malpractice.

The demise of Sears has been destined for a very long time. That they’re taking these steps is sad – but nothing here is surprising. Could it have been a viable option? Perhaps. Ace Hardware stores do exceptionally well serving small markets.

A long time ago my IBM sales team made calls on Sears when it was still in the “Sears Tower” building in downtown Chicago. Even then, when it was successful, having that many workers in a downtown location did not feel optimal. Then they got purchased by an executive with no retail experience, and the Sears story just keeps getting sadder. So my take is, nothing associated with the Sears brand is surprising.

As for other opportunities, isn’t that happening right now under the “Ace” and “Tru Value” brands, with the “large appliance spillage” going to Home Depot and Lowe’s?

What exactly does it mean when a company that seems to be made up entirely of franchises goes bankrupt? Given that there seems to be only the name tying them together, how is this even possible? Whatever: I wouldn’t read anything into this for other retailers, Sears remains a singular case; happily … and not.

Hard to operate a business, let alone be profitable if you give up the crown jewels of differentiation, and don’t invest into the experience. A sad state for a once proud brand, Sears being the original “Amazon” many decades prior. This entire collapse is a good case study for high school and college business classes as to what not to do.

Ace Hardware franchisees look to be doing a good job at convenience, selling an ample offering of hardware, tools and lawn equipment in community-based stores.

Eddie Lampert should be held accountable and the US Bankruptcy Courts should not allow him to abuse the bankruptcy system … yet AGAIN! He should now have to pay out of his own pocket to creditors for his own lack of retail knowledge.

Braintrust
"The problem with Sears Hometown was Sears, and unfortunately the Hometown franchisees were dragged along for the sad and pathetic demise."