Robots and drones and Walmart’s supply chain, oh my 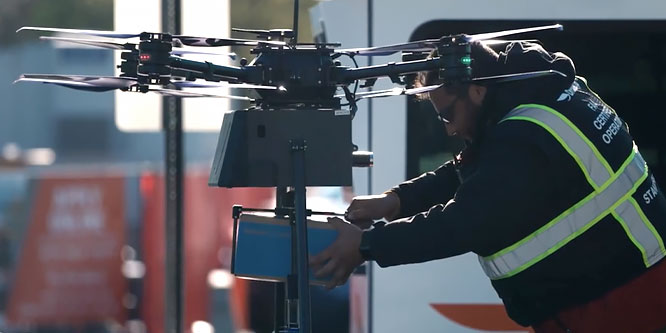 Walmart is motivated to get automated.

Walmart’s decision to complete its rollout of robotics and software automation platform from Symbotic has been heralded as nothing short of transformational for its supply chain operations.

Robots in the distribution centers sort, store, retrieve and pack freight onto pallets. The initiative is designed to move products from DCs to stores with a greater degree of accuracy and speed than ever before.

Walmart’s previous system was set up to cross-dock or warehouse product that arrived at its warehouses until it was needed in stores. This process was handled manually by warehouse personnel. When stores were ready for the merchandise, DC workers would have to figure out how to efficiently pack a 53-foot trailer, which would be manually unloaded when arriving at a store.

“The need for accuracy and speed in the supply chain has never been more visible, and we’re confident that now is the time to move even faster by scaling Symbotic’s technology to our entire regional distribution center network,” David Guggina, senior vice president of innovation and automation, Walmart U.S., said in a statement.

The process of automating Walmart’s regional distribution system will take time. The company says the retrofitting process will take eight-plus years to complete.

Mr. Guggina, this morning in a corporate blog, wrote that Walmart is extending its coverage area for delivering customer orders via drone.

Walmart will make drone deliveries to 34 sites located across six states — Arizona, Arkansas, Florida, Texas, Utah and Virginia — in partnership with DroneUp. The retailer, which has been running Federal Aviation Administration approved drone tests since 2020, could make more than one million deliveries a year in its new coverage areas.

Mr. Guggina writes that customers have responded both positively and unexpectedly to the chain’s drone service.

“While we initially thought customers would use the service for emergency items, we’re finding they use it for its sheer convenience, like a quick fix for a weeknight meal,” wrote Mr. Guggina. “Case in point: The top-selling item at one of our current hubs is Hamburger Helper.”

DISCUSSION QUESTIONS: What are your takeaways from Walmart’s news about its expanded use of robotics in its regional warehouses and for last-mile delivery via drone? How do these align with other ways the retailer is automating its business?

Please practice The RetailWire Golden Rule when submitting your comments.
Braintrust
"We will see other retailers make the same or similar moves because both technologies work for most merchandise categories and will be getting cheaper."

"The day is not far off when all warehouses will be 98 percent automated."

"The level of automation Walmart has announced is a must-have going forward for every logistics, distribution, and warehouse operation."

17 Comments on "Robots and drones and Walmart’s supply chain, oh my"

The day is not far off when all warehouses will be 98 percent automated. Walmart wants first-mover advantage and has the resources to make that happen. It’s unlikely that drones will be a mainstream delivery tactic but they get attention in ways that robots don’t, so we still talk about them. Automation is the future – and it’s happening now.

Robotics are a must. They certainly require capital investment but they are a very important element in reducing costs over the long term, especially those associated with online fulfillment. The jury is still out on drones. I can see there are benefits, but I am still unconvinced they represent a serious and substantial solution because of execution issues. But as part of the wider push to more efficient fulfillment – sure, they have a role to play and it’s good that Walmart is experimenting.

Walmart had to reach the volume thresholds at which each of these technologies could transition from testing to piloting and into production mode. Apparently, Walmart management is satisfied that it has reached or will have reached those numbers as the deployment proceeds. Walmart will not be the only retailer to make such a decision in the next 12-18 months. We will see other retailers make the same or similar moves because both technologies work for most merchandise categories and will be getting cheaper. Hello Dorothy! Welcome to the Land of Is.

Walmart has been an early adopter of innovative technology to improve customer experiences and operational efficiency. Warehouses are a perfect use case for robots that can perform operations faster and more accurate than humans. In addition to helping to alleviate the problem of staff shortages, robots will help reduce worker related injuries in warehouses. This is a smart move by Walmart and we will likely see many more fast follower retailers leverage robots in warehouses.

I’ve written about this before. Walmart is moving quickly (well, as quickly as an aircraft carrier can maneuver in a canal) to automate the customer journey. What is not mentioned in the above piece is their innovative use of MFCs. Their partnership with this robotic pick, pack, and ship technology is the next wave. This brings things closer to the customer as it automates the store and eliminates the store picker clogging the aisles.

By the way, who coined the term “weight appropriate”? And why does that seem totally connected to the fact about Hamburger Helper being the top seller at one of Walmart’s hubs?

Robotics and automation in the supply chain are inevitable. Walmart is the leading retailer for a reason, they stay at the forefront of the industry and invest in the future. Drones are nice, but there is much to work through before they become a real competitor in the delivery service industry; driverless vehicles, however, are here and are sure to make their tire marks soon. This all raises the question: what happens to the delivery workforce?

This time at least, delivery automation probably won’t put drivers out of work, considering just how short-staffed every transportation aspect from long-haul to local is and will be for the foreseeable future. Bigger question: how are Walmart and DroneUp going to staff for aircraft maintenance and operator training, and how much of a limiting factor will that be to their expansion plans?

Automation and robotics are an absolute necessity to reduce the cots to serve, reduce inefficiencies, optimize processes, and mitigate the last-mile challenges. Walmart’s significant investments in robotics, AI, and automated processes will pay substantial dividends for the fulfillment journey.

While automation and robotics are driving economies of scale and efficiency, the drone delivery model will require more work. As drones become more advanced, socially accepted and, most importantly, safe, we should expect this delivery model to scale up and for Walmart and their competitors to invest in this space.

Walmart’s robotics and drone expansions are the latest examples of the retailer taking the lead, playing a long game, and leaning into strategic partnerships. The drone expansion will generate plenty of naysaying initially, yet Walmart is poised to singlehandedly accelerate drone adoption on both the consumer and retailer side. Walmart’s big robotics shift will further separate Walmart from the supply chain-addled pack. In this environment every advantage counts and Walmart has the deep pockets to test, learn, and deploy at scale.

OK, I’m cool with the drones, but “now is the time to move even faster by scaling Symbotic’s technology to our entire regional distribution center network,” which may take eight years? Eight years? This could be a bumpy road at times; that means eight years of solid and continual changes in this solution-changing world. We’re talking a major project. I tip my hat to Walmart for continuing to change and explore solutions.

The fundamental takeaway is the enormous financial and time investment required to identify, select, and retrofit a supply network. This strategic multi-year decision commits Walmart to accelerate product flow and reduce its labor pool with leading-edge robotics, which raises the bar for the competition. On the drone side, Walmart has been experimenting for two years and appears to have settled on DroneUp. Current FAA regulations call for line-of-sight deliveries, limiting the range to about 1.5 miles versus DroneUp’s range of 3 miles. Walmart and Alphabet’s Wing have leapfrogged Amazon in the drone delivery wars.

Robots in every distribution center, yes — drones, no. Drones for Walmart may be ok, but when more and more retailers begin to use them, the issues that have been discussed previously in RetailWire will occur and everyone will say “how did we not see this coming?” This will be especially true in urban markets.

I would posit that how many drones someone is using means next to nothing in an intelligent evaluation of how automated someone’s operations are.

As for the rest: all the major players are aware of what competitors are doing, and each is pursuing what they feel is the “best” policy (for them, anyway).

The level of automation Walmart has announced is a must-have going forward for every logistics, distribution, and warehouse operation. While it may seem like a costly investment over time, (kudos to Walmart for announcing an 8-year buildout and selling it as a positive) it’s now a necessity for efficient operations and will result in lower overall costs long-term than simply relying on bringing on more human labor.

Drone delivery has taken longer to reach a mainstream use case than originally promoted by many, but we will see this increasingly in rural areas and areas where it can result in lower-cost deliveries than running delivery trucks when gas is at such soaring prices.

Automation will be increasingly prevalent not just at Walmart but at every retailer over time. It’s already happening, and it will allow for more customer-facing and high-value human interaction with retail employees and store teams.

I love this. Automation is likely to accelerate given labour shortages in many economies. It is great to see Walmart taking a lead in this and it is fascinating to see that in the same week Dyson announced that they are investing in domestic robots to help you at home by 2030.

Other retailers are likely to watch and follow Walmart — but also longer term, such is the scale of Walmart, they are likely to benefit from economies of scale that Walmart will create as they move forward.

Last-mile delivery via drones is great but I am concerned about the regulations concerning the use of drones. Other than that this move seems like a fairly logical step in Walmart’s automation journey.

Braintrust
"We will see other retailers make the same or similar moves because both technologies work for most merchandise categories and will be getting cheaper."

"The day is not far off when all warehouses will be 98 percent automated."

"The level of automation Walmart has announced is a must-have going forward for every logistics, distribution, and warehouse operation."