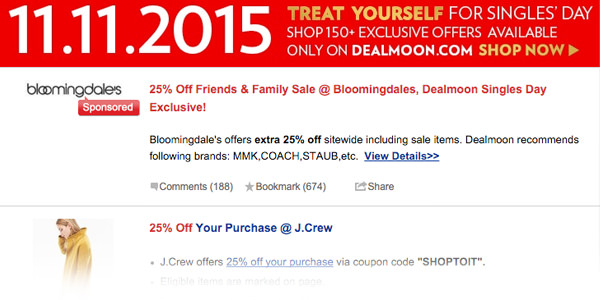 Singles Day is huge in China. Just ask Alibaba, which reported sales for the day reached $14.3 billion, a 60 percent increase over the same day in 2014. Alibaba rang up $5 billion in sales within the first 90 minutes.

Alibaba first debuted the Singles Day event on Nov. 11, 2009 in China, which each year reaches more and more people from around the globe.

In the U.S., Dealmoon.com, which bills itself as the "Kayak of Luxury Brands" and largely caters to Chinese-Americans, has seen the number of brands participating in its Singles Day event grow from 30 in 2012 to 150 this year.

Earlier this week, Dealmoon co-founder and CMO Jennifer Wang said, "In 2014, Singles Day sales quadrupled that of Cyber Monday to become the world’s biggest online shopping day ($9B vs. $2.65B). Singles Day is becoming a topic of conversation in the U.S. with retailers providing offers for a few years now. This year, the depth and breadth of offers are unprecedented; the Singles Day event on Dealmoon will bring three million people to our site."

Do you see U.S. retailers making Singles Day their own in the years ahead and expanding it beyond a sales event primarily targeting Chinese-Americans and Chinese immigrants? How would an expansion of Singles Day in the U.S. affect the holiday selling season?

Please practice The RetailWire Golden Rule when submitting your comments.
Braintrust
"Retailers will make any feasible day a special day if it will increase turns and lift channel visits. After this Singles Day gets old we will shift to Divorced Day, then Affair Day then Lousy Husband Day. What we are really missing is DUDE DAY! We have Father’s Day, but even a Dad can be a DUDE!"

"I don’t think so. In the U.S. we self-gift all year long. Who needs a holiday?"

"Like the sadly named "Soup For One" which inspired a movie and song, Singles Day would need to be reframed to gain acceptance here."

I can’t see Singles Day expanding in the U.S. simply because it shares a date with Veterans Day. While Memorial Day and Labor Day have been co-opted as the start and end of summer, Veterans Day remains a day to show appreciation for those who have and are serving in our military — that makes it a little difficult to buy into something as self indulgent as Singles Day. Retailers would be better served by adding in “Treat Yourself” promotions throughout the holiday season.

Retailers will make any feasible day a special day if it will increase turns and lift channel visits (store or online). After this Singles Day gets old in North America we will shift to Divorced Day, then Affair Day then Lousy Husband Day. What we are really missing is DUDE DAY! We have Father’s Day, but even a Dad can be a DUDE! I am waiting for DUDE Day!

Gee, another reason to have a sale in November. Of course American retailers will take a closer look and many will embrace Singles Day. Black Friday has already been diluted by retailers offering Black Friday deals as early as November 1, so why not offer special deals on another day prior to Thanksgiving?

I don’t think so. In the U.S. we self-gift all year long. Who needs a holiday?

The holy grail of retail is the sale. Why not another gift giving day?

Many retailers have been successful with the lunar (Chinese) New Year. The challenge is that it definitely has a cultural heritage context and U.S. customers have already overspent by the time of the lunar new year in January.

With online already diluting Black Friday and Cyber Monday deals, Singles Day might be another opportunity to promote a special dimension within the U.S. holiday gift giving cycle.

When transferring a holiday from another country/culture, retailers need to provide some context of the holiday in order to make it successful. On the surface at least, Singles Day seems congruent with U.S. holiday gift giving if positioned properly. Actually, I’m surprised not to see some retailer ads for Singles Day already.

I’ve had dinner with a bunch of very senior retail leaders in the past few days, and everyone was excited about Singles Day. And why not? American consumers have reacted favorably to other manufactured events, like Halloween, so why not this? It’ll be interesting to see how retailers position themselves around this new sales event.

The U.S. is a different cultural market than China. I am not convinced this would be a success, in spite of the increase in the number of single people.

Other names: Independence Day, Individualist Day, Maverick Day, etc. We would need a name that speaks to fierce individualism, rather than lack of partnership.

This would work if it was on a different day but being on Veterans Day is disrespectful to our veterans.

It’d sure generate a lot more business than “Married Day.”

Singles Day in the U.S. You do know it falls on 11/11, right? And you know our calendar revolves around a holiday, Christmas?

Even with a hyper targeted message, juice just ain’t worth the squeeze. Look at the reaction to a “red” cup.

With multiple deployments, no draft and continuous war, the respect for Veterans in the U.S. is at an all time high. Not that the VA is in good shape, but “mainstream media” certainly reflects a newfound appreciation for those who serve. Yesterday, Facebook featured an amazing outpouring of personal experiences.

Plus, Veterans Day events have been on calendars for a long time. Sales displacement really didn’t happen. Home categories ticked up, but other categories not so much.

Amazon proved earlier in the year, if you want to drive a spike find a trough. Early July is pretty good. February would be good too.

Or as Confucius said, “retail ain’t for sissies!”

I can’t think of a reason why not!

The date selected has a lot to do with it. But you can bet the house there is no way U.S. retailers are going to let what can be a sales spike slip away.

Most people I know certainly don’t need an official holiday to self-gift!

Many great comments on this already. I agree with most, that of course U.S. retailers will give it a go to increase sales and thus profit. However, I think it will just be a big promotional deal, not a holiday in and of itself! Personally, I wouldn’t consider it an actual holiday if it only started as a way for retailers to make money. If they really want to pick a day, why not move it back three more days to make it exactly six months after Valentine’s Day, which would then also avoid the already occupied day to honor veterans? (I just got a funny image in my head of every restaurant in town being entirely booked with reservations for one.) Some research has indicated that no matter when sales are held around the holiday season, consumers are going to buy what they’re going to buy for the holidays (for others or for themselves) regardless of how early or late the sale is. Maybe that is outdated now, but as a consumer, I know… Read more »
0
|
0
-   Share

Checking the Dead Sea Scrolls, which were primarily about commerce, it appears that in ancient times, the first Friday in November was considered a special market day for bachelors (sorry the Era was sexist), so there is a legitimate historic reference for this too long missed shopping day. Go for it! I’m in — just avoid the special coffee cup decoration or it may be 3,000 more years before this goes into effect.

Another pseudo holiday is not needed here in the USA to encourage more shopping. Because of the ultra conservative Chinese society, and the expensive “push” which Alibaba is putting behind this, it will work in China. However, we don’t need it. We have Black Friday, Black Monday, 4th of July, Back to School, Christmas, New Years, Fathers Day, and so many other holidays that Americans certainly don’t need (or want) another.

I see smart US retailers trying to leverage all non-US holidays and events where possible. Catering to migrants’ shopping habits could have a positive impact on sales. Singles day is another made-up event created to drive sales. So why not use it to drive sales?

I believe the reason Alibaba is successful with Single’s Day is due to cultural issues surrounding China’s newfound wealth, and issues with the disproportionate number of men and women due to decades of the one-child policy, the resistance of young professional women to marry in a openly misogynistic society, and other factors not found in the U.S.

When I read shopping behavior data of Asian consumers and luxury brands there is nothing indicating a “need” to encourage shopping. I think that a “Singles Day” promotion might result on negative backlash from U.S. consumers.

Wrong date, given it is in November with Veteran’s Day/Remembrance Day in Commonwealth which is a solemn occasion and then upcoming Thanksgiving, etc. To an extent, Valentine’s Day is our version of Singles Day. Don’t think it will fly outside of China.

I think it’s another way to manufacture great demand. I don’t think the date or name would necessarily work in the US, but the idea is one that Amazon’s already on to. Their Prime Day got shoppers checking out in large numbers on a day in July that held no significance the year before. Let’s see what next year holds.

Rewarding oneself to feed your own ego or for deeds accomplished seems to be human nature. The fact that Singles Day is done online, and no one may known how you’ve done something special for yourself, is an added benefit. I think Singles Day is a missed opportunity in the U.S.

Given the widespread global attention on the phenomenon of Singles Day this year, we already see U.S. retailers starting to take part in the Chinese shopping event, Singles Day, by using the Alibaba platform. We do see U.S. retailers continuing to involve themselves in Singles Day, but they must remember that selling on one of Alibaba’s sites is a very different experience, logistics-wise, from the sites we’re used to in the U.S. Everything is different, from the conversion funnel, to the payment process, to the way products are merchandised. That’s why going through Alibaba is an opportunity for retailers not to think about how they should do it when they are selling on their own — but to focus on having the stock, the price, and being ready to ship. If a retailer’s goal is to leverage the Alibaba channel to sell on a super savvy Singles Day, it should focus on processes more than appearance. U.S retailers can only benefit from the expansion of Singles Day in the U.S. because Alibaba uses its marketplace… Read more »
0
|
0
-   Share

“Singles Day” is just a “cover.” In my opinion, this is just the Chinese consumer demand for a catharsis; Chinese people also need more and better products to enrich their lives. So only the Chinese people around the world consume on this day phenomenon. This is a big market, but many people are still not aware of it.

Braintrust
"Retailers will make any feasible day a special day if it will increase turns and lift channel visits. After this Singles Day gets old we will shift to Divorced Day, then Affair Day then Lousy Husband Day. What we are really missing is DUDE DAY! We have Father’s Day, but even a Dad can be a DUDE!"

"I don’t think so. In the U.S. we self-gift all year long. Who needs a holiday?"

"Like the sadly named "Soup For One" which inspired a movie and song, Singles Day would need to be reframed to gain acceptance here."