Should Ames be making a comeback? 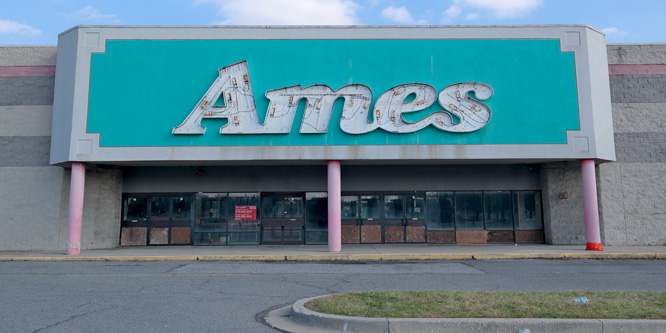 Ames, once the U.S.’s fourth largest discounter that liquidated in 2002, confirmed plans that it will return in 2023 with the opening of seven stores in the New England region.

Cross Moline Ventures is the U.S-based subsidiary of Molyneux Group, a U.K.-based conglomerate founded in 1640 and still owned by the Molyneux family. Molyneux Group acquired Ames’ domains and name as the chain was liquidating.

Founded in 1958 and once described by The Wall Street Journal as the “folksy centerpiece of strip malls in small towns across the Northeast and elsewhere,” Ames peaked at around 700 stores with a focus on a largely rural customer base in smaller, less-competitive markets.

The liquidation was attributed to debt from its acquisition of Hills Department Stores as credit markets tightened. Increased competition from Walmart was also cited.

Asked whether Ames’ traditional approach would be overhauled, Ms. de Molyneux said the company is planning a smaller store branded “Ames Local,” at 80,000 square feet, for more rural markets. The stores will supply basic necessities such as groceries and apparel, with certain locations containing gas stations.

A larger format, at over 130,000 square feet, will cover two floors and also sell electronics, toys, beauty, jewelry and housewares. They will have cafés similar to Hills’ Snack Bar that was known for its slushies, popcorn and soft pretzels.

Added Ms. de Molyneux, “The interiors will feature the original dropped ceilings, instead of the warehouse style open ceilings. There will be tile and carpet throughout the stores instead of polished concrete.”

The return comes as inflation and a potential recession promise to amplify bargain hunting’s appeal, although dollar stores have found a home in many rural markets.

Ames will open stores in Connecticut, New York and Pennsylvania in 2023 where return requests have been particularly loud. In 2024, two stores are scheduled for Rhode Island. Ms. De Molyneux added, “Further expansions still require some research at this time as it is still early days.”

DISCUSSION QUESTIONS: What opportunities and challenges do you see for Ames as the discount chain explores a return to rural and other smaller markets? How should Ames be positioning itself? Should management update the concept?

Please practice The RetailWire Golden Rule when submitting your comments.
Braintrust
"This is the perfect time time to resurrect a chain like Ames. Discount is in, so why not ride the wave? "

"Ames? Now that’s a trip in the Wayback Machine! The original Ames caused a lot of hand-wringing on the supplier side..."

18 Comments on "Should Ames be making a comeback?"

Twenty years is a long hibernation. Ames should emerge refreshed and full of potential. This is the perfect time time to resurrect a chain like Ames. Discount is in, so why not ride the wave? I personally would have chosen Filene’s Basement as it had more cachet. Or, even more symbolic, the old Federated department store, Lazarus! Popcorn? Slushies? Soft pretzels? What time do they open?

Really? It is one thing resurrecting a brand when it has been gone for a year or so. It is quite another resurrecting it after 20 years.

The rationale for bringing Ames back, as described in today’s discussion, is absolutely bizarre. “We’ve received multiple requests for an Ames store over the years” hardly suggests that there is currently a market. How much of the population is waiting at a potential Ames’ door? How much of the rural demographic has even heard of Ames?

What challenges would Ames have? Let’s start with dollar stores and Walmart and go from there.

My head is still shaking.

Is the Ames comeback really being driven by unmet consumer demand? Or is it being driven by excess inventory looking for additional channels if distribution? The comeback seems well timed given the current market conditions, but it will be interesting to see the profile of brands embracing this extension of the discounting tier. And it will be interesting to watch the positioning of the Ames stores relative to local Target and Walmart stores.

The Ames comeback has several things going for it — a loyal fan base, a strong discount retail segment and probably a lot of bargain real estate from closed department stores. It will be interesting to see how they can adapt to new consumer behaviors that are much different than 20 years ago.

I can’t see it. No how. No way. It wasn’t a department store. It was like Kmart. Do we really need another one? Walmart drove it into the ground 20 years ago. I just don’t see why it needs to exist.

Ames? Now that’s a trip in the Wayback Machine! The original Ames caused a lot of hand-wringing on the supplier side (“can we get away with selling Ames without losing our better distribution?”). Walmart crushed them and of course, has only become more of a force since. I don’t see a rationale for this resurrection and given the time that has elapsed, nostalgia is a weak justification.

Another reference to the Wayback Machine! I swear I didn’t read your comment before sending my own but I agree completely with your assessment.

Imitation is the sincerest — ha! Clearly Ames sparked instinctive word choices for us both, Dick!

If “Ames is part of everyone’s hearts,” As Shannon de Molyneux proclaims, they may have a shot. Stores have changed over the years, and I suspect will give any newcomer a very serious run for their money. If they open with with something new in presentations and products, every day will be filled with new opportunities. It is going to be exciting to watch this all unfold.

Dropped ceilings? Carpet? Are we bringing back frost-and-tip kits and blue eyeshadow too?

I feel like this is a trip in the Wayback Machine — Ames brings to mind Bradlees, Caldor, Shopko, Pamida among a long list of regional discounters who closed their doors years ago. These stores faced insurmountable competition from Walmart in particular as it expanded into suburban and exurban locations all over the country, and things haven’t gotten any easier. With the spread of Target, dollar stores, off-pricers, Amazon, and more — does the retail landscape really need to revive a nameplate that failed 20 years ago? I vote “no” on this idea.

A comeback six years in the planning? This Ames concept is a real head-scratcher. The number of stores planned is sufficiently small to test this high-risk venture with no cost advantage or differentiated value proposition in an environment with a high cost of capital and demand uncertainty. There may be a nostalgic factor, but that won’t fuel business growth.

I serviced this account long ago. Nostalgia does not win at retail. This is throwing good money after bad. Sounds like a rural Target with small square footage. There is certainly a lot of real estate to rent at attractive rates, so that is not the challenge. Being relevant, fulfilling orders via e-commerce and making the shopping experience distinctive/worthwhile is the key. What is their unique positioning? Is the name AMES meaningful vs. launching a new store concept and starting fresh?

I think the world can be divided into two types of people: those that have forgotten the name, and those who never knew it in the first place. So essentially this is a “new” retailer, and while success is always possible, I see nothing here to cause us to expect it.

Ames could find success in markets where there are few competitors and middling chain grocery stores. They would be one of the few or only low price games in town.

But going in a market against the likes of an Aldi, Walmart, Target, or another known brand discounter would be a tough road to take. Good luck with that.

Ames has clearly defined its positioning and target market, but one of the reasons Ames stepped back and liquidated in 2022 was due to its competitor Walmart. Walmart still controls the majority of the market, and its tagline “Save Money. Live Better.” clearly indicates that they offer low prices on high-quality items to customers. Furthermore, since Ames was popular in the 1990s, I’m not sure if younger generations remember it.

Braintrust
"This is the perfect time time to resurrect a chain like Ames. Discount is in, so why not ride the wave? "

"Ames? Now that’s a trip in the Wayback Machine! The original Ames caused a lot of hand-wringing on the supplier side..."