Should retailers push Congress for a more robust stimulus plan?

As Congress struggles to find common ground on a second round of fiscal stimulus, it feels like an important time to review the impact of the CARES (Coronavirus Aid, Relief, and Economic Security) Act legislation. The first program totaled almost $1.8 trillion and was delivered through one-time checks to most households, expanded unemployment benefits and the Paycheck Protection Program.

Here’s what we know about its effects.

During March, April and May, $103 billion in consumer spending disappeared. We spent more money on groceries and liquor, but far less on almost everything else. We also know that by June, the Census Bureau’s Advanced Monthly Retail Trade report showed that sales had rebounded to the 2019 June level.

The data below shows total U.S. retail (excluding auto) and restaurant sales from credit and debit card data from my firm, CassarCo Strategy & Analytics, between March and June 2020 compared with the same weeks in the prior year. We see a huge decrease in spending by all income groups in the early stage of COVID lockdowns followed by a sharp rebound in spending as stimulus payments were released. 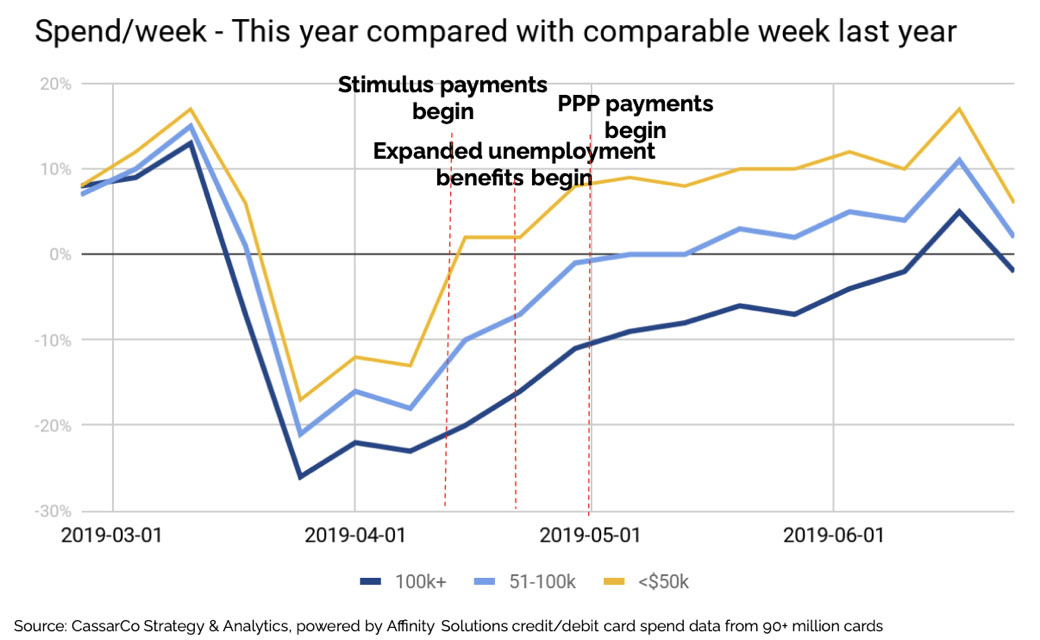 The stimulus was intended to benefit those in lower income groups and we did indeed see a far sharper increase in spending amongst households making less than $50,000 annually (+22 percent compared with +15 percent for households with more than $100,000 in annual household income). The stimulus worked and was a significant factor in June’s rebound.

The Census Bureau will release critical July retail sales numbers on Friday. These numbers include the continued impact of the extra $600 weekly unemployment payments that expired at the end of the month. Anything below July 2019’s numbers ought to shock legislators into quick action on more stimulus. Numbers on par with or better than July 2019  may lead legislators to conclude that their work is done. However, with a national unemployment rate of 10.2 percent, there are millions of workers who have suddenly experienced a $600 weekly drop in income. The trick is that this impact will not be visible until August numbers are released in mid-September.

We’ve seen no evidence that Washington’s work is done. All we know is that the action Congress and the Trump administration took in the spring was effective. This should only double the resolve to continue to support struggling Americans until unemployment comes down to a palatable level.

DISCUSSION QUESTIONS: How effective do you think the CARES Act was in helping American consumers and retailers deal with the initial impact of the coronavirus pandemic? Do you support a new smaller stimulus plan advocated by some Senate Republicans and the Trump Administration or do you think a bigger package is needed for retailers in light of ongoing economic challenges?

Please practice The RetailWire Golden Rule when submitting your comments.
Braintrust
"If I am a retailer or any other business, I am screaming loud and clear, put money in my customer's hands. "

"With unemployment hovering at 11 percent and a wave of evictions approaching, this is no time to pull back on supporting average Americans."

"No Administration can continue to spend billions and trillions of dollars without eventually having to institute some form of increased taxation to offset the deficit."

10 Comments on "Should retailers push Congress for a more robust stimulus plan?"

The various stimulus packages most certainly helped to maintain consumer demand during the lockdown and beyond. Regardless of the politics, the removal of enhanced benefits – especially at a time when unemployment continues to be high – will sap spending and cause demand to drop. That will have a knock-on impact to the wider economy and may make a recovery more protracted.

I do have some sympathy for the view that very high unemployment benefits make it difficult for some people to go back to jobs where they would earn less. However we are still in the midst of a crisis and I think this is the first duty of politicians to protect and look after people. The government insisted on various lockdowns and policies that severely damaged the economy. That’s fine and understandable. But the government now needs to pay up to look after those who, through no fault of their own, have been impacted.

Clearly the CARES Act had the desired impact of providing American consumers with short-term liquidity which was reflected in the positive bump in economic results. However the program is now over and Congress is still fighting over what to do. I believe we’re going to see a negative trend result from the dysfunction in Washington. The government needs to deliver more financial relief and it needs to be done now. If this situation continues for an extended period, retail bankruptcies will seem small compared to the societal tumult the U.S. will experience.

One way or another the government must put money in people’s hands. It doesn’t matter if it is enhanced benefits for the jobless or work projects (read WPA). The economy does not move forward without ALL the government investment necessary to spark the economy. The answer to exactly what not to do is in the history of response to the Great Depression. In 1936, after unheard of at the time, extraordinary deficits, the government cut spending. The result was a significant dip in prosperity and a return to recession. In 1938 the government expanding spending and the economy rebounded. There are a mountain of opportunities that the government can spend money on today that will give the consumer (Consumer is the “C” in GDP=C+I+G+ NX) the liquidity they need to even spend money on just essentials…infrastructure…healthcare…education. We will hear screams about deficits. At this point they are irrelevant. There is no future for the country if the economy doesn’t recover. Here is America’s opportunity to catch up to other developed nations in the measures that… Read more »
5
|
-3
-   Share

Indeed — the fiscally conservative thing to do is to invest in projects with long-term high rates of return while interest rates are essentially zero! Transportation, postal, water, and power infrastructure; job training and school improvements; healthcare and child care — these all multiply the effectiveness of American labor and improve business efficiency. Short term they put everyone back to work; in time they pay off with stronger revenue to let us pay off our debt. Smart for business, smart for workers, smart for families.

Perfectly said. Over the years, I have been very disheartened by the Reagan, Bush and Trump tax cuts. There were so many good INVESTMENTS in the country that could have taken place, thrown away to take money out of the economy.

Recipients of government stimulus aren’t splurging with that money or banking it; they’re spending it on food, rent, and other necessities. With unemployment hovering at 11 percent and a wave of evictions approaching, this is no time to pull back on supporting average Americans. Retail’s trade associations, which historically favor Republican candidates, would do well to consider consumers.

Business relief will have to go hand-in-hand with unemployment relief. The economy is fragile and it is an election year so I expect a robust plan – if they can just keep the pork and wish list out of it – on both sides.

First of all the CARES Act did nothing to help lower the initial impact of the pandemic. If that had been the case it would have been passed in March or April at the latest. So the virus had run well past what Republicans and the Administration seemed to believe was the midpoint of what was referred to as, “Wave One” when Congress got around to passing a relief package. Let’s remember that pre-COVID-19 an estimated 40 percent of all Americans had less than $400 in savings, and that was when they were working. In that light it was too little too late. And of course, Band-Aids aren’t the same thing as stitches. This wasn’t a long-term fix, just a way to placate the public. Will a lower payment stimulate the economy? Sure, for a minute. But then what? We don’t have a vaccine yet. We don’t have a functional federal public health policy. We have politicized things like masks and social distancing to the point that state and local officials are inefficiently playing medical… Read more »
3
|
-3
-   Share

The initial CARES act provided a lifeline to many of the most needy. While it was flawed and there was waste, any such government program hastily assembled and executed was going to have some.

The tragedy in the Cares act was it was supposed to be a bridge to the other side of the Covid pandemic, providing short term highly needed aid to an economy that was “paused” for a few months to beat down the virus. This strategy largely worked in Europe who have “unpaused” their economies. Here CARES was a bridge to nowhere, as we largely failed at coming out the other side and reopening safely. So now we do need another package to prevent further hardship and longer lasting damage to the economy which is a real shame on so many fronts, not the least of which was a $3 trillion spend without the desired result.

Braintrust
"If I am a retailer or any other business, I am screaming loud and clear, put money in my customer's hands. "

"With unemployment hovering at 11 percent and a wave of evictions approaching, this is no time to pull back on supporting average Americans."

"No Administration can continue to spend billions and trillions of dollars without eventually having to institute some form of increased taxation to offset the deficit."