Should Rite Aid put its stores under lock and key? 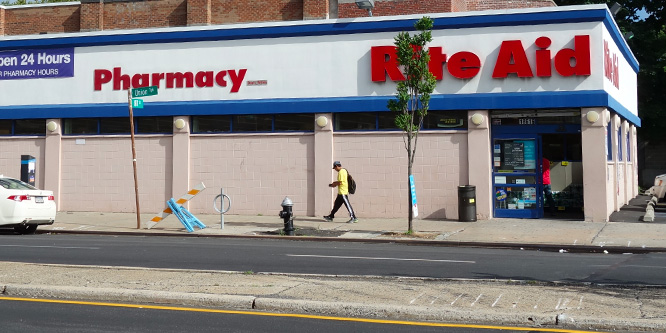 Rite Aid has a shrink problem in New York City and it’s forcing the drugstore retailer to consider taking aggressive measures to keep goods from being walked out the door by thieves.

Andre Persaud, executive vice president, chief retail officer, said that addressing losses to shrink was a priority for Rite Aid as every product stolen represented “a gross margin hit” that was not covered by insurance. He said that Rite Aid’s team has made strides “improving product protection” and is up to the challenge.

“I think the headline here is the environment that we operate in, particularly in New York City, is not conducive to reducing shrink just based upon everything you read and see on social media and the news in the city,” he said.

“Our goal is to stay in the communities. We’re piloting, looking at how do we just operate a pharmacy only and as a pharmacy prescription-only format in some of the communities. We have to — and the community wants us to do this. We’re looking at literally putting everything behind showcases to ensure the products there for customers who want to buy it. And then lastly, we’ve even had to go to the extent of using off-duty police officers in some of our stores.”

Rite Aid made the decision to close a store in the Hell’s Kitchen area of Manhattan after the store suffered losses of more than $200,000 in stolen merchandise over a two-month period, reports the New York Post.

An employee at the store told the Post, “They come in every day, sometimes twice a day, with laundry bags and just load up on stuff. They take whatever they want and we can’t do anything about it. It’s why the store is closing. They can’t afford to keep it open.”

A Business Insider report cites data from the New York Police Department, which shows that petty theft has gone up 42 percent year-over-year and robbery and burglary cases have also jumped significantly.

DISCUSSION QUESTIONS: Does it make sense for Rite Aid and others operating in high crime areas to put all product behind showcases? Is operating pharmacy-only locations the answer?

"No, no, no. Retailers must treat their partners like customers not convicts. If shrink is a major problem, raise prices to offset this cost of doing business."

"Despite some of the ethical issues implied here, the alternative is underserved communities."

15 Comments on "Should Rite Aid put its stores under lock and key?"

As sad as it is that it is even necessary, it makes sense for Rite Aid to protect its inventory from external theft until the problem, on a store-by-store basis, subsides. These social problems are always best solved by addressing the root cause(s). Obviously Rite Aid believes that there is enough good business, even in these challenged stores, to keep them open — even with the added capital expense of protecting all merchandise.

This is deeply inconvenient and frustrating for customers. However when crime is out of control in some cities what choice do retailers have? Ultimately it is the responsibility of the police, the justice system and local government to deal with the spree of shoplifting and, unfortunately, some are far too lax in dealing with the issues. Shoplifting may seem like a small crime but it isn’t. It has costs attached, including the deterioration and degradation of areas if retailers elect to move out.

If a law is not enforced, you really don’t have a law.

This isn’t a problem that Rite Aid can solve on its own. This is a community-wide issue. Kudos to Rite Aid for trying to continue with much-needed pharmacy services in these markets. Sadly, to solve bags of merchandise going out the door, the only solution at least in the short term seems to be to lock down products. This drives up expenses for those stores, which means price increases in neighborhoods where residents can least afford them, perpetuating the problem. I hope that a combination of engaging community leaders and law enforcement can help to mitigate some of the issues. I believe that asset protection teams have emerging technology to secure high value products and to find patterns in criminal behaviors that can help to identify perpetrators and dissuade this activity.

The easy fix for enormous shrink would be to do what other retailers have done in high crime areas: cut your losses and close the stores. Instead, Rite Aid is still thinking about its customers; it’s admirable that the retailer is seeking options that will allow the stores to continue to serve the communities that need them. If that means pharmacy prescription-only format stores, and merchandising product behind glass, then that’s what needs to happen. Pharmacies are important to every community.

It’s an unfortunate nuisance, but putting goods behind showcases can prevent retailers from exiting high-crime areas. People in these neighborhoods still need access to health and wellness products.

Pharmacy-only stores are another option, as most thefts target front-of-store health and beauty items.

Our Duane Reade in NYC has locked half of the items. If you want the product, you push a nearby button, and an associate comes and unlocks the item. Those items are not the ones you would typically associate with a pharmacy. They are cosmetics, lotions, even cleaning products, likely high-margin products and high price items.

The brazenness of the shoplifters is astonishing. Several weeks ago, we wrote about Wegmans having issues with experiencing 20 percent of shoppers who use self-checkout. As I said then, this is a statement on our society and a very sad one at that.

It’s a sad case that CVSes definition of shrink has to be expanded to include robbery in the city of New York. Hopefully the proposed formats will allow them to continue operating in these difficult to operate areas. Unfortunately I expect that we will see reports of smash and grabs in some of these locations.

The fact that we’re even talking about this topic should sadden everyone, and it’s not just in NYC. Unfortunately, these incidents are happening in many urban areas around the country. I do think protecting products is a must for Rite Aid, if they still want to maintain a presence in an area where crime is rampant. If local police and communities can’t or won’t change policies regarding store theft, then who can blame any retailer for taking these measures to protect their businesses?

If communities want to retain valuable businesses, they’ll have to step up and prosecute and jail shoplifters. Bad guys will continue to steal if they know they can get away with it.

We may see a future where AI is used for customer recognition and weapon detection. There are already examples of these tools being used to solve related issues. Perhaps there could be a loyalty card link for individual customers to be identified as they enter, much like an ATM lobby. Despite some of the ethical issues implied here, the alternative is underserved communities.

No doubt certain stores – in certain high-crime areas – might need more security. I studied a retailer who had a hefty security system to deter theft. The cost of that system was more than what they were losing. At the same time, it irritated customers who had to open purses and check bags when they came into the store. The point is that the honest people were being “punished” for the sins of a few. It will be interesting to see if putting merchandise behind glass causes a drop in sales along with the drop in theft.

No, no, no. Retailers must treat their partners like customers not convicts. If shrink is a major problem, raise prices to offset this cost of doing business. Provide aisle helpers to help customers find and purchase products. But don’t put the products under lock and key.

It makes sense if the store can be profitable that way. This is a store-by-store exercise that only those privy to such data can answer: there’s no point in making sweeping statements, particularly given the vague terminology (define “high crime”).

I’ve long argued that companies would accomplish more toward equity goals by operating marginally loss-making stores than by contributing money to empty gestures — and I still do — but that’s not quite the same as saying every such store should be kept open.

Hugely challenging problem, where to start? In gas or petrol as we say in UK, many of the world’s forecourts moved to a pay-before-you-pump model, while others let the customer fuel up, offsetting the risk of fuel theft with the joy of profitable sales inside their convenience store. For these retailers, new technology such as LPR and digital reporting is now riding in to the rescue, helping them raise the stakes for the drive-off offenders and with video sharing, they are getting great partnerships with law enforcement. Many crimes beyond the forecourt can be solved by the detailed images of the bad actors associated with known vehicles. So trying to think of a positive end to this Rite Aid story, perhaps technology such as face recognition, video analytics, digital locks and better reporting can ride to the rescue and help them unlock the lost sales from locking up.

"No, no, no. Retailers must treat their partners like customers not convicts. If shrink is a major problem, raise prices to offset this cost of doing business."

"Despite some of the ethical issues implied here, the alternative is underserved communities."